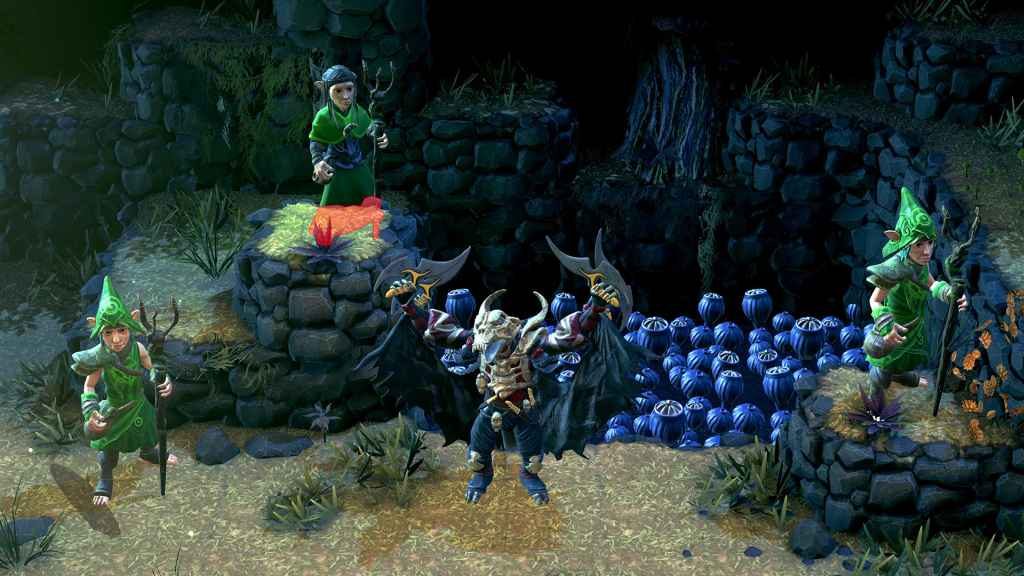 Until the early 2000s, video game tie-ins were just a matter of course for many entertainment properties. Any Disney film, Nickelodeon cartoon, superhero movie, or popular toy could be turned into fodder for a video game – and many were. But somewhere around 2005, this steady flow of licensed games slowed to a trickle. Perhaps due to the rising expense of game development, franchise tie-in games became passé.

But with this generation’s growing digital marketplace, licensed tie-ins are making a small comeback. Included in this small wave of licensed games are Netflix and developer En Masse’s recent television series tie-ins – 2019’s Stranger Things 3: The Game, and now The Dark Crystal: Age of Resistance Tactics.

While it may have been more intuitive for En Masse to throw together a simple platformer, the fact that it chose to develop a full-fledged tactics game speaks to the developer’s understanding of the property they are adapting. The Dark Crystal: Age of Resistance is a fairly dark, adult television program, and fans of the series would not have been pleased with a “kiddie”-oriented offering. The fact that this developer developed something as complicated as TDC:ART shows that they respect both the property and its fans.

While newcomers might feel a little lost at first, players familiar with tactics RPGs will feel right at home. All of the tenants of the genre are present, from a robust Final Fantasy-style job system to the grid-covered battlefield. Characters level-up, find better loot to equip, and gain better skills the longer they stay in a particular job. Everything works pretty much the way fans will expect it to, but over time, the seams inherent to a lower budget title begin to show.

While slightly rudimentary, the jobs system in The Dark Crystal: Age of Resistance Tactics solidly does its job. Early characters begin as one of three archetype jobs – soldier, mender (a healer/magic user hybrid), and scout (a ranged/DPS type). Playing with these three jobs works about as expected – though I did find the scouts to be a little squishy early on, getting smoked way too easily if enemies ganged up on them.

As battles are won, characters’ job levels go up, unlocking new and better powers. Though each job type has a number of great abilities, players can only choose three to equip, leading to some teeth gnashing decisions. At level five, players can add a secondary job to each character, allowing them to create hybrid characters. For my part, I made almost every fighter and scout take the mender job as their secondary, as having more healers on the field was extremely useful. Skeksis hit hard.

When a job reaches level ten, more jobs open in that category. For example, soldiers can choose between specializing in either offense and attacks, or defensive tanking. If players take the time to carefully plan, taking a mix of these secondary jobs to certain levels will eventually unlock super-powerful hybrid roles.

Later in the game, characters are added with more advanced jobs, but any character can be toggled into a different starter job at the player’s whim – though they will still have to level up any assigned job to access the sweet higher-end skills. This makes party planning and role assignment extremely flexible.

While some of the abilities that come with each of these jobs are extremely powerful, they are not represented in-game with any particular graphical flare. Symbols float around characters to indicate buffs or curses, for example, but they are small and unspectacular. While this fits into the subdued dark fantasy universe of The Dark Crystal, it doesn’t exactly make for a visually stunning game.

An additional area where TDC:ART lacks flair is in equipping new gear. While I’m sure it saved a ton of money and time during the development cycle, the fact that character models in-game don’t change when they equip new gear is a bit of a bummer. In the end, buying new gear is just an exercise in making the numbers go up, as the characters never look any different regardless of which robe or armor they are wearing.

The Strategy Is Solid And Workman-Like

The actual battles in TDC:ART are fairly solid and enjoyable. I played on Normal, the middle of the game’s three difficulty settings. At this setting, I was able to stroll through the opening battles fairly easily – but was rocked back on my heals a bit by the occasional boss battle wiping my party of gelflings.

Characters take turns in accordance to their speed stats. Having a character skip their turn bumps them up to return faster in the rotation. An action wheel pops for each character in turn, allowing them to move and then perform one action.

Interestingly, character elevation comes into play, giving players a hit advantage if they are on a higher platform then their target. But side and rear attacks make no difference, so the concept of choosing which way your character faces at the end of a turn is absent from the game – and working your way around to an enemy’s back is simply a waste of moves.

Various jobs can buff other characters or curse them, and of course, magic attacks play a strong role. But due to the fact that you can slap any job on any character, I eventually zoned out on who was who, and looked at my characters more as chess pieces than as actual characters from the show. Who the characters were didn’t matter in any particular situation; I only cared about what they could do at that particular moment. And since death in a battle had no permanence or penalty, sending a dude to certain doom carried no weight whatsoever.

What Makes This A Dark Crystal Game?

And in the end, that lack of identity was the primary issue. What is missing in The Dark Crystal: Age of Resistance Tactics is any sort of strong tie to the franchise that spawned it. Sure, there are a few slideshow-style cut scenes here and there, and the characters all look like their television counterparts, but honestly, this could have been a Buffy the Vampire Slayer tactics game, and it would work just as well. And in terms of each battle within the overall story arc, the stakes feel very low.

I’m not saying that TDC:ART is a bad game; far from it. This is a solid tactics game that engaged me for the duration. But beyond the appearance of the protagonists, enemies, and backgrounds, there isn’t much that identifies this as a Dark Crystal game. In coming up with a good tactics adaptation of the franchise, this team has created a template that almost any licensed property could be slapped on and work just as well. I’m not sure if that’s a good or a bad thing.

The Dark Crystal: Age of Resistance Tactics is now available on the PlayStation Store.

The Dark Crystal: Age of Resistance Tactics is a competent tactics game that doesn’t rely on its license for much beyond window dressing. Though the gameplay is entertaining and works well, there is little in this game that ties it strongly to property that spawned it. TDC:ART will be great for tactics fans that are looking for an inexpensive diversion, but Dark Crystal fans might be disappointed by the game’s underwhelming presentation.