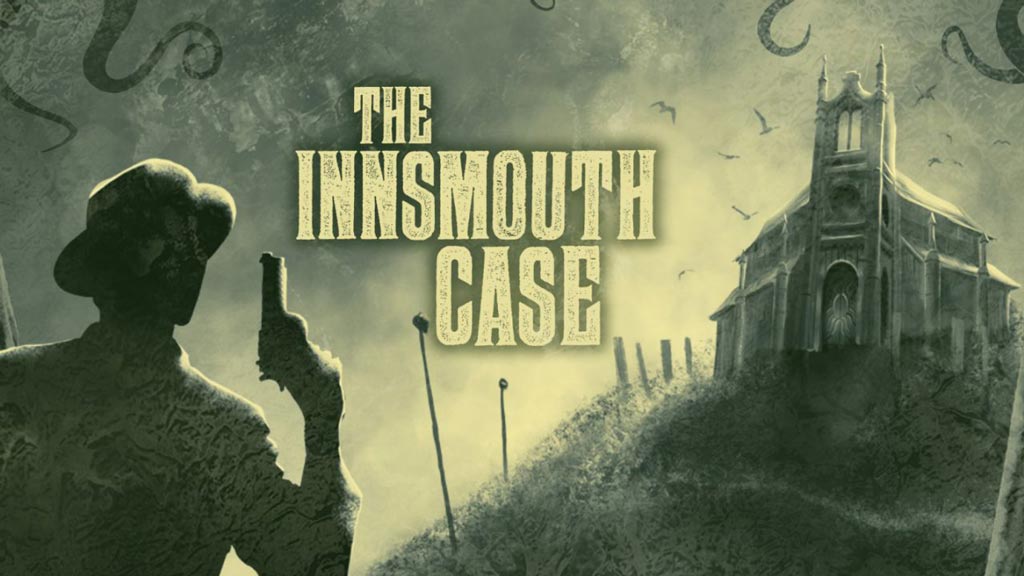 The Innsmouth Case PS4 Review In 1984, my 13 year old self excitedly purchased a copy of The Quill for my Commodore 64, a text only adventure game creator which allowed users to mimic their favourite Infocom interactive fiction games such as Zork and Deadline. Being a huge fan of the Fighting Fantasy (choose your own) adventure books, I set about creating ‘Death School’, where players used multiple choice options to try and navigate a school day without being butchered by the deranged teachers. Filled with risque teenage humour alongside the over the top death descriptions, ‘Death School’ was a big hit among my friends.

Fast forward 37 years, it appears that German developers RobotPumpkin Games have indulged their own teenage humour with a text-heavy adaptation of HP Lovecraft’s horror novella ‘The Shadow Over Innsmouth‘. But does it titillate and chill in equal measures?

The story begins in the dirty and ramshackle office of your Private Investigator who ticks all the generic cynical loose-cannon boxes from the off. You are soon disturbed by an alluring visitor who implores you to investigate the disappearance of her daughter in the seaside town of Innsmouth.

After some optional flirting, you’re soon off to the town aboard a clapped out bus along with some strange other passengers. Once off the bus, your options open out to explore the various locales and to meet and chat to the increasingly deranged inhabitants. 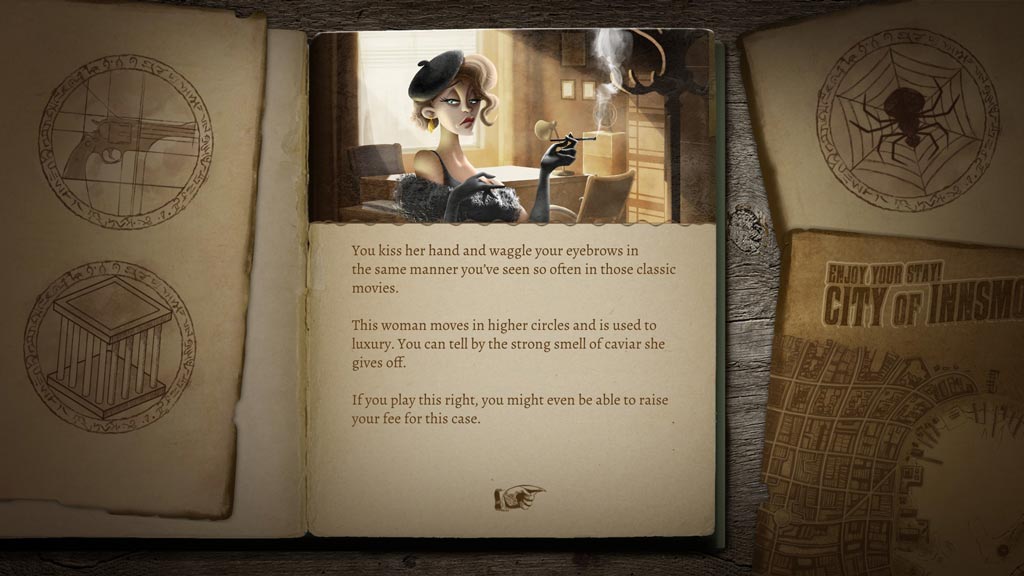 The beach, harbour and town all lead to interactions with the odd residents and the game has plenty of one way forks off the main story which often lead to a threatening scenario from which your character ends up suffering a comedic death at the hands of the local hicks or mysterious aquatic creatures.

Trial And Error Of Judgement

Dialogue multiple choices are interspersed with investigative options, the former occasionally leading to new locales should you chose the right things to say. Often an inaccessible branch of the story is hidden in a maze of dialogue with little in the way of logical explanation meaning that trial and error are the name of the game here.

When you hit one of the 27 endings (usually deaths), you can restart from the checkpoint list on the main menu but you still have to wade through pages of dialogue that you’ve already read. The map of the town highlights areas that you’ve yet to reach but finding them usually involves trying every dialogue option hoping it will open up the new route in. 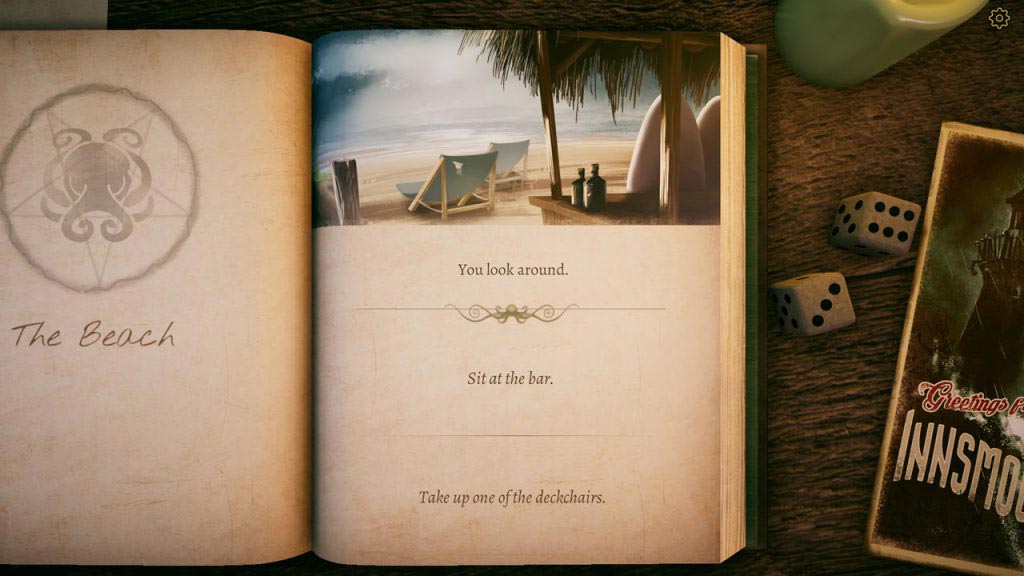 The text is presented as an old book with small stylised animated illustrations of either the comedic inhabitants or your current location, the latter of which are well drawn and very atmospheric in conjuring up a sense of place. Despite the modern setting the general vibe of the town seems more fitting for the original Lovecraft book which took place in the early 20th Century. Talk of mobile phones and arcade games seems oddly out of place and tends to jar with the overall atmosphere.

Completing the main investigation on the missing child is easily achieved once you find the correct thread of choices through trial and error, but the solution is entirely devoid of logic and unsatisfying.

Exploring the town and finding out how to access new locations and ‘endings’ turns out to be main crux of the game and while completists may well have the patience to try every single avenue with repeated playthroughs, anyone who appreciates genuine puzzles or text adventure tropes will soon tire of the rigmarole. 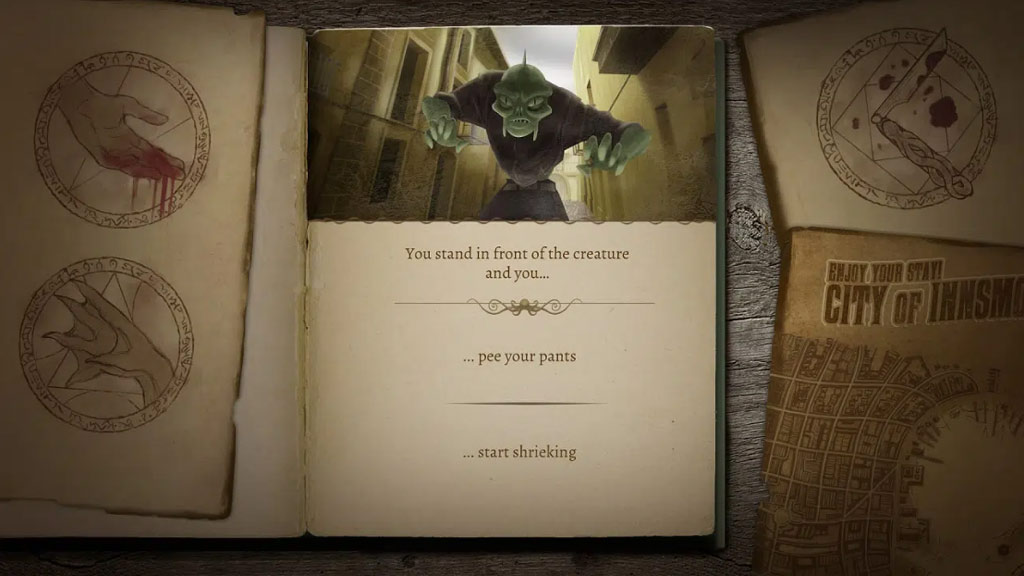 The humour is of an acquired taste, and the sexual references border on excruciating and seem totally unnecessary. Perhaps the adult content would have been more integral if the humour been left in the teenager’s bedroom and the developers had focused on producing a more chilling adventure closer to the original source.

As it is, the whole game becomes more a test of patience than a cohesive adventure, and the opportunity to make the most of a potentially chilling premise has been missed.

While there is room for all genres on modern consoles, the ‘Choose your own adventure’ text-based game seems more suited to the mobile phone platforms and the Switch rather than on a HD screen with a controller, but perhaps this niche title will find an audience who find the combination of bawdy humour and 1930’s horror an attractive proposition.

The Innsmouth Case is available now on PS4 / PS5

A promising adaptation of H.P. Lovecraft's novella is squandered with illogical solutions, childish humour and too many unsatisfying endings. Completists may enjoy finding all the content, but old school 'choose your own adventure' fans should look elsewhere for their fix of interactive fiction.