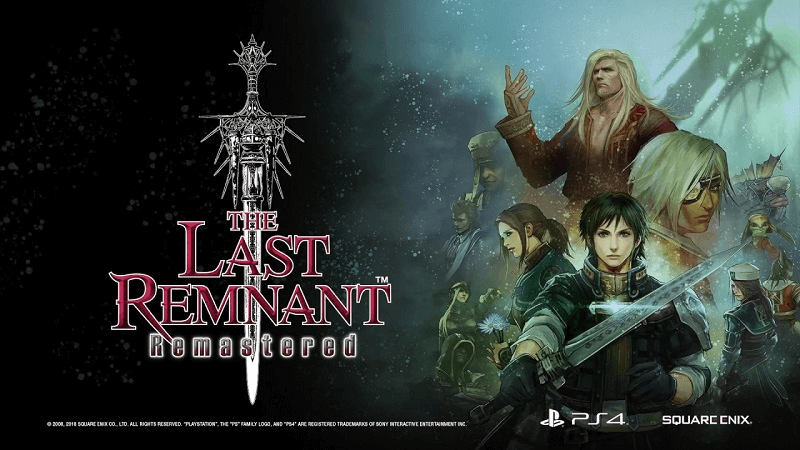 The Last Remnant begins behind main protagonist, Rush Sykes. Rush is a typical main character: He questions everything, he has issues with how the world works, and he wants to save someone. That someone is his sister, Irena, for whom he is searching as the introduction rolls in. Rush is given very little of the limelight as the focus of the story ultimately moves away from his rescue attempts and focuses more on the political scene that has taken over the realm. While the events in Rush’s life are generally uninteresting, the overall premise and fiction within the world is quite palpable.

In a general sense, the realm is in a back-and-forth in regards to Remnant users. A Remnant is a mysterious power only certain individuals can wield. This causes division within the populous, as expected, and great conflicts sprout up along the way in result.

This is the meat and potatoes of The Last Remnant Remastered. Most zones are generally quite empty and linear, mostly directing Rush from one end to the other for narrative beats. This favors the overall game formula, as the product as a whole offers minimal direction in the early hours. The narrative has its ups and downs, and it showcases quite intriguing villains. In this way, The Last Remnant has similarities to Final Fantasy XII. However, combat is really where it’s at in this game.

Engagements are turn-based, allowing for ample time to assess the battlefield. Decisions are not simply an approach and attack either. These are war zones, and tactics are crucial to success. You can flank opponents, and you can be flanked. You can intercept flanking opponents, and opponents can intercept your flank. Performance affects an overall morale bar, and damage output increases as morale swings in your favor. Conversely, damage output decreases as you lose morale. Success is every bit dependent on stats and armor as well as thoughtful tactics.

Tactical combat works so well in The Last Remnant

Allies you assist along the way can be hired for combat. From there, you assign them to unions, what the game calls battle regimens or teams. You can establish their formations, customize and create their gear, and adjust each unit’s position within their respective union. The game does a great job indicating how each choice affects stats, which enables exploration with settings and units.

However, the game offers very little in regards to instruction here, which is the status quo for most of the game. Considering this is a nine-year-old game, chances are that you either already know the ins and outs of this game or you haven’t heard of it before. I was somewhere in between, as I never had the means of playing The Last Remnant in its original PC and 360 formats. I did, however, do a lot of investigating over the years, so I had some know-how.

With this in mind, learning on my own yielded more excitement when I successfully won an engagement. Countering large groups of unions took a great deal of trial and error, but the act of learning the hard way ultimately paid dividends in the long run. Even though combat moves rather quickly, many engagements go on for fifteen- to twenty-minute stretches, so losing has a lot of weight to it. All in all, the learning curve here is far from egregious, but The Last Remnant may turn away those looking for a pushover RPG.

The Last Remnant is both flawed and unique

Overall, The Last Remnant has its own appeal. Combat is refreshing and engaging, and the fiction and world-building hold a great deal of potential. The game does less than the bare minimum to explain how things work within it. However, with time and effort, The Last Remnant Remastered has a unique quality all its own that all RPG fans should experience. It has been a long wait for yours truly, but I’m glad it’s finally here, even with its faults.

The Last Remnant has its inherent flaws. However, there is plenty there to engross any RPG player, old or new, who needs something else. The game offers little direction and limits itself narratively, but trial and error can help polish off the rough enough to see its glimmer.