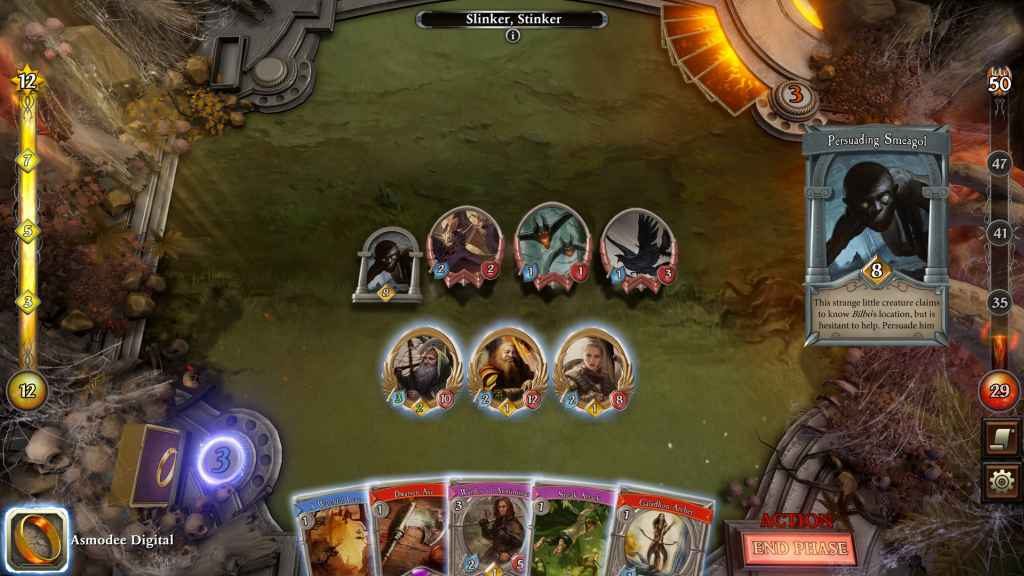 The Lord of the Ring: Adventure Card Game is not what you expect. At first glance, screenshots would give the casual observer the idea that LOTR:ACG is a Hearthstone clone. LOTR and Hearthstone share a few mechanics, but in reality the two games are so far from each other that I would hesitate to even consider them in the same genre.

Where Hearthstone (and its numerous clones) are essentially PVP experiences, LOTR is a dedicated PVE game, with no PVP elements at all. While there is indeed multiplayer, The Lord of the Rings: Adventure Card Game is cooperative, not competitive. The only other player you will be competing against in this game is Sauron – and let me tell you, he is an absolute savage.

The Lord Of The Rings: Adventure Card Game PS4 Review

Wow, This Narrative Is Weird!

Instead of pitting you against other players, LOTR is much more interested in telling stories – strange Lord of the Rings mash-up tales that purport to take place between The Hobbit and the Fellowship series.

I’m not a huge LOTR fan, but like most geeky types, I have a passing knowledge of the story and characters. But it took me a little while of listening to The Lord of the Rings: Adventure Card Game’s admittedly well-told stories before I realized that I was listening to fan-fiction. Should Bilbo be running around the woods fighting spiders and bats with Gimli? Probably not.

It is interesting that the development team at Fantasy Flight Interactive decided on this path, because LOTR fans are notoriously prickly about narrative accuracy, and inaccurate narrative is an enormous part of this game. Before each hand, the player is treated to two-three minutes of fully voiced original storytelling. This game talks – a lot. It’s not bad, it’s just odd.

This story content frankly feels like distilled Tolkien, with the characters and locations all ringing somewhat true, but somehow scrambled. Its as though the team took a couple of Tolkien books, tossed them into a blender, poured the resulting pulp into a tray and baked it. The ingredients are all correct, it just feels a little off.

But setting aside the pervasive narrative weirdness, the core of LOTR:ACG is a pretty solid – though consistently challenging – collectable card game. The player’s decks are based around three powerful “Hero” cards – each of which brings with it special abilities.

These three cards are granted to the player at the outset of each quest, giving the player an immediate advantage. This one heals another character each turn, that one gains extra attack power when an ally is injured. These cards carry some of the highest stats in the game, so it behooves the player to keep them alive. Lose a hero card, and it’s pretty much game over.

In addition to Hero cards, the player also has a number of allies (drones, pawns, whatever you wanna call them) in their deck which stack on the playfield with their heroes. There are also Events – which are akin to spells, played and discarded. But my favorite cards are attachments; weapons and armor that can be attached to a hero or ally to raise attack or defense, or grant special powers.

Deck construction is interesting. The heroes are divided into four types – Leadership, Lore, Spirit, and Tactics. When putting your deck together, you can only use cards that match your hero types. There are also many cards that require more than one hero of the same type – you would need two Spirit heroes to add some of the more powerful heals to your deck, for example.

This dynamic makes for some challenging decisions when constructing a 30-card deck. Do you want a jack-of-all trades deck, or risk a specialized deck that focuses on attacks at the expense of heals or defense?

The game plays much like one would expect, with the player alternating turns with Sauron. The content of the game is divided into “quests”, with each quest taking place over around five locations. Finish the objective at one locations, and you travel to the next.

That means that your deck must survive five encounters with Sauron, with damage to your heroes and allies carrying over from location to location. It is quite possible to burn out at the first location, moving to the second with your heroes near death and your allies depleted.

Some Frustrations Emerge – But Don’t Sink The Experience

I do not exaggerate when I say that I rarely defeated a quest on my first try (after I completed the robust, but less challenging tutorial). It often took me several attempts with different decks to defeat a quest, and I was often stymied at the very last minute by the dang “Threat Meter”, being forced to start the entire quest over again.

The Threat Meter is a timer of sorts, sitting ominously on the right of the screen. As a quest wears on, the threat against Sauron grows, gaining more and more of his attention. At various levels of attention, this meter will grant Sauron a special move – which can absolutely wreck your party. And if the Threat Meter makes it all the way to the top, the player instantly loses. This adds an element of timed tension to the proceedings, but it also sometimes feels unfair.

To combat the Threat Meter, the player is provided a Fate Meter. In a similar manner, bonuses are granted when the Fate Meter hits certain plateaus. But these bonuses don’t feel as powerful as the barn-burning prizes Sauron is granted, compounding the frustration.

If you are getting the vibe that I thought this game was pretty tough, you are reading me correctly. Players must stretch their resources to the very limits, leaving their party limping and scraggly by the time they (maybe) collapse across the line to victory. This difficulty adds some longevity to the campaign, but it also feels punishing at times.

Why Do I Need To Be Online, Exactly?

Also punishing is the fact that The Lord of the Rings: Adventure Card Game is an “always online” title. I have no idea why, but this game demands that you be in constant contact with its servers to function. For a game that requires maybe 45 minutes to run through a quest, this is wildly detrimental. I’m the sort of gamer that is constantly interrupted by family, and the inability to suspend a single-player hand and come back to it later is infuriating.

As the multiplayer is limited to co-op (and I wasn’t able to find anyone to play with during my review period), I can see no reason why this game couldn’t be detached from the servers and enjoyed offline. It’s frankly a little bewildering.

But for players willing to put up with the weirdness of slavish online demands and a meandering narrative, there is a mighty decent CCG hiding in here – and one with no microtransactions or money-grubbing tactics to tempt you into paying more than you should. The strategy is LOTR:ACG is solid and challenging. There are tons of mechanics that I didn’t touch on here for lack of space – but trust me, this game runs pretty deep.

For those folks that enjoy playing the story modes of other CCGs but shy away from multiplayer, this is a no-brainer. And tactics and strategy fans will find a lot to love here. But hardcore Lord of the Rings fans should enter with thick skin and blinders, because the “Adventure” in “Adventure Card Game” is surely going to have them slapping their foreheads in disbelief.

The Lord of the Rings: Adventure Card Game is now available on PlayStation 4, Xbox One, Nintendo Switch and Steam.

With a strong focus on storytelling, The Lord of the Rings: Adventure Card Game is a PVE collectable card game that will challenge – and sometimes infuriate – card game and strategy fans. While the “always online” demands and the original storyline are bewildering, the gameplay itself is deep and entertaining. Just be ready to shake your head when Sauron whoops up on you at the last minute. Stupid Sauron.

The Lord of the Rings: Adventure Card Game