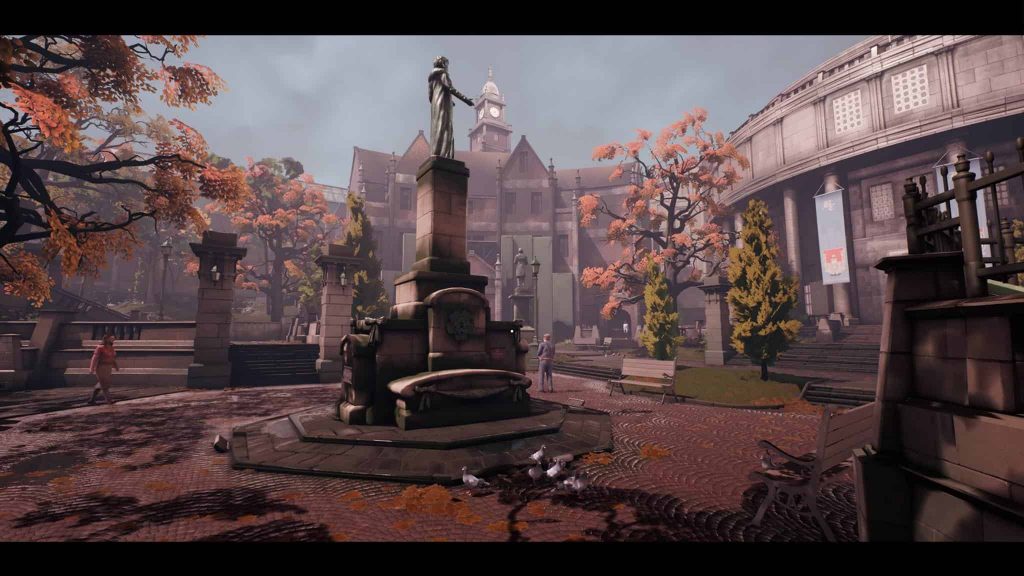 How many PS4 games can you think of that put you in the shoes of an investigative journalist, in 1980s dystopian Great Britain who seeks to discover the conspiracy that lurks behind new, freedom-stealing legislation? I’d hazard a guess that the answer lay somewhere in the locale of ‘none’. However, while The Occupation is very much an effort that forges its own niche, and is very easy to like on just its conceptual merits alone, a swathe of technical issues and some odd design decisions undercut what should otherwise be a sterling take on the detective genre.

The Occupation weaves a uniquely British and dystopian political thriller

Before all of that though, at the beginning The Occupation at least puts its best foot forward. As an investigative journalist who must uncover the shadowy strings which have propped up the new Union Act – draconian legislation aimed at curtailing freedoms in the wake of a suspicious bombing, it is up to you uncover the truth and unravel the conspiracy.

How you go about doing this broadly speaking, is by snooping around offices, hacking into computers, eavesdropping on conversations and more in order to build evidence to flesh out each of your leads. And this is where the primary appeal of The Occupation comes into play – the manner in which you collect evidence to substantiate your leads and lines of questioning are entirely up to you, and as such, The Occupation really makes you feel like an investigative journalist who is capable of exploring every avenue in pursuit of the truth.

Viewed from the first-person perspective, there is no combat in The Occupation, instead the onus is one that is very much on stealth and the avoidance of any kind of confrontation, since, well, you’ll be snooping in places where you really shouldn’t be. Where The Occupation ups its game in comparison to other titles where stealth is employed however, is in the various denizens that populate each area.

Rather than just being a bunch of repeat pattern following goons, every character that you’ll meet in The Occupation has a personality and background that directly influences the schedule that they follow. For instance, one of the guards, Steve, has been taking acting lessons and can often be found distracted – reciting lines from his latest script or hilariously butchering quotes from classic films.

Elsewhere Dan, the head of security, is a Scottish practicing Muslim and though stern and resolute, he takes breaks to go and pray – and it’s during this time that you’re more likely to go about your clandestine activities uninterrupted. Then there is the notion of chaos which can throw a figurative spanner into the works of these schedules – an unexpected toilet or coffee break can disrupt proceedings and thus force you to think on the fly. It’s a great system that ultimately makes it much easier for the player to buy into the fact that they are snooping around an place populated with actual people that take part in believable, task-driven schedules.

Then there is the setting of The Occupation. As I’ve alluded to previously, the dystopian, 1980s Great Britain shtick hasn’t really been done in games before; let alone one where the player takes control of an investigative journalist. Certainly, the British 80s setting is evocative and reminds me a touch of the mid-80s BBC drama Edge of Darkness (the original, and not the Mel Gibson star vehicle) – a geopolitical thriller where a man investigates the killing of his daughter that is intertwined with an Anglo-American conspiracy involving a nuclear facility.

Despite its grim political heart, The Occupation never feels like it’s gloom-mongering. Instead it gives players a front row seat at the inner workings of its policies, many of which will be familiar to folks living in the UK right now – a fact borne out by the fact that developer White Paper Games is a UK based team themselves, effectively resulting in art imitating life (or something like that).

Anchoring the story is the manner in which The Occupation is structured, too. When you’re not doing the investigative journalist thing, you’ll instead be taking part in much more linear, story-driven sections that seek to drive home the tragedy behind those killed by the explosion which caused the Union Act to gain any sort of traction in the first place. Though straightforward, these sections do a commendable job of soliciting apathy on the part of the player and really make you feel for those lives who have been destroyed by this tragedy and their pointed fury at the alleged conspiracy that lurks behind it.

The Occupation is certainly an offering not lacking in ambition then. However, it is under the weight of that very same ambition that the game also struggles at often significant detriment to the overall experience.

Largely restricted to the investigative, free-roaming portions of the game, The Occupation suffers badly from a range of bugs and other maladies that serve to undercut the enjoyment of its otherwise thrilling experience. For a start, though you can interact with just about everything in the environment, not all of it functions correctly as one might expect. An answerphone might, for example, have two messages saved into its memory that you can listen to. The thing is, when you attempt to listen to it, only the first message plays and then glitches out before the second, which is hardly ideal.

Another issue which is also tied directly into the UI is the manner in which your aiming cursor recognizes physical objects in the environment. Going back to the example of interacting with the answerphone, because the actual play button is a ways away from where its physical location should be in the world, you need to move your cursor far away from where the object actually is to use it. Sadly, this is a glitch which can be seen on a variety of other points of interaction in the environment too, such as safes and computers that in turn makes using those devices much more of a chore than it should be .

Much more egregious however are the occasional game-breaking bugs that sometimes crop up. In one such scenario Steve, our trusty security guard, caught me scoping out the inside of an office. Now, the way the AI works in The Occupation is that it’ll give you a slap on the wrist if it catches you once somewhere you shouldn’t be, with future infractions resulting in you being dragged before BIG DAN for a dressing down. The problem here however, was that Steve caught me and asked me to leave but he was stood in front of the door and would. not. budge; resulting in an untimely restart of the entire level (more on that in a bit). Cue much teeth-clenching.

Away from the numerous bugs and defects, The Occupation also suffers from a variety of performance issues too. Tested on a PS4 Pro, massive framerate drops were observed in outdoor environments which in turn were compounded by some of the worst, most vomit-triggering motion blur I have seen in quite some time (luckily, you can turn it off – and you should).

Though The Occupation is clearly a stealth title at its heart, there are a number of design decisions which have been made that work against these aspirations. For a start, there is little indication that someone has found you, until they actually do. To this end, a growing Hitman-style detection indicator would have been welcome, because as of right now folks can seemingly appear from nowhere and catch you in the act, which very often seems more than a little unfair.

Another aspect of The Occupation’s design which might grate is the manner in which the investigation sections are handled. With a focus on gathering evidence for leads against the clock (in-game time passes in real time), The Occupation has a real pressure cooker feel to it where you have to be very clever and efficient in how you gather your clues by discovering new characters, conversations, secret routes and a great deal more besides – lending The Occupation a great deal of replayability in the process.

Where this falls down a bit, is when it comes to the save system. Instead of being able to save whenever you want, the unyielding autosave system only kicks in at the end of each of these investigation levels, meaning that if you need to restart, you’ll lose all your progress. Sure, this might be acceptable from the standpoint of making the game feel like a challenge, but should you find yourself on a tremendous run and then you run into one of the game’s many bugs which prompt a restart, that is by comparison… far less fun.

The Occupation is a couple of patches away from greatness

The fact that there is so much to like about what White Paper Games have wrought with The Occupation doubly underscores the frustrations I felt on account of its array of shortcomings. With some superb voice acting, a palpable sense of place ensconced by some incredible architectural design and just the sheer sensation of being an investigative journalist who must unravel this deep seated political conspiracy – much of it just feels fresh and most of all, right.

The Occupation has so much going for it; I just really, really wish that the menagerie of technical problems didn’t compromise almost everything else developer White Paper Games has achieved here. And really, though there’s nothing here that can’t be addressed by some serious patching, as it is, The Occupation just isn’t ready for the front page yet and that is a damn shame.

Developed by White Paper Games and published by Humble Bundle, The Occupation releases for PS4, PC and Xbox One on March 5, 2019.

Review code kindly supplied by publisher. This review was written against a version of The Occupation that had the Day One patch installed.

A superb, smart and taut detective thriller lay beneath the stack of technical and design issues that The Occupation has, it's just a shame that, in its current form at least, those shortcomings are at the forefront of the experience.