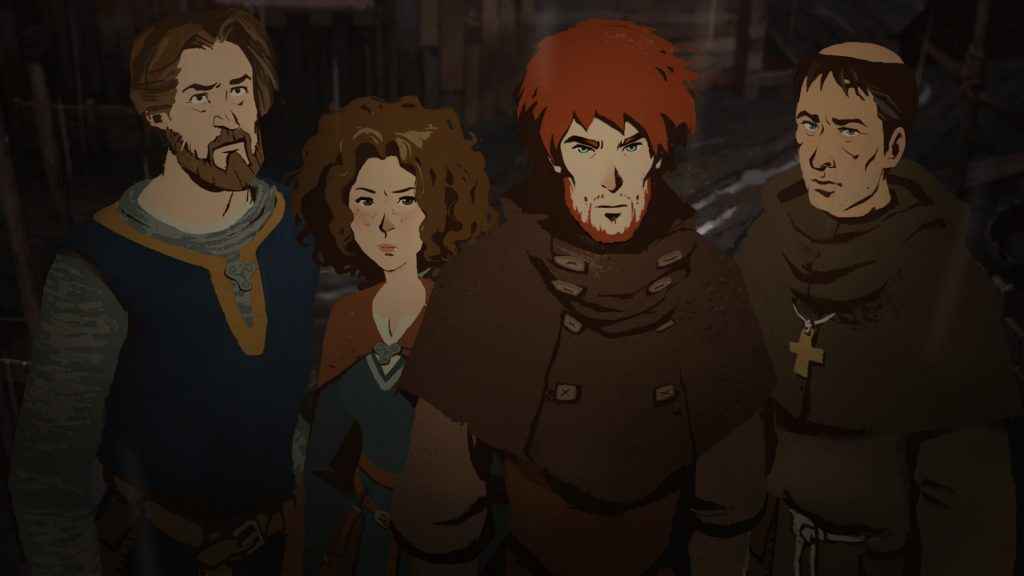 The Pillars of the Earth Book Three review code provided by the publisher.

Within the space of less than a year Daedalic has started and ended its three episode strong adaptation of Ken Follett’s historical fiction opus, The Pillars of the Earth. A more leisurely and ponderous take on the interactive adventure than PS4 owners might typically be accustomed to, the series has thus far been hallmarked by breathtaking visuals, great voice acting and an array of interesting characters wound around an even more compelling narrative. The conclusion to the series, book three, subtitled ‘Eye of the Storm’, does little to subvert or expand the template lain thus far, but what it might lack in innovation it makes up for by finishing up one of gaming’s most overlooked interactive adventures with bespoke flair and verve.

Eye of the Storm begins with a front-loaded and heavy focus on troubled former noblewoman Aliena as we witness her flight from England and across Europe as she searches for Jack Jackson, the love of her life and father of their child. Though Eye of the Storm ultimately sticks rigidly to the template established by previous episodes, the fact that it spends so long in the early going exploring foreign lands, peoples and cultures means that stands somewhat apart from what Daedalic has given previously.

Of course, by transplanting so much of the narrative onto foreign soul it gives Daedalic’s fantastic team of artists substantial creative latitude to show off their talents and naturally, they oblige emphatically. Whether it’s a bustling, picturesque port in Cherbourg, or the breathtaking bevy of sights encompassed by the Camino pilgrim trail, Eye of the Storm’s massively varied selection of locations are realised with such painterly opulence that The Pillars of the Earth final episode is arguably the best looking of the whole lot.

As the concluding instalment in the trilogy, Eye of the Storm is hugely ambitious from a storytelling perspective. Packing in three generations of characters, more locations than the previous two episodes combined and tying up a great many loose ends, Eye of the Storm gets a lot done within its four hour duration, but invariably not all the narrative bases can be covered quite as thoroughly as we’d like them to be. Perhaps the biggest victim of this is the character of Alfred Builder who, despite featuring prominently in the previous two episodes, is both nowhere to be seen in Eye of the Storm, nor does he have his story concluded satisfactorily.

Beyond such issues with uneven character development, Eye of the Storm nonetheless roundly entertains and satisfies in its conclusion of Ken Follett’s tale of medieval strife. Indeed, nearly a year after the series began on PS4, there still hasn’t been an interactive adventure quite as grounded as The Pillars of the Earth, and its final episode puts an exclamation point on that fact, weaving a slow-going and considered but ultimately fulfilling yarn that absolutely deserves its place alongside genre contemporaries such as Life is Strange and Telltale’s The Walking Dead.

To reiterate then, The Pillars of the Earth is not about fancy cinematics, an abundance of QTE fight sequences or obvious binary choices, it is instead an affair where the painterly art drips off the screen and makes you wistful for nature’s real-life embrace, it’s a story where war, poverty, religion and politics seamlessly coalesce and finally, it’s an experience where you observe its deep cast of characters meaningfully and sensibly evolve over tens of years. Simply, there’s nothing quite like The Pillars of the Earth on PS4.

With the source material clocking in at just over 1,100 pages, and more than just being a superb interactive adventure in its own right, Daedalic’s skilful and careful adaptation of Ken Follett’s arguably most recognisable series of novels also serves as an effective and eye-opening gateway into Follett’s engrossing fiction, too. Source material accessibility aside though, Eye of the Storm stands as a great conclusion to The Pillars of the Earth and one which helps underscore the entire trilogy as a must-have for fans of interactive adventures everywhere.

If you enjoyed this The Pillars of the Earth Book Three review, you can check out our reviews of the previous two episodes below.

The Pillars of the Earth Book One review

The Pillars of the Earth Book Two review

Eye of the Storm is a tremendous finale to The Pillars of the Earth on PS4 and one which underscores the series commitment to grounded storytelling, sophisticated characters and mature storylines.

The Pillars of the Earth Book Three