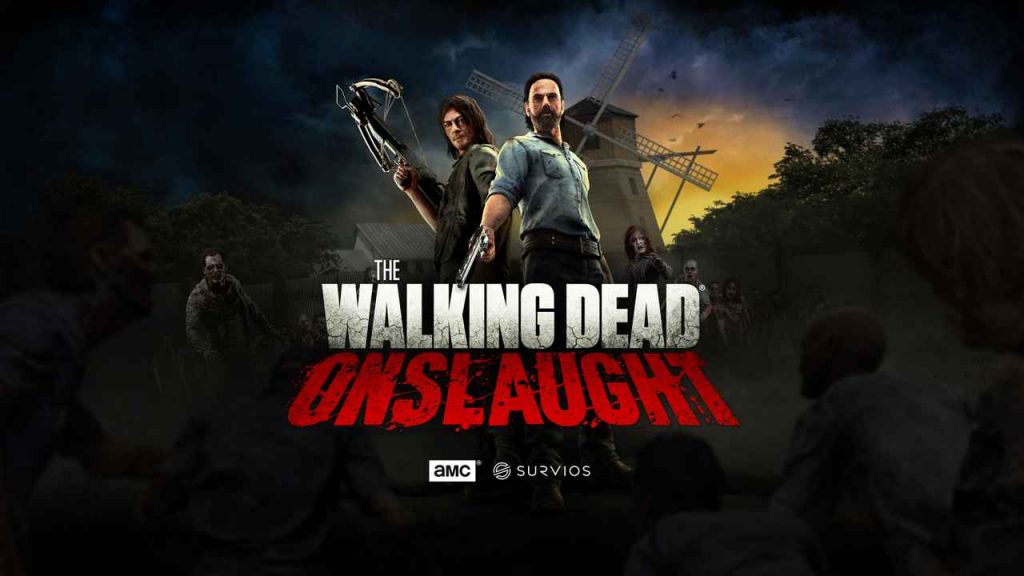 The Walking Dead Onslaught Review (PSVR) – Survios, one of the premier developers of quality PSVR experiences, is back with a bloody vengeance. Having delivered some of the very best PSVR games to date (Electronauts, Creed: Rise to Glory), Survios has an amazing track record. But this year has been challenging – Survios found itself in the difficult position of developing one of two parallel Walking Dead VR games to be released in 2020.

After the successful release of Skydance Interactive’s The Walking Dead: Saints and Sinners, Survios was forced to consider how they could differentiate their game from the very high-quality competition. Survios pivoted from their original concept of a multiplayer slash-‘em-up to a more story-driven approach. I’m happy to report that Survios’ efforts were very successful, resulting in a game that takes place in the same fictional universe, but feels very distinct from – and every bit as fun as its predecessor.

“Daryl, We Have A Responsibility Here…”

The obvious surface-level differentiator between Onslaught and Saints and Sinners is that Onslaught has access to the assets from the long-running AMC television show. Taking place between The Walking Dead Seasons 8 and 9, Onslaught details a previously untold story about Daryl, TV’s favorite crossbow-toting biker. Daryl has just returned from a supply run gone wrong, and Onslaught is constructed around the framework of Daryl being interrogated by Rick Grimes about his decisions.

Beyond a constant urge to scream at Rick to just shut the hell up (God, what a self-righteous prick), the flashback structure of this story works amazingly well. Having secured the voice acting services of Norman Reedus, Survios sprinkles story sections with Daryl’s wry observations, allowing the player to understand his motivations as he scrappily battles his way through some truly dire situations. The writers clearly have a great grip on who Daryl is, and he feels genuine and true-to-character throughout the entire game.

Much of the success of The Walking Dead Onslaught is its embrace of the zombie apocalypse as portrayed on the television show. A ton of the game takes place in bright sunshine, a direct contrast to the foggy doom and gloom of Saints and Sinners. Daryl fights his way through bright city streets in extensive set pieces, and the design of these levels is utterly superb. I often found myself taking the time to explore areas after clearing them of enemies, reading posters on the walls and enjoying the attention to detail.

In one area, Daryl fights his way through a neighborhood brewery glimpsed in the background earlier on. After bursting through the doors into the bar, Daryl makes his way through an outdoor patio area. Eventually, he finds himself on the production floor, filled with giant brewing tanks. It is entirely possible to rush through this section, utterly unaware of the fake beer branding and theme that has been carefully constructed throughout. In a lessor game, this could have been a generic factory or warehouse. But instead, we are treated to…well, the closest I’m going to get to a trip to a brewery in 2020.

As the game progresses, Daryl’s story unfolds and gradually intensifies. I found myself anxious to see it through to the end, much the way I would feel when watching a stand-alone episode of The Walking Dead. Choosing Daryl as a protagonist was a wise decision, as the player finds themselves truly seeing through Daryl’s eyes during his arguments with the more stalwart Rick. This is a very entertaining game, but it also offers some unique character insights to the beloved television characters – a testament to the writing on display.

Much has been made of The Walking Dead Onslaught’s “progressive dismemberment” system, and rightfully so. Combat in TWD Onslaught is a bloody mess (you know, in a good way), and a ton of fun. Over 20 weapons slowly unlock as you play through the game, and great care has been taken to make every weapon feel unique. As I’m never a fan of fumbling with guns in VR when I have other options, I tended towards the much more visceral melee weapons, playing the majority of the game with basic knives, machetes, crowbars and axes.

When facing down enormous numbers of the undead, I would find myself backing into a natural chokepoint like a corner or doorway, then systematically slipping my hunting knife into the eyeholes of one zombie after another as they wandered up. This may feel like cheesing the game a little, but on the show the characters regularly stab zombies through holes in a fence to keep them from piling up, so I felt like I was behaving in a fair and canonical manner.

Each weapon has a number of upgrades that can be purchased – everything from increased damage to the random ability to pick up crafting materials upon killing baddies. But even at their most basic, these weapons have weight and heft, with zombie flesh rending appropriately when you hack into it. It is entirely possible to slowly dismember an opponent, and equally viable to slip a machete under the face shield of an undead SWAT cop for a quick half-decapitation.

Much like other Survios games, The Walking Dead Onslaught is deeply physical. Survios smartly offers a wide variety of locomotion options, which can be swapped at any time. After finding my usual go-to teleport to be unsatisfactory, I pivoted to the method that has you swinging your arms to move forward. This worked great for me, allowing a great deal of comfortable – albeit tiring – control. As a result, I had to clear the room of children and pets, as I would have surely brained someone with my incessant violent, flapping motions. The couch got punched – a lot.

Supply Runs Are A Ton Of Stressful Fun

Daryl’s story progression is tied to how well the player can manage supply runs. Individual chapters are locked behind the number of recruits you can convince to join your town – which translates gameplay-wise into how much food you can gather on supply runs. This might seem a little frustrating for those that want to mainline the story, but these supply runs are some of the best fun in the game, offering a unique and suspenseful gameplay loop.

Players are unceremoniously dumped out of a supply van at the end of a city street, with Rick hollering at them to get moving, as “the horde” is closing in. “The horde” is basically a wall of death that is slowly encroaching on the area – sliding relentlessly ever closer to the player. Think of the closing circles in battle royale games, and you get the point.

Players must dash ahead of the horde, creating enough distance that they can dash into buildings dotting the street to collect food and crafting materials. There is a constant push for speed, as some of these buildings are surprisingly deep and detailed, tempting the player to press further inside. Players must constantly weigh the need for goodies against the ticking clock of the approaching horde. Oh, and did I mention that these streets and buildings are full of zombies? Because they are. As the game progresses, these exploration areas become bigger and more intense, constantly forcing the player to make difficult choices while struggling to survive.

Often supply runs are capped by trapping the player in small open areas, where they must survive endless waves of the undead while waiting for the supply van to pick them up. This is where my proclivity towards melee weapons really paid off, as the hack and slash battle is so fast and furious I couldn’t imagine trying to reload a gun. There is nowhere to hide, and no doorways to crouch in. These levels are pure kill-or-be-killed action, and the tense combat is hilarious, scary, and mountains of bloody fun.

Rebuild Alexandria – Or At Least A Few Buildings

As you play through missions – and go on obligatory supply runs – you eventually gain enough materials to rebuild the settlement of Alexandria. It is here that The Walking Dead Onslaught stumbles ever so slightly. While you can occasionally see Carol stomping around in the garden, other recruited residents of your growing community are sadly invisible.

Adding new buildings to the settlement gains the player stat boosts, and the buildings pop up in the city surrounding your play area. But you are never able to go explore these buildings. The highlights of your experiences in Alexandria are your fireside chats with Daryl and an occasional visit with Michonne to set up supply runs. Beyond that, Alexandria is all branded menus and window dressing.

But with the care and detail that is taken with both the story sections and the supply run areas, I can’t really fault Survios for the lack of depth in this mechanic. This is a VR title, after all, and budgets can only be stretched so far. The Alexandria hub gets the job done, and allows players to catch their breath a bit between frantic runs.

Put The Walking Dead Onslaught In The “Good” Column

The Walking Dead franchise has spawned some legendary great games, and some equally legendary flops. The Walking Dead Onslaught is a great, unique take on this universe that deserves to be solidly lumped in with the “good” games. With some really great world building, fun and visceral combat, and some stellar character moments, this is one of those games that really throws open a door in reality and allows players to step into a favorite fictional world.

Just beware. The residents of The Walking Dead Onslaught are awfully bitey.

The Walking Dead Onslaught is out now on PSVR.

With a well-written story, fantastic world building, and great, bloody combat, The Walking Dead Onslaught is a fantastic companion piece to the beloved AMC show and a great VR game in its own right. Supply runs provide a perfect mix of speedy action and tense combat, while the narrative portions feel carefully and artfully constructed. While the VR-level budget peaks through on occasion, this is an amazingly well-made and entertaining game.