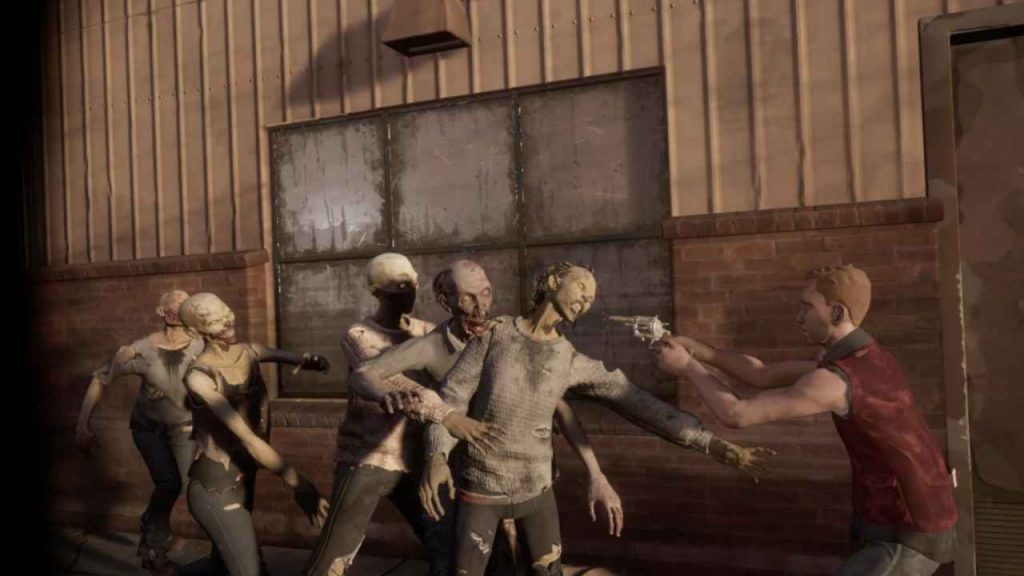 The Walking Dead: Saints And Sinners PSVR Review – I’ve been in this house for almost a half-hour. I know I shouldn’t linger, but I’m new to the zombie apocalypse, and there is so much stuff in here that I know will be useful to me that I can’t stop looting. I’ve methodically moved from room to room, opening cupboards and drawers, filling my backpack with anything that might help me survive. Cans of dog food and tuna, clocks and spoons. Anything that isn’t nailed down goes right into my bag.

I’ve already cleared the house of zombies, though I can still see a few shuffling outside in the street. I came here at the behest of a stranger, a woman I found standing alone in the street. She was desperate. Her husband has been turned – he was bitten and died, and he was now lurking in the attic of this lonely house. She needed someone to come to this place and put him to rest, returning his wedding ring to her as proof. In return for the favor, she offered the code to a safe in the house, and the promise of supplies.

I had taken care of the husband and procured the ring, but there was still so much to see in this house. I had been warned to get back to safety before the church bells rang. I was told that every evening, the bells would ring out across the city, riling the walkers and bringing them into the streets. But I had things to do, and I couldn’t help but linger.

Then it happened. A buzzer on my wrist began shrieking, and the bells began clanging all through the city. I looked out the window, and saw at least twenty zombies outside, where before there had been maybe three. My adrenaline surged, and I waited for the undead to come pouring into the house. And waited. And waited.

My patience never paid off. They never came inside. But for all my waiting, the zombies outside never settled down. It slowly dawned on me that, in order to get back to my home base, I was going to have to brave the streets. I crept down the main stairway (I had earlier pushed a zombie down these same stairs, clearing the barbed wire traps that were strung up haphazardly) and made my way to the door.

My plan was to open the door quietly and sneak back to the desperate lady, ducking between cars and hiding behind bushes. I slowly pulled the door open, and immediately one of the zombies on the street spotted me and started heading my way. It was soon joined by at least seven more.

I reeled backwards, pulling my gun and firing off some useless shots in my panic. The zombies surged through the doorway, knocking the doors off the hinges, and staggering into the foyer. I pulled my last weapon, a kitchen knife, and began thrusting it uselessly at the horde descending upon me. It was too little, too late. The zombies set upon me, and I was devoured. Damn it.

I respawned at my boat, on the edge of this neighborhood. All of my weapons were gone. My backpack with all my stuff was gone. The lady across the street was still standing there expectantly (and occasionally downing stray walkers with a shiv), but I had no ring to deliver. It was in my backpack, which was in the foyer of the house down the street. And the street, of course, was filled with zombies.

Long story short: I bitched out and took my boat back to my home base. The lady never got the ring back, I never got my stuff back, and the zombies ruled the streets for the rest of the night. I cautiously ventured back the next morning to find that the streets were clear. The lady was gone, replaced by a walker. I quietly crept around, collected some loot, and got the hell out of there. And that’s how my bitterly unsuccessful first mission in The Walking Dead: Saints and Sinners went. Sounds about right, doesn’t it?

The Systems In The Walking Dead Are Great, But Not The Point

I don’t want to spend too much time chattering on about the systems in The Walking Dead: Saints and Sinners. There’s a ton of information online that can tell you about the crafting system (deep, and fairly awesome), the mission structure (unforgiving, with insufficient save points), the controls (better than expected), or the combat (hyper-violent, satisfying, but a little bit uneven).

The systems in place are very unique in the VR space, and they are carefully constructed to support the idea that you are a lonely survivor in a hostile world after society has come crashing down. Everything in this game is built around that conceit – you are solely responsible for your own survival.

You receive missions either through contact with an isolated, endangered contact on the radio, or from contacts out in the world – and you have to risk life and limb to reach them. Absolutely nothing is handed to you in Saints and Sinners, and for most of the game you will be struggling against resource shortages that feel unfair at the start of the game – and get worse as the hours tick by. You will never have enough medicine to be healthy, or enough of the correct ammo to truly engage in a gun fight.

Zombies lurk around every corner (unless those rotten bells have rung, in which case they are openly swarming in the street). Every night when you go to sleep in your rather unsafe-feeling home base, you are awakened by a bleak greeting informing you that “Walker numbers have increased, and supplies have dwindled”. In other words, give up hope for a happy ending.

I am fairly well versed in The Walking Dead’s universe. I’ve read maybe the first hundred comics, petered out on the TV show around season six (and watched two seasons of the spin-off), and played the other video game incarnations. I am confident in saying that The Walking Dead: Saints and Sinners is the scariest The Walking Dead has ever been.

The comics feel like intriguing psychological studies of characters under extreme stress; for all the horror and action elements, they feel more like amazing character studies than terrifying horror. The television show feels a bit too glamorous to be truly frightening, with all those beautiful dirty people sweating and putting knives into zombie eyes. And the other video games are fantastic and moving, but not scary.

The Walking Dead: Saints and Sinner is scary as hell. There is no glamor here, and while there are interesting characters (and a nicely drawn story), the majority of the time is spent by yourself, creeping around in places where you shouldn’t be. The VR aspects of this game make everything feel real and immediate. You know you are playing a game, but that doesn’t stop your lizard brain from freaking out when ten of the undead are barreling down on you and you’ve allowed yourself to get backed into a corner.

You can feel the moisture in the air, the clammy emptiness of the graveyard, the humid stuffiness of the abandoned warehouses. It is this atmosphere that had me standing in the middle of the road with a pile of zombies dead at my feet, looking around with a sense of wonder and mourning. This version of New Orleans feels formerly alive, which is why it is so terrifying that it now feels so dead.

The Walking Dead: Saints and Sinners isn’t perfect. Texture pop-in is rampant, which can sometimes pull you out of the game. The inventory system can be exasperating. And the checkpoint-based Souls-like save system drove me bonkers – particularly when a glitch caused my PSVR to stop tracking my controllers correctly, and I lost a couple of hours of progress when I had to reboot to fix it.

There are times when the game feels too real, when supplies feel too limited, and when success feels almost impossible. This isn’t Far Cry; you can’t go running into a human outpost with guns blazing and expect to live long. With twitchy (and not terribly well-defined) stealth mechanics, this means that you are in for a lot of frustrating trial and error. That’s realistic, but it isn’t necessarily fun.

The Walking Dead: Saints and Sinners can be difficult and infuriating, but it also feels consistent and true to itself. Efforts have been made to make the world feel real and lived in. When you reach out to touch a character in the face (as I do in every VR game I’ve ever played), they shrink away, chastising you. Try it again, and the guns come out. That has never happened in another VR game, and it makes The Walking Dead feel special.

You can do surprising things in this game. Hell, you can murder the guy at the end of the tutorial. He is quickly replaced by another guy, and then another, and another after him. I killed a lot of tutorial guys (and the line of text that appears over his head the second or third time you kill him is one of the best laugh out loud moments I’ve had in a game for quite a while). The point is, the good touches far outweigh the occasional unfriendly videogame design, leaving me with very strong positive feelings towards The Walking Dead: Saints and Sinners.

The bottom line is, if you have a PSVR, and you have any interest in this game whatsoever, you owe it to yourself to pick it up. This is a must buy for franchise fans, horror fans, and VR fans in general. Just do yourself a favor, and don’t play Saints and Sinner right before bed. Trust me. It’s tough enough to shake zombie-filled New Orleans in the light of day. You don’t want The Walking Dead: Saints and Sinners in your dreams.

The Walking Dead: Saints and Sinners is out now on PSVR.

The Walking Dead: Saints and Sinners’ production values and atmosphere outweigh by far any videogame tropes and flaws that might weigh down the experience. This is a tough (and very scary) game, and every system in the game is built to support the idea that you are lone wolf in a very hostile world. Saints and Sinners understands its franchise, and is the scariest The Walking Dead has ever been.