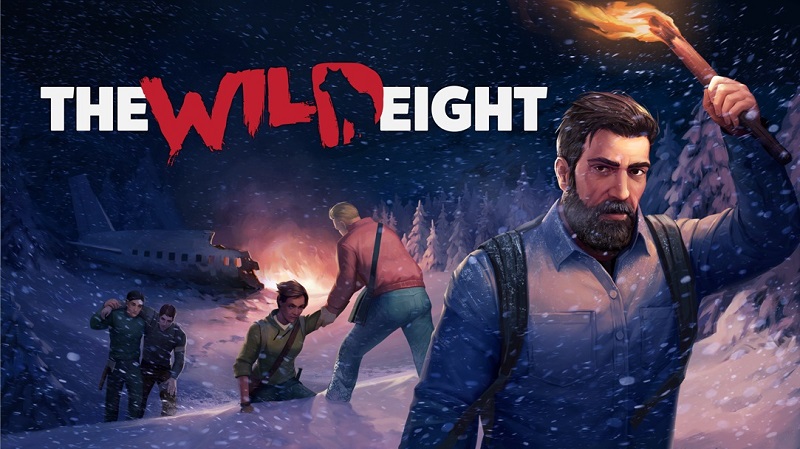 The Wild Eight PS4 Review. It’s somewhat fitting that as we approach the depths of these frosty winter months that The Wild Eight, a game about surviving in the Alaskan tundra, has come along when it has. Though it’s certainly not unique in its setting and broad survival mechanics (hello there The Long Dark), it still nonetheless does a commendable job of reframing the wilderness survivalist adventure in a different sort of presentation.

As one of (yep, you guessed it) eight survivors of a plane crash in northernmost Alaska your goals are twofold. First, you must survive by scavenging what you can from the plane wreckage before becoming wholly dependent on what you can find in the wilderness and then second, you need to discover the cause of the plane crash and whether or not something in the Alaskan wilds could be involved.

Viewed from the sort of top-down perspective you might expect to see in a game like Diablo, The Wild Eight eschews the seemingly trendy first person perspective that other similar efforts, such as The Long Dark, employ. In practice this makes The Wild Eight feel a little more arcade-like and a touch more accessible as a result, simply because you don’t need to contend with things in a three dimensional space.

Before you get started though, The Wild Eight requires that players choose from one of its number. More than just a cosmetic choice, each of the titular eight protagonists each has their own strengths, weaknesses and suitability for beginner and expert players alike.

William for example, takes longer to succumb to the frigid temperatures of the Alaskan tundra and boasts a higher defence than other characters, making him a perfect choice for newcomers, whereas Oliver has no such bonuses but can build structures and craft items with fewer materials than the other survivors. Each survivor essentially represents an all-new, completely different way to play the game, providing a substantial incentive to replay The Wild Eight as a result.

Sadly (and this is a big sadly), one of the best aspects of The Wild Eight on PC, namely the multiplayer side of things which allowed you to buddy up with another survivor online, is completely missing from the PlayStation 4 build of the game. This is a big kick between the legs quite honestly, as much of the tension and creative freedom that The Wild Eight boasts is magnified significantly when experienced with a friend. A disappointment for sure and hopefully something that is remedied in a future update.

As it is then and even taking into account the missing multiplayer functionality, The Wild Eight on PS4 still gives a good enough account of itself as a survival sandbox and like many of its genre peers, it rewards players who know how to balance micromanaging their survival with exploring the environment.

Speaking of which, actually surviving in The Wild Eight is no mean feat to say the least. In addition to having to worry about pesky things like hunger, thirst and potentially debilitating injuries that you might accrue along the way, you also have the bone-biting cold of the Alaskan wilderness to contend with too.

The sub-zero temperatures in The Wild Eight are absolutely no joke either. Should you be careless enough to keep yourself warm by kicking off a campfire or finding shelter, you can expect to become a frosty corpse in no time at all. Elsewhere, flash blizzards and intense snowstorms can also prove to be extremely deadly – unfastening even the most rigorous player from their steadfast moorings.

Sure, there seems to be an element of luck to the proceedings but in a way this actually makes The Wild Eight feel more interesting, more spontaneous as it instead forces the player to improvise on the fly – much as they would in real-life versions of the various grim scenarios that the game showcases.

Death can come in other forms too. Aside from getting frosted to death, starving and dying of thirst, you have the various denizens of the Alaskan tundra to deal with too, including ravenous wolves, bears and, well, other things. As such, sprinting away from foes early on is a good idea indeed, though you also have to balance your stamina use as sprinting too much will leave you panting, tired and very dead.

As you might well expect, underpinning all of this is a fairly in-depth crafting system where you can fashion a wide variety of tools, items and structures by gathering items from the environment. Whether that’s punching rocks to gain ore (Chris Redfield would be proud), or simply scavenging leftovers from abandoned huts, camps and the scattered wreckage of the aircraft, there’s no shortage of places to get all the things that you need.

Another thing to worry about too is the idea of durability. From your shoes to the weapons that you make and discover, just about everything in The Wild Eight has a measure of durability that when exhausted will effectively break that piece of equipment and remove it from use. When taken then with every other aspect of The Wild Eight that seeks to murder your poor survivor in earnest, it soon becomes clear that the game is as much a meditation on dramatic micromanagement as it is anything else.

Luckily, you can tip the balance by upgrading your skills and abilities in order to make your character much more effective and running, building, fighting and more. Rather than being upgraded through some rudimentary level upgrade system, the skills and abilities that you can enhance can all be improved by just simply doing whatever it is you want to focus on. Want to improve your gas tank for long distance sprints? Simply run more. It’s a neat system that makes progression easy to grasp and even more satisfying to accomplish.

Beyond just surviving, there is also just the simple joy of exploring the Alaskan wilderness too. Don’t forget, you’re there to not just endure but to also discover the reason why the plane carrying you and the other survivors crashed in the first place – and that pursuit definitely takes The Wild Eight to some unexpected places that I won’t spoil here.

Audiovisually, The Wild Eight is a simplistic if stylish offering. Though its top down perspective means that you don’t have the intricate and intimate details you’d get from a first person view, the deliberate low-poly stylings of The Wild Eight nonetheless create an effort that’s easy on the eyes. Faring better than The Wild Eight’s relatively humble visuals is the melancholic soundtrack which does a grand job of immersing you in the desolation and hopelessness that being stranded in an Alaskan wasteland would naturally bring.

The Wild Eight then is a fine survival jaunt, it’s just a shame, a crying shame that the multiplayer functionality which arguably gave the PC its soul has been so savagely torn out for this PlayStation 4 release of the game.

The Wild Eight is out now on PS4.

The Wild Eight is a fine survival and micromanagement simulator that is ably supported by decent crafting, exploration and a nuanced audiovisual presentation. However, the omission of the online multiplayer functionality which is arguably the cornerstone of the PC version, certainly stings much more than it should.