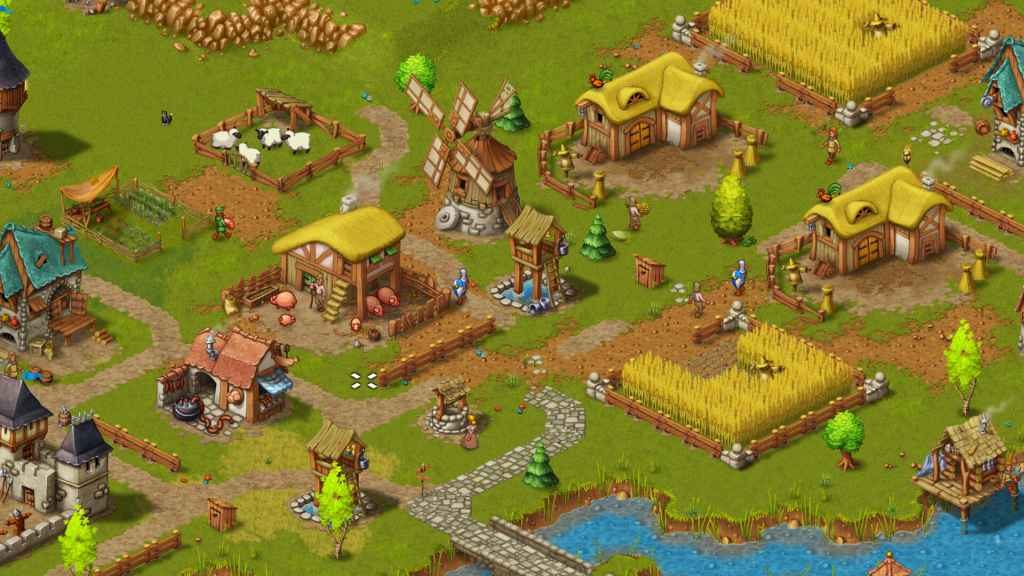 I look at my three-year-old, who is perched on my lap, staring at the television intently.

He nods agreeably. “Tannery,” he almost says, but can’t quite – because he is three.

Townsmen: Bail On The Tutorial As Soon As You Comprehend The Loop

I brought my son in to entertain me on my second evening playing Townsmen – Kingdom Rebuilt, after being almost bored to tears by my first session. The game itself isn’t overly boring one you get going; it is primarily just a cookie-cutter town sim that looks like a souped-up version of a game you might have played on Facebook back in 2007. My primary grievance with Townsmen at that point was that the ponderous tutorial is slow as dirt.

“Where do you want to put the tannery?” I ask my son.

My son hops out of my lap and bounces across the room, pointing out an empty spot on the TV. “Put it in the mud!” It’s how he answers every question of this type. So far, we have put about 30 buildings “in the mud”.

I obligingly knock down a few trees and remove a rock from a corner of our town, creating a nice muddy patch where he pointed. Then I plop the tannery down into the mud and assign a couple of the moody little workers that occupy my town to build it.

I spend the next ten minutes answering questions for my son while the surly builders do their work. Occasionally, the workers turn and shake their fists at us and curse in their little goofball language. They must be out of wood or stone or something. Not to worry, the game will catch up and provide them with some eventually.

“Who is that?” my son asks, pointing at some rando on the street.

I make something up. “That’s the cook. He cooks the deer.”

“Who is that?” he says, pointing at another.

“That’s the garbage man,” I say. “He picks up everyone’s garbage.”

“That’s the video game software engineer. He bores us with timers and meters.”

We continue on in this manner until the meter that is slowly filling up beneath the tannery finishes up, and the little building pops into place.

“Yep,” I say. “The tannery is done. Let’s see what we have to build next. There’s always something.”

The problem with the tutorial in Townsmen is that it is structured as six different “scenarios”. Meaning that the actions you take in one scenario do not carry over to the next. While each scenario teaches you a new skill, there is an awful lot of time wasted rebuilding stuff you already built in the last round. That means a lot of time watching meters slowly fill. My son and I spent hours on end chatting about the various denizens of our little town.

If you play Townsmen, my advice would be to escape the tutorial as soon as you get the gist of what is going on. Don’t spend a bunch of time building up stuff for fun – you will lose it all when the next “scenario” starts.

What Differentiates Townsmen From Other Games?

When I look at a game, I often try to determine what makes it different from other games? What makes it special? What is the “hook” of the game? So far, I’m coming up with a blank on Townsmen. This is not a truly terrible game, but frankly, it feels a lot like a medieval SimTown with early mobile mechanics built in.

The meat of the game is in its 60 or so scenarios, each of which starts you on a different map with various challenges. These scenarios are very diverse, and each offers a number of different goal-based quests. Once I dug into some of these (and washed the foul taste of the tutorial from my mouth), I started enjoying Townsmen a little more. Yes, it is a very familiar-seeming game, but that doesn’t make it unenjoyable. And the “Endless” mode really allowed me to sink my teeth into the game’s systems.

You build houses for your workers to live in. You build logger huts and mines to get them started gathering resources. Then you build refineries and such to process the resources into goods. Then you build a marketplace to sell the goods. You keep adding layer over layer to the production chain, until your sheep’s wool is turned into clothing, and your iron is converted to swords.

There are tons of mechanics laid over the top of this basic “build this, then build that” gameplay loop. Most of them can be solved by simply building more stuff. Buildings need repairing? Build a carpenter’s hut. Warehouse full of resources? Build a marketplace and sell it off. Planning what to build next is fun, but unfortunately all of this building is accompanied by a meter and a wait.

But beyond all of this wretched waiting, there is nothing really wrong with Townsmen (and the game does offer the option to speed things up). You know the drill. Raise taxes if you are low on cash. Sell when the price is high, buy when the price is low. Harvest wheat in the summer, tend sheep in the winter.

The Seaside Empire DLC is included, which transports the entire affair to the shore, allowing players to build ports and stuff. A seasonal weather system has some minor gameplay impact. But none of that stuff changes the fact that players are generally just flipping widgets on menus and then waiting around for stuff to happen.

You have played this game a thousand times. Townsmen is a wedding cover band playing an over-familiar song. You didn’t really want to hear it, but when they sing “Play That Funky Music”, you get up and dance, you know?

And yet, fun does happen. When your town hits a certain size, and you are managing a ton of needs, you can squint and forget that you are playing a blown-out iPad game. Townsmen, at its core, a cute adaptation of a well-worn genre. I would almost recommend it if it weren’t for the price.

Thirty Bucks? Are You Out Of Your Mind?

I normally don’t comment on game prices. I don’t know how much work it took to develop a game, and I’m certainly not privy to the P&L of Handy Games or their parent company, THQ Nordic. But here are a few facts that might bring some insight into my thoughts on this pricing model:

Is it fair to compare the two games? Well, yeah, I think it is. Both games are town management sims. Both are ports from other systems. They are obviously selling for the same price. But where Frostpunk uses modern visuals and has a unique take on the genre, Townsmen features (admittedly cute) old-school visuals, and lacks any sort of distinctive flair that might set it apart from any number of other titles. I am not kidding when I say that it feels like a PC game from 20 years ago.

I’m not saying that mobile ports are some sort of lesser form of game. I don’t believe that at all. But it must be noted that mobile games are typically far less expensive than their console cousins. In the case of Townsmen, I’ll be damned if you can’t buy the original app with crisp-looking visuals on the Google Play Store for 99 cents.

Certain aspects of Townsmen game reveal its mobile origins. You can’t rotate the map if you want to view things from another angle. The mechanic to place buildings is finicky. There is no direct control over your military in combat scenarios, and you have to struggle to locate where on the map conflicts are taking place. The game stops and loads every time there is a change of season. All of this adds up not to a bad game, but certainly to a budget title.

Townsmen – A Kingdom Rebuilt is a decent enough game. It is not terribly original, but it works the way one would expect it to. If it were selling for ten bucks, I would say that fans of the genre might want to pick it up and give it a spin. But in the end, what this game is does not support the price point that is being asked. And that leaves me wondering if anyone is going to want to pay to rebuild this kingdom.

Townsmen – A Kingdom Rebuilt is available on the PlayStation Store.

Townsmen – A Kingdom Rebuilt is a familiar-feeling town management sim, with some mobile mechanics that hover very close beneath the surface. This game will feel instantly familiar to fans of the genre, with few surprises or innovations. There is some fun to be had for patient players willing to wait for timers to run their course, but the price point is prohibitive. If you are interested in Townsmen, I would advise waiting for a sale.