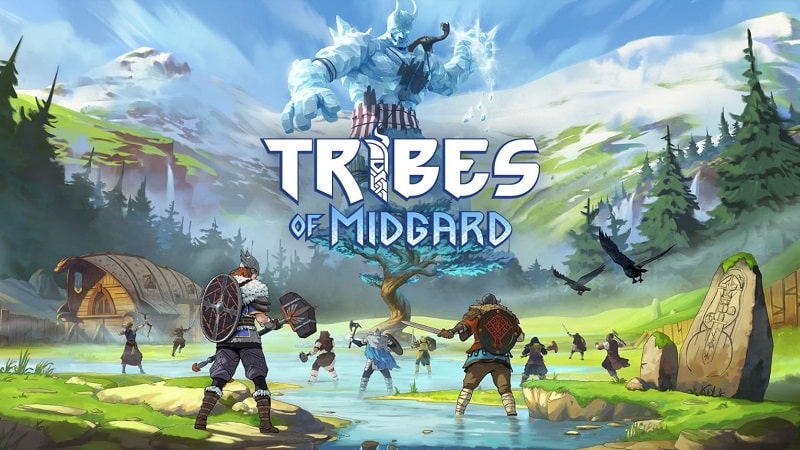 Tribes of Midgard PS5 Review – Tribes of Midgard is a Norse-based adventure survival game developed by Norsfell Games and published by Gearbox Publishing. The game piqued my curiosity after clapping eyes on it during one of Sony’s State of Play event, although the final product would complete subvert my initial expectations and impressions.

When I first starting playing Tribes of Midgard, it was not what I was expecting. I had only seen a few very short videos and snippets on Twitter but it was certainly not the game I suspected. I thought it was more akin to a dungeon crawler, a game closer to a Viking-themed Diablo but by Odin’s beard was I wrong. The combat could be seen to be a bit Diablo-like, but there is so much more to Tribes than that.

Not Your Average Multiplayer Affair 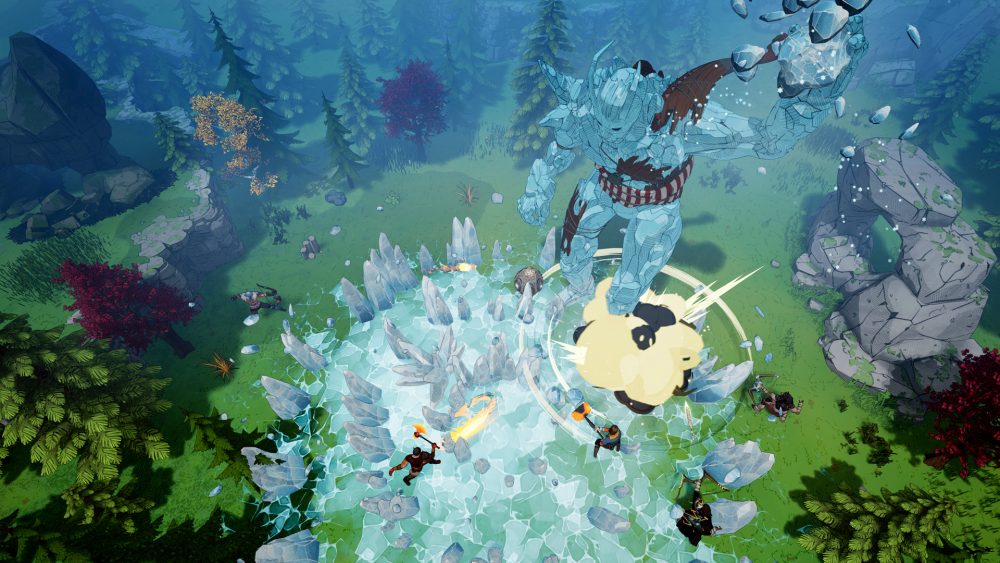 The basic premise is simple. Your village holds one of the seeds of Yggdrasil, the world tree. These seeds and the power they hold are the only things stopping evil Gods and creatures from attacking other realms and bringing about Ragnarok and certain destruction. It’s up to you and your long-haired, axe-wielding buddies to keep the darkness at bay, create awesome gear and upgrade your village to push back the inevitable evil.

Definitely Not A Single-Player Game

When you jump into Saga mode, which is Tribes’ main offering, you share a server with other players. While it’s possible to play the game solo, I personally found this to be a little drab; after all, Tribes of Midgard is an online multiplayer affair, and should be played as such. Each game you join had a randomly generated map, with biomes, quests, resources and enemies. Everyone works together to keep your seed of Yggdrasil alive as long as possible. It’s a strange mix of genres, but on the whole, it works. 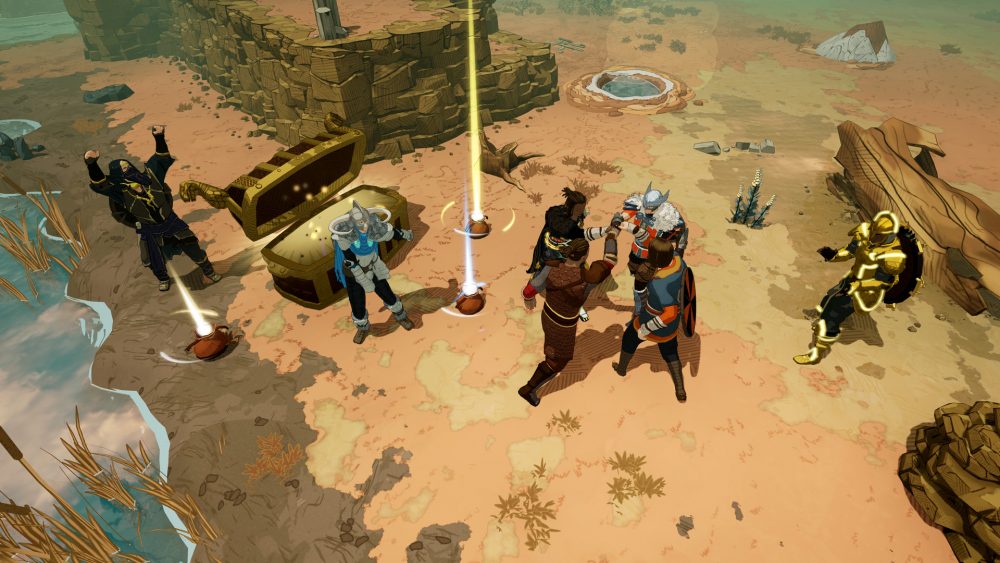 On the outside of this main mode, you have a survival mode and a Fortnite-like progression system. Every time you finish a game you get experience points, which of course leads to prizes. You progress through a Battle Pass-like track, unlocking new recipes, cosmetics, currencies and even pets. There is also a store where you can purchase things with real money — a sad consequence of free-to-play games like Fortnight — but luckily it can easily be ignored.

Tribes of Midgard is an amalgamation of genres. On one hand, you have a survival, resource gathering-type game akin to an MMO. On the other, you have a wave-based, boss battler where ten players stand whacking the crap out of Viking-based monsters and Jotuns. By day you are a gatherer and crafter, upgrading and building your camp and equipment. By night you must defend one of the seeds of Yggdrasil from incomoing waves of witches, monsters and weirdlings.

A seed of Yggdrasil, or the world tree if you will, sits in the centre of your village and its power draws the attention of various beasties. Everything you do from chopping trees to jabbing an axe into an enemies head creates souls. Yep, souls once again rear their head. Anyway, these souls can be used for upgrading vendors and repairing equipment but more often than not they are fed to your seed of Yddrassil and act as its health pool. Once its health is gone, the game is over. 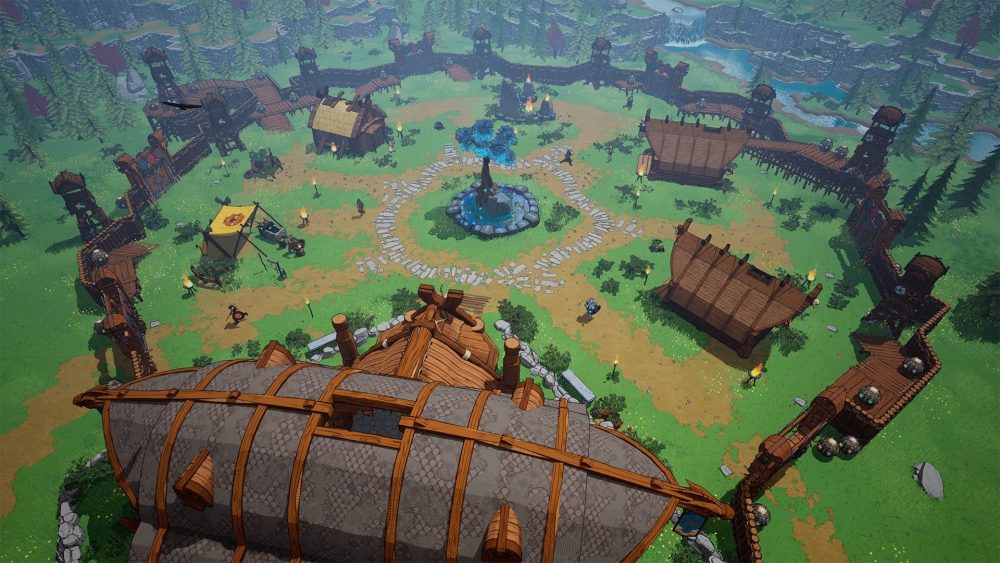 Upgrading your NPCs will lead to better recipe access. Of course, you will need to find the items required but during the day I found the gameplay loop rather warm and rewarding. Venture out, kill some minor enemies, return to town and upgrade your gear. Then venture a bit further, rinse and repeat. The biomes are split and tell you what your level should be when you enter, so you know where you should and should not be.

This, however, did not stop me from being cheeky and trying to run in high-level areas and steal some sparkly rewards. Luckily, everyone I played with seemed to work together invitingly, reviving you when required and generally being pleasurable to quest with. I also liked the communal chest, which everyone can access and meant If I joined a game in progress I could look in there and get a leg up on my armour and weapon crafting.

Skills To Pay The Bills

Tribes also has a fun character class and progression system where you can assign points to upgrade your characters skills. You only start with two classes, the ranger and warrior with more being unlockable. There are also runes to find, rare weapons to craft and loot to hoover up. Every game I was part of, I usually found something new and different, and because every game was procedural, it always managed to stay quite fresh. 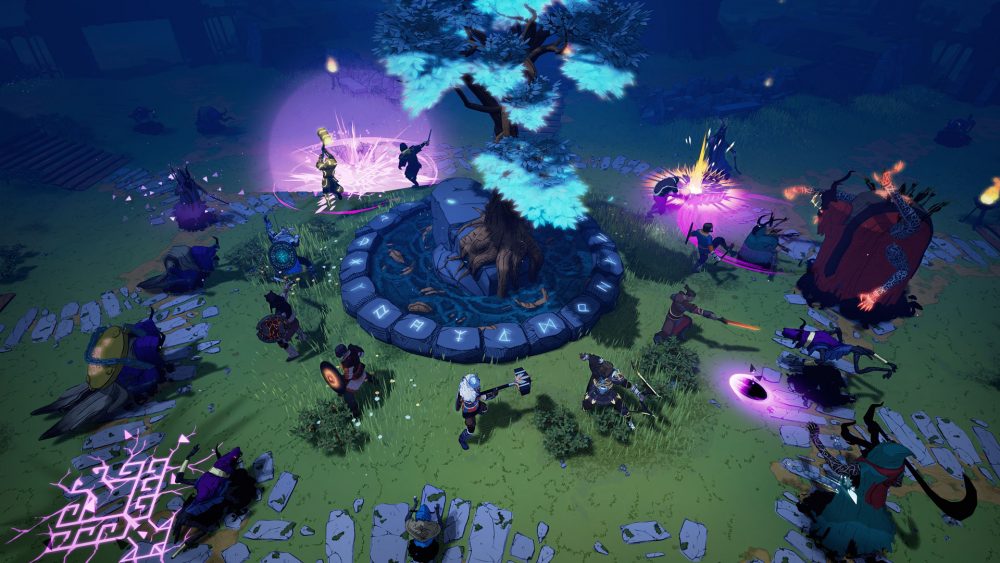 Tribes also had a great save system too. Even though you are in a ‘live’ game you can back out at any point and re-join at a later time. If the game has already finished you will even get your rewards and progress up your Viking Battle Pass a little. This means you are under no pressure to stay longer than you want and never feel you were losing out on vital rewards.

One feature that I really want to heap praise on is that your PlayStation Trophies are tracked in-game and also lead to in-game rewards. Not since Final Fantasy XIII have I seen such a great in-game reward system tied to your Trophy progress. Every time I unlocked a Trophy it was brilliant to see what trinket, tool or cosmetic you unlocked. It made hunting down those elusive virtual baubles more worthwhile.

Technically Tribes performed, on the whole, very well. The load times were great and the game ran smoothly most of the time. I did have the odd frame rate hitch here and there, but with an online game with ten players I put that down to poor Internet connections. Pleasingly, I didn’t encounter any bugs or crashes at all, overall making for a smother experience despite the minor niggles described above 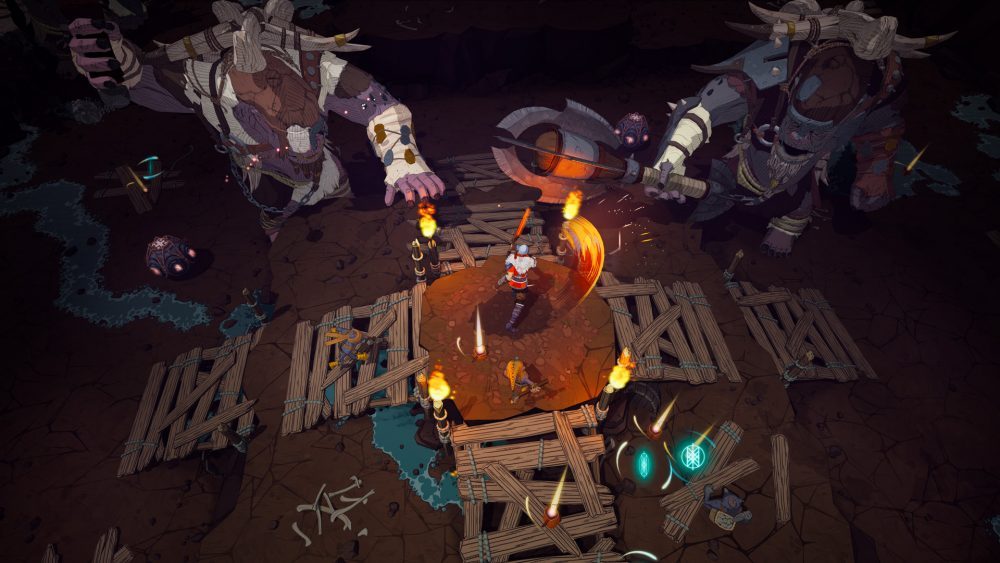 Having said that, I did have to dial back the haptics on my DualSense controller after a few hours. Every step my adventurer took I got quite a large vibration on my controller. It was fine to start with but eventually started to annoy me, so a quick trip to the options screen remedied that particular issue. I would have liked a slider to increase or decrease the severity of the haptics but turning it off did the job all the same.

On the visual side of things, while Tribes of Midgard is not the best-looking game I have ever seen, I thought it did a great job of grounding me in this Norse world of Viking Mythology. The basic aesthetic is very crisp and colorful, while the enemies and world are extremely well designed and visually appealing. Everything looks and feels like it belongs on a longship and that is definitely something the developers should be applauded for.

On the sound front, again, while not being fantastic, the score and sound design did an adequate job of keeping me invested in what I was doing. While the soundtrack is unlikely to stick with me for long, it did fit the game and the visual style that accompanied it. The sights and sounds of Tribes both help you sink into this multiplayer crafting, slaying simulator, and that’s really all you can ask for.

Fun And Frolics With Friends

Tribes of Midgard is fundamentally a very enjoyable romp.. It’s not revolutionary in any way but what it does it does very well. Its eclectic mix of genres is fresh, its multiplayer systems work well and its presentation, on the whole, is very detailed. I really enjoyed the two different flavours of the game, gathering and crafting by day and defending by night. It gives the proceedings a nice flow and always means you have something to do.

I cannot think of many games that feel the way Tribes does as it throws a Viking blanket widely over a few genres, but if you like survival, crafting, combat and multiplayer games, then Tribes is well worth your money, especially if you find a few fun Vikings to quest and drink mead with. Hurrah!

Tribes of Midgard is available on PS5 now.

An enjoyable blend of genres and gameplay systems gives Tribes of Midgard a unique feel. While not being revolutionary, it manages to create a pleasant online experience rarely seen on a PlayStation platform. It looks clean, feels fresh and has enough content to keep you going for a long time. While I am not a massive fan of the Fortnite-style progression system, I loved the rewards tied to your Trophies. Tribes of Midgard is great, especially if you have friends to quest with.