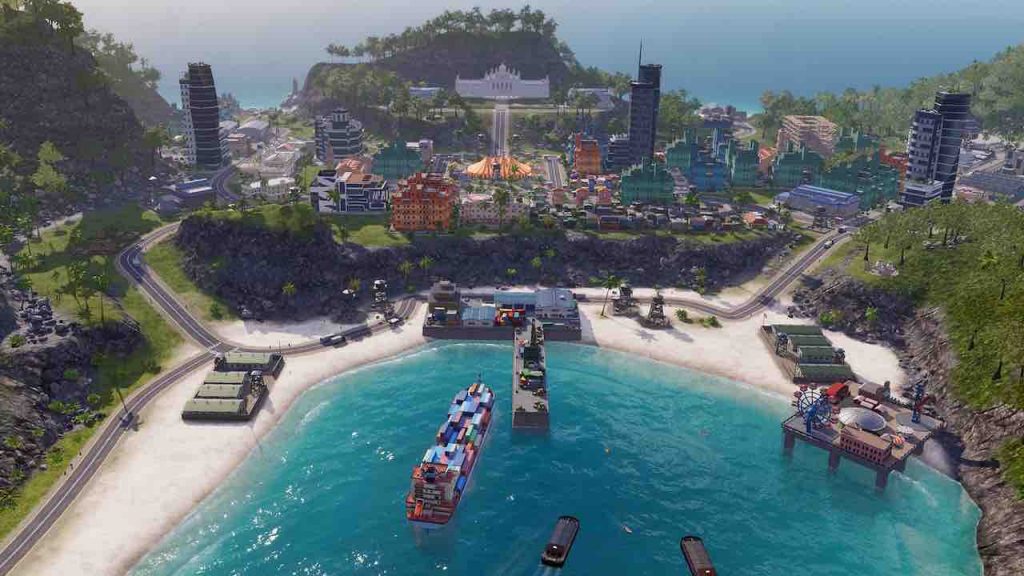 Getting six titles deep into a series means you should be freshening up the formula, maybe even rebooting it to some degree, but with that comes the fear of alienating your established fanbase, and having no guarantee a new audience will embrace it. So it’s not uncommon to see remixes and greatest hits packages as sequels. Such is the case with dictatorship-based city building sim Tropico 6.

A Satirical Strategy Effort With A Deliciously Dark Streak

The franchise has an appealing core concept in becoming El Presidente, the dictator of the island nation of Tropico, and building it up from nothing, to becoming a powerful force in the wider world. It’s Cities Skylines for arseholes. Limbic Entertainment has taken the reins for this latest version, and with that knowledge, you can see why it didn’t want to rock the boat too much. So we still get Tropico as it has been for the last couple of entries, but with a few new shiny buttons to test the waters.

From the kickoff you get to create your own El Presidente, a limited option, but a fun introduction that allows you to be a ruthless pipe-smoking bastard in a floral shirt and a bucket hat if you so wish. Also new is having multiple islands, so there’s less stressing over space as your kingdom of dickery grows. Those in need of a refresh or indeed those fresh to Tropico can run through a tutorial version of the game to learn the dictatorship ropes. It’s pretty thorough, which is great for newcomers, but perhaps a bit much for just a quick recap.

The meat of Tropico 6 comes from two modes. Its Campaign mode, which tells the evolving story of El Presidente and their right hand man as the years roll by, pitting you against various challenges as you go. The other is the more freeform sandbox mode, which lets you play it out in a more traditional sim method.

In both cases, your main objective is to keep yourself in power by any means necessary (a sadly familiar concept for many). This requires a balance of fear-mongering, corruption, and bullying. Rig elections, kill dissenters, play off Axis and Allied countries against each other, and generally make yourself seem irreplaceable.

It would be a grim idea for a game if it wasn’t so adept at being lovably daft about it. Tropico’s strength as a sim has long been its tongue-in-cheek approach to a sinister subject, and Tropico 6, despite being in the hands of a new studio, still retains that. The relationship between El Presidente and his second in command is goofy and bizarrely sweet at times, and the ability to make a strange vacation paradise/hellhole out of Tropico is darkly funny. You can even do something as ludicrous as steal famous landmarks from other countries (pulling that off is giddy fun).

Keeping the people happy/under your thumb is key to staying in power, and you can do this buy utilizing them well to build your humble island into a world power. It’s up to you to decide how cruelly you treat them, but it’s important to throw kindness in there as well. So building bars and fairgrounds to go alongside farms and factories can go a long way to keeping them from overthrowing you.

You also have to keep the peace between Tropico’s factions. From Communists to religious groups, there’s always someone in your ear about the others. They’ll often ask ultimatums of you that may displease other sides, so it’s up to you to decide how to handle that. Ultimately, it’s about self-preservation above all.

To that end, El Presidente can get a bit more hands on by putting in an appearance around town to pep up the locals, and also give rousing speeches (that you get to Frankenstein together) to help sway opinion. As you get towards an election, you can see the percentage of the population who are happy with you, and while rather vague as Tropico grows, it can help guide your hand towards the right course of action. You can amass personal wealth by drawing it off the country’s profits and storing it in a Swiss Bank Account, which helps grease the palms of the various faction leaders when their combined ultimatums prove too much to handle.

Being a bastard is the fun part of Tropico, but it’s always been a really hard thing to maintain. That’s still true for Tropico 6, and that’s a bit of a shame because you should be able to go full bastard and not get punished as severely as you do. Yes, it makes sense that you should get your comeuppance eventually, but just a bit more leeway would add to the escapism.

Underneath that satire and the silliness, Tropico 6 is a finely-detailed sim. You can focus on individual citizens, set trade routes, sort arrangements with foreign countries, and tweak almost every aspect of your country. With the extra space afforded by the addition of more islands, that can make it a bit tougher to keep a lid on things, but if anything, it makes it more engrossing than ever, as you can better manage your industry, commercial, and entertainment in league with your population’s housing now you aren’t stressing for room.

There’s not all that much that’s genuinely new and exciting about Tropico 6, but edges have been smoothed and surfaces’ polished to make perhaps the most refined version of the sim to date. Sometimes, innovation isn’t necessary.

Tropico 6 is the city-builder series as satirical and silly as it’s always been, but with a few new bells and whistles that improve the solid winning formula. It’s a sideways step in many ways, but it’s still a pretty confident one from the series’ new developer.