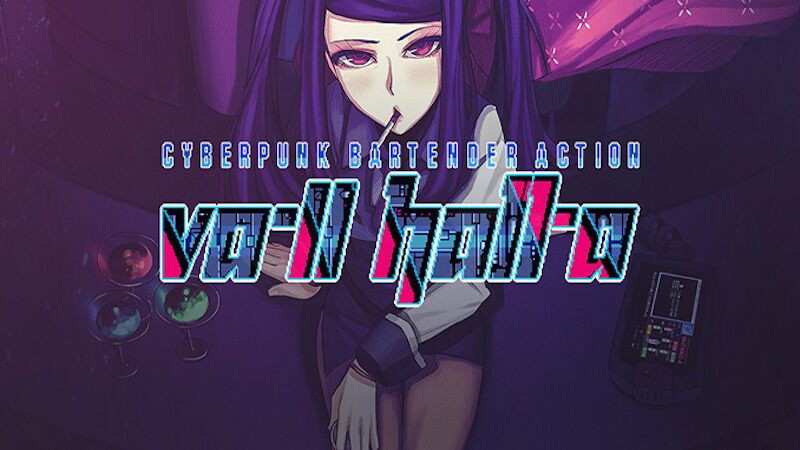 Va-11 Hall-A: Cyberpunk Bartender Action is one of those games that sideswiped me in the best way. I first got my hands on it last year for my Vita, thinking it would be a fun romp to get an easy Platinum. Instead, I met something that challenged my perception of science fiction.

I so deeply regret that I missed out on the Limited Run Games release of Va-11 Hall-A. So, when the announcement arrived that Va-11 Hall-A is finally coming to PS4, I knew what I would be doing when it landed.

Glitch City is the world you live in during the vague decade of 207X. Pure humans are a rarity as augmentations are as common as owning a cell phone now. Rival factions wreak havoc on the streets as crime runs rampant and authorities constantly fight to keep it subdued. Conglomerates dictate how the world runs, Monsanto-style, by delegating every step based on profit margins.

All of this and more are part of the Glitch City, but you never see any of it. All you see is the small, isolated world of the bar, categorized as Va-11 in the Hall-A district; hence, Valhalla. All of this information comes to you through the customers you serve.

You, the main character, are Julianne Stingray, more commonly just called Jill. You became a bartender and have worked in this dive of a bar for a while now, going through the motions. As you play, you meet a diverse clientele that brings the outside world in through their life stories. Some characters are massive jerks, and some are genuine examples of humanity. They all have some sort of association with each other as well. So half the fun is interpreting who did what to whom and when in the grand scheme of things.

The world lives through the characters

Va-11 Hall-A is the best example of character-driven narrative in gaming I’ve experienced in a long time. In games, most of what the game delivers is dependent on how the characters navigate the world, their decisions defining who they are. Here, the characters define the world. Instead of subtext, the narrative is context to the lives lived around Valhalla. Refreshing is a good way to describe my response to this game, even after my second time through it, but that somehow isn’t apt enough.

Character interactions are adult, flawed, hilarious, traumatizing, depressing, melancholic, and even lackadaisical at times. Many characters regularly return to the bar for various reasons, and some only stop by a time or two. There is a large number of characters, which in a text-based experience could be overwhelming to some.

However, the pace Va-11 Hall-A takes is deliberate. It allows you to take in everything one step at a time without being bombarded all at once with newness. Each beat is delivered in stride with enough time to establish that character to the extent needed for their possible return.

Character interactions are intimate and believable. Verisimilitude is a huge aspect of Va-11 Hall-A. It’s something I do not often find in sci-fi media. Call me a curmudgeon who only reads classics, but so much media focuses so much on presenting the world itself that the characters take a back seat. Humanity is the reason we navigate the world, and the same must be in the content we consume. Things like cyberpunk futures look cool, but what is it without humanity? It’s a bunch of random goggles and repurposed old technology. That makes for a good history book. Give it heart, and the rest will fall into place beautifully. Va-11 Hall-A proves that in spades.

As an avid reader, I responded deeply to how this game presents itself. Through and through, Va-11 Hall-A is a retro-stylized visual novel with elements of mixing drinks as the only breaks in the delivery.

Mixing drinks can be fun

Mixing drinks is simple. The D-Pad allows you to navigate the drink recipes, and the Left Joystick combined with the Cross Button lets you input ingredients to mix drinks. Menu layout here is simplistic. There is a lot of information on-screen, but all of it is categorized conveniently. Cues from the customer allow you to search for vague drinks they want, and inputting them is simple and clean. The only stumble I had on this front came with actually mixing the drinks with R2. If I tried to click through these too quickly, the cursor would move between the Mix button on the right of the screen and the recipe book on the left. So, I had to slow down, and it worked just fine.

While this is an easy hurtle to overcome, the limited amount of gameplay in Va-11 Hall-A begins to exponentiate even the smallest of issues with it. The point is to break up the dialogue, which it does nicely on its own. At the same time, not being able to mix drinks at your own pace adds subtle distraction from time to time.

Your ability to remember drinks is a factor to this side of the game as well. If Jill is level-headed, she repeats the order to herself, making it easier for you to find it and mix it. If she’s distracted by something, it’s up to you to remember. How you play the game affects Jill’s ability to do her job. If you’re careful, you’re fine. If you’re clumsy, you’ll struggle.

This game also consists of a lot of reading. Even as an avid reader, I found myself bogged down for an in-game day or so in the middle as backstories began to fill in some of the smaller gaps. Days in-game only take maybe ten to fifteen minutes each to read through, though. Then again, I’ve played this game before. So, with this in mind, Va-11 Hall-A may not be for everyone.

Nonetheless, the quality of writing here is what makes even the uninteresting parts worth consumption. Quirky jokes return. Questions aren’t always answered completely. Not all interactions find resolution. But that’s life. It’s how Jill navigates these interactions and setbacks that gives weight to the narrative.

This has been heavy conversation about writing techniques, but this is a visual novel after all. I’m not one to jump into a visual novel, but I cannot say how glad I dove into Va-11 Hall-A. I went in, looking for a Platinum, and I came out contemplating my own circumstances. That’s quality media. Stories communicate to the consumer. They’re not just entertainment. They’re extensions of self. Va-11 Hall-A has a ton of heart. It has a few shortcomings, and it may not be for everyone, but Va-11 Hall-A is one of those “I don’t play games like this” games that will surprise you. Good is good, even if it’s not normally in your wheelhouse.

Va-11 Hall-A is one of those games that comes out of nowhere and blindsides you with what it has to say. It beats the hearts and minds of the creators in special ways all while delivering a wonderful stylized world through its unique list of characters. Despite its few shortcomings and hefty reading, Va-11 Hall-A offers up something all its own rarely found in this industry.