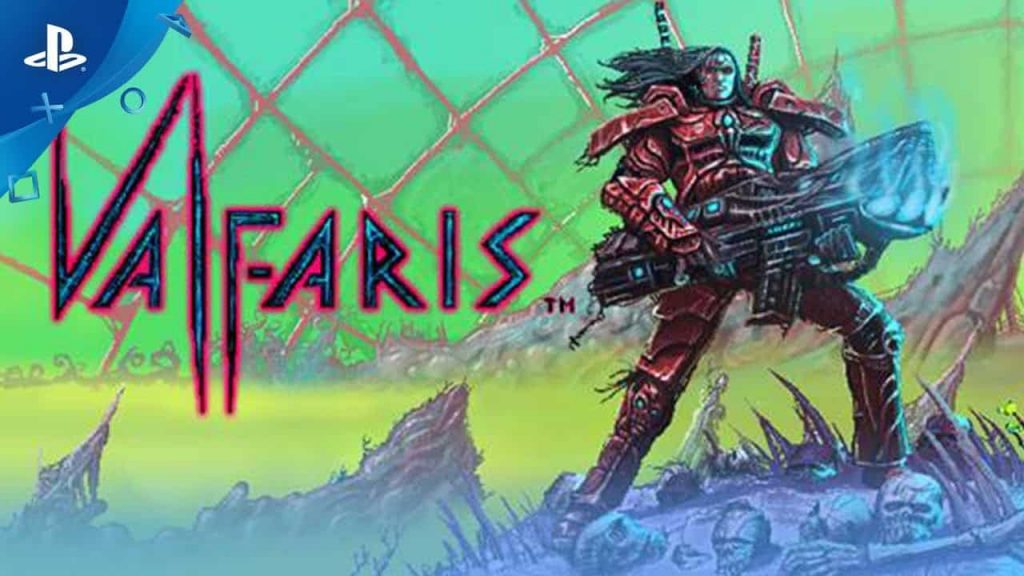 Valfaris is a heavy metal infused side-scrolling shooter whereupon every time a new piece of gear is looted, the protagonist does a furious headbang, before leaping off onto the next platform and laying waste to his enemies, generously covering the game’s battlefield hellscape in a buffet of blood, guts and metal. Forget Konami’s decidedly limp attempt at resurrecting Contra as a 3D shooter, because Valfaris is a far more effective homage to those long forgotten classic titles than the Japanese publisher will ever seemingly be able to manage.

Look, Valfaris feels like DOOM, Mastodon, Turrican and Contra all had a pain baby and it’s basically great.

Strongly influenced by the likes of Contra and oft-forgotten 16-bit genre classic Turrican, and developed by the same folk who brought us the underrated Slain: Back from Hell, Valfaris casts players as a crusading intergalactic warrior who must storm the titular fortress of Valfaris and eradicate the darkness that lay within. It’s the perfect, wafer-thin narrative setup for Valfaris’ resoundingly great platforming shooter beats to say the least.

Harking back to the template of old, Valfaris has you charging through a variety of side-scrolling levels and absolutely ruining everything in sight with whatever weapon comes to hand. With his arsenal effectively split into three categories, our hero has primary and secondary weapons, in addition to a slot for a melee armament, too. Even though the main weapon can be fired consistently and requires no ammo, the secondary weapon feeds off an energy reserve which also just happens to power a handy directional shield too, which if timed correctly, can send projectiles back to their sender with predictably violent results.

Luckily, while strategy is encouraged to maintain your energy levels, the substance can be harvested from fallen foes, while loot caches (which are naturally made of piles of sticky gore skulls), can also yield energy, health and even sometimes materials that can be used to upgrade the numerous weapons that you collect throughout the game. Speaking of which, the numerous weapons that you’ll get to handle in Valfaris are highly satisfying to use, and each come with their own strengths, weaknesses and, of course, supremely metal names.

From the abruptly monikered ‘Bastard’, a hefty broadsword that can cut your enemies into bloody slices, to the ‘Envoy of Destruction’, a hulking rapid-fire cannon that shoots out homing rockets and many, many other weapons besides, Valfaris is certainly not lacking for inspiration or giddy murder happiness on the premium bang-bang front.

If the wild imagination of developer Steel Mantis is clearly on rude display with the weapons in Valfaris, than so too is such naked creativity glimpsed in the enemies and the world at large as well. Encompassing massive, tentacle drones that lurch across the screen, to dive-bombing bionic insects, what appears to be massive, augmented fleas with rail cannons where the tops of their heads should be and screen-filling bosses of a sweep and scale that haven’t really been since in an age, Valfaris has style in spades that bleeds through every filthy, blood-stained and augmented metal pore.

Betwixt the gorgeously handcrafted pixel art from Andrew Gilmour and the constant, agency-infusing thrum of Valfaris’ extreme metal soundtrack brought to us by Celtic Frost guitarist Curt Victor Bryant, the game begins to resemble something of id Software’s contemporary take on Doom, whereupon that visceral combination of audio and visuals come together to provide a rare sort of adrenaline to the player. This is the good stuff, in short, and certainly you know this game isn’t messing about when it offers up numerous CRT filters for old bastards like me to tinker around with.

Get Ready To Rip The Galaxy A New Wormhole

As much as Valfaris would seem to walk the traditional genre path, it does so whilst also bringing a small handful of innovations to the table. One such innovation are the Resurrection Idols that are dotted around each map. When collected players can elect to spend them in order to trigger key checkpoints, or store them up to increase their maximum health and energy reserves – the obvious drawback to that being that if you die your return to checkpoint land will be… extended to say the least.

Then there’s the meat and potatoes of the action in Valfaris itself. With no roll or evasion command present, you must leap, duck, shield and shoot your way through the legions of meaty metal monsters that come charging your way, while later on in the game things become much more varied as you ride massive metal blood worms (yes, everything is metal and bleeding in this game, in case you hadn’t realised), and piloting massive, endlessly devastating stompy mechs with massive skull motifs (and of course, skulls, too).

Don’t get it twisted either – Valfaris is decidedly not a Metroidvania or a roguelike title. It is through every pixel of its design DNA, a side-scrolling arcade shooter that places a premium on player skill and incremental weapon and item upgrades, and based on that fact alone comes across as far more refreshing than other side-scrollers that might appear to play similarly.

Ultimately, Valfaris is that rare sort of effort which plays as good as it looks and sounds. Though a little extra content would have been welcome, the fact remains that Valfaris is a potently glorious marriage of Doom and Contra with the sort of verve and flair that modern day Konami wouldn’t dare employ. Side-scrolling shooter fans, your savior has arrived.

Valfaris releases for PS4 on November 5, 2019 and Xbox One on November 15, 2019. It has already been released on PC and Nintendo Switch platforms.

A heavy metal steeped side-scrolling blaster that is awash in blood, gore and super solid platforming shooter beats, Valfaris is essential for anyone looking for a challenging affair that does ample justice to Konami's poorly treated Contra franchise.