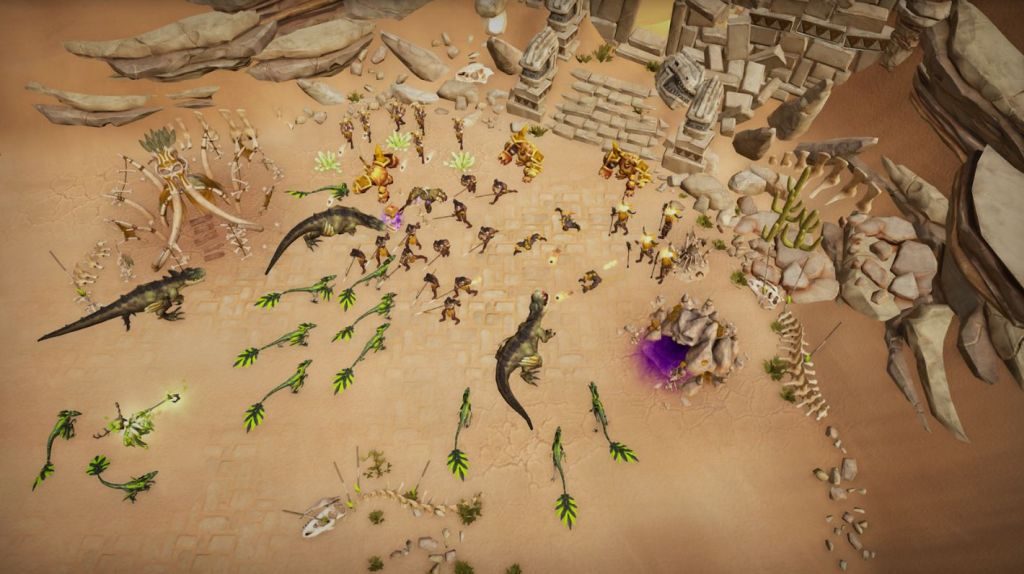 Warparty is a fun old-school RTS, much in the style of Warcraft or Age of Empires, releasing on PS4 after a six month stint on Steam Early Access. Warparty is one of the few real time strategy titles that makes the transition to consoles with a decent control scheme intact, but unfortunately, it also arrives with a rather sizable chunk of the game missing in action.

Warparty’s Gameplay Will Be Recognizable To RTS Fans

Any fan of RTS games ought to be able to grab a controller and jump into Warparty fairly easily. Players typically start each match with a hero character and a couple of workers. The hero is basically a military unit with a ton of hit points. Workers can harvest resources and build new buildings. This is all RTS 101-type stuff here.

There are two primary resources in Warparty, food and crystals. In the early game, putting your workers to work harvesting local resource deposits can keep you solvent for a bit, but you will quickly want to start plunking down farms. Resource deposits will eventually run out, but farms produce food infinitely, so they are definitely preferable as soon as you can afford them.

There are a number of other buildings that you will want to produce as quickly as possible; houses will allow your population to swell, various training buildings will produce a variety of military units, research buildings will allow you to upgrade your army’s offensive and defensive capabilities. There is also a building that allows you to convert food to crystals (something I wish I had figured out quicker) – essentially allowing for infinite production of both resources.

Expansion and quick development is the name of the game. You will want to start cranking out buildings and units as fast as possible, because no one in Warparty is resting on their laurels.

The player also has access to some special powers that can be activated on demand, provided that you have enough power built up to use them. Power is gained through the construction of certain structures, or by capturing and holding certain points on the map. I often found this a bit of an afterthought, though when I did remember to use them, I found the powers to be quite…powerful. But with so much to juggle, the fact that I had access to these powers kept slipping my mind.

Like The Flintstones – If They Were All Obsessed With Murder

Developers Warcave and Crazy Monkey Studios have clearly spent a bunch of time and effort developing a fun world for strategy fans to play in. The harsh wastelands that make up Warparty’s many maps are populated by an mixture of warlike tribes people and savagely dangerous dinosaurs. I would say that they live in harmony, but they actually seem to be pretty excited about ripping each other’s guts out. Regardless of the mode you decide to play in, you have the option to pick one of three unique and interesting factions.

The Wildlanders are your baseline tribe, proud and free, and determined to remain that way. The ruthless Vithara focus primarily on dino-based combat units, and are merciless in battle. My favorites (and the faction that dominated most of my playtime) are the undead Necromas, obsessed with bringing death and decay to the world.

Each of these factions have their own unique buildings and resources, though after a bit of play it becomes apparent that the factions all parallel each other, more or less. For each giant Gollum the Necromas can create, there is an equally powerful dinosaur the Vithara can create to counter it.

The real line of differentiation comes from the minimal but effective skill tree each faction has at its disposal. At the beginning of each match, players can choose one of two offered skills to enhance their tribe. As the Necromas, for example, I usually chose to go with a zombie build, which caused an army of zombies to slowly appear around my hero character. Can’t argue with free units.

As each battle progresses, you get the opportunity to level up your home base twice, each time picking one more skill to enhance your team (in my case – increasing the number and strength of my zombies). When you do the math, there are a lot of different build options that each faction could take, allowing for a variety of strategies for the thoughtful player.

You will need all of those skills and strategies, because Warparty wastes no time whooping your butt. The default difficulty is brutally difficult – the first few times I played, the opposing faction came sweeping through my base with full armies while I was still trying to figure out where to put my farms.

There is no time to be wasted in Warparty. You need to start making moves, and never stop. I am a more casual player that enjoys setting up my resource gathering and then letting my cash build up while I carefully consider what buildings I want to make next. My natural approach is a recipe for disaster. To be successful, you need to crank on this game, expanding and building without pause.

Luckily, there are “Easy” and “Very Easy” difficulty modes that allow new players to get to know the game in a more casual way. My advice would be to slide that difficulty all the way down to “Very Easy”, and then play a few rounds of Survival Mode with the various factions until you figure out your preferences. You will have to fight off waves of attackers, but they aren’t anything noobs can’t handle. This will allow you plenty of time to explore all of the options available without the constant threat of annihilation.

A Variety Of Modes – With One Glaring Omission

There are a number of different modes for players to enjoy in Warparty.

The above-mentioned Survival Mode places the player in the middle of a giant reserve of resources, and tasks them with surviving as long as they can against wave after wave of increasingly difficult opponents. There are a number of chokepoints to secure, and before long you will find yourself cranking out units and dispatching them all over the place to beat back incursions. This is a fun mode, and as I mentioned, a great way to learn the game’s systems.

Skirmish Mode places players in a one-time battle against opponents with a wide variety of parameters that can be adjusted. Players can choose the map, the number of opponents, the difficulty, any number of options.

Each faction also has their own unique Campaign, with original lightly animated cutscenes that connect maybe seven or so missions. Like the rest of the game, don’t expect the campaign to take it easy on you. After the first mission gets you acclimated to the controls (kinda), Warparty brings the pain. Like most of the rest of the game, I had to dial back the difficulty in order to progress until I was able to bring myself into line with the speed of the game’s AI opponents.

All of this is well and good. I was rather enjoying Warparty despite its scathing need to rub a potato peeler on my face whenever I tried to play on Normal difficulty. I was considering buying an extra copy for my kid so we could while away Sunday afternoons marching dino-armies into each other’s camps whilst making wild accusations of cheating.

That is, until I realized that there is no multiplayer option in Warparty. For whatever reasons (I’m gonna go out on a limb here and guess that the reasons are time and budget), the PS4 version of Warparty doesn’t include either local or online multiplayer.

Important note: The part of the above trailer that mentions multiplayer and leaderboards? Yeah, we don’t get that.

This lack of multiplayer isn’t a deal-breaker (Warparty is still a fun game), but it is somewhat disappointing. For me, RTS games are most fun when I can hear the real-life shrieks of my conquered children. I like to let ‘em build up a nice little society before crashing in there and burning it to the ground. But I digress.

Even without a multiplayer component, Warparty is a fun budget RTS title that will deliver hours of fast-paced strategy to fans. The multiple factions allow for a variety of strategies and playstyles for players that are willing to dig in and learn the intricacies of the title.

With plenty of modes, options, and three mildly customizable factions, Warparty offers RTS fans a lot of content to chew on. Much effort was obviously spent building this unique world and its intricate mechanics. While the lack of multiplayer is disappointing, Warparty will keep fans busy with its blistering difficulty and fast-paced strategy action.