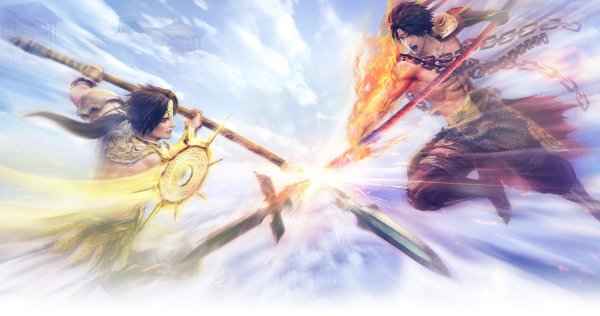 Warriors Orochi is the ever evolving dimensional crossover series of the Dynasty Warriors and Samurai Warriors franchises, and Warriors Orochi 4 is the latest release in Koei Tecmo’s iconic series’ mashup.

This time around, taking up where Warriors Orochi 3 left off, our heroes have returned to their respective times and dimensions after their latest and greatest battle.

Unfortunately their memories were lost in baggage claim during the dimensional trip back, and they have no recollection of the events of the last crossover. Soon after returning to their warmongering ways,they are enveloped in a mist and emerge once again in a strange new land.

We learn quickly that Zeus (yeah, THAT Zeus), for whatever reason, most likely because he’s a god and we all know that gods are dicks that like to mess with mortals, has pulled history’s greatest back through Orochi’s dimensional portal.

Our heroes emerge to scuffle with enemies they have never met, or at least can’t remember meeting, and along the course of the story new factions form, old allies become enemies, and old enemies become frenemies.

The roster is massive, so much so that it broke a Guinness World Record for most playable characters in a hack-and-slash videogame, meaning “yes,” your favorite character is in there.

Gameplay is just like Warriors Orochi 3, in which players take control of 3 characters and switch between them during battle. Each character has a base type; Technique, Power, and Speed; and each type has it’s own perks, playstyle, and drawbacks. The fourth type, Wonder, which was introduced in Warriors Orochi 3 has been removed.

Before each mission, you select your main team of three fighters, four support characters, and a magic horse. This is done from the mission screen where you can customize and upgrade your officers, weapons, and base camp using Gems, Crystals, and Growth Points.

The mission screen, which is where you spend all of your time outside of battle, is super easy to use and navigate. Upgrades are done with a simple to use grid system, managing weapons is done by character, and you can conduct mock battles to see how your new officers measure up. You can even power level officers you don’t use with Growth Points you gain from battle.

My favorite small addition are the new dialogue options you can listen to from the officer menu. Highlighting your officers will sometimes display an event option in which you can listen to your officers interact, usually after you have new allies join your party. The cutscene is just character portraits and text, but the voice work is top notch as always and nearly every conversation is a treat to listen to between battles.

Once you’re happy with your setup, diving back into battle is the same as it ever was, but a little more fast paced and fun (okay, a lot).

Just like before, dash into a crowd and start murdering. It’s never been more fun to be a mortal with god-like powers and send dozens of enemy soldiers flying. Square sets up your normal attacks for triangle finishers, and if you get in a pinch, just use your Musou attack with circle. It’s a formula we know well, and one that’s easy for newcomers to the series to pick up, but this time there’s a bit more meat on the bone.

The controls and frame rate feel as smooth as ever, though the camera getting wonky next to walls, a problem that has pervaded the series (especially if lock-on is engaged), has never really gone away.

I honestly can’t tell if I’m just used to it at this point, or if developers globally are fixing it year by year, bit by bit. Either way, it’s still a problem getting into a corner and being helpless to attacks from behind, so turn around and start swinging blindly like always.

Making its godly debut, Magic is a brand new type of combat to the series. Once it is acquired, each character can use a specific type of magic by holding R1 and pressing either square, triangle, or circle. These attacks can have various effects on enemies, and once certain conditions are met you can use a Unity Magic attack to cataclysmic effect, in which your four support characters and three main fighters combine their magic to lay waste to everyone in the area (so satisfying).

On the surface it may seem like an unnecessary addition, since it essentially acts as another combat system on top of two or three others. However, this is where the most insane fun really begins. Warriors Orochi 4 is all about building that combo meter, and magic, when properly used, becomes a new and super effective tool.

Combining the standard combat, character switching system, and new magic system creates a staggering amount of variety and ways to build combos with the right team put together; and with a little bit of practice and timing, can allow for some of the most insane combo chains you’ve ever pulled off in the entirety of Koei Tecmo’s hack n’ slash genre-defining games.

Getting higher and higher combos is essential for some tasks, such as making sure you are above 300 hits before destroying a special enemy type, the Chaos Origin, in order to make it drop a Tear of the Gods. This is where the Rage mode makes its return, and having a high combo meter will allow you to use this item in the pitch of battle to engage a True Rage Attack and devastate your foes.

It’s combo system after combo system, one on top of the other, and every finishing blow ends in spectacular form, and with so many characters to master and special attacks to see, the replay value is nearly limitless and remains enjoyable throughout.

Warriors Orochi 4 and the Magic Horse

Though good team balance becomes essential later in the game and on higher difficulties, for the most part you will still blaze through the battlefield like always and eliminate enemy officers, one after the other, running around the map aimlessly or lost, and oftentimes find yourself backtracking or being forced to rush somewhere.

Thankfully, there was an unexpected saving grace; your magic horse.

Being able to magically call your noble steed out of a horse dimension right under your crotch is the handiest it’s ever been, and now I never want to sprint again, in any game, ever.

There are many more things to discuss that have been added to the game, but I encourage you to find out for yourself. Any fan of Koei Tecmo will find this entry enjoyable, even if recent entries were found lacking for some.

Overall the series has never had a better entry, and is the best Warriors Orochi to date. For me personally, this is the best entry in the entire genre since Dynasty Warriors 3.

Oh and one last cool thing, if you have save data for Warriors Orochi 3 or Warriors Orochi 3 Ultimate saved to your PlayStation Network account, you can load that data and get Growth Points equivalent to the total number of K.O.s recorded on that data. It’s a great way to power level some characters early on if you do.

Conquering the battlefield with new improvements and a neat new magic system, Warriors Orochi 4 is a welcome addition for the series and stands as one of the best overall games in Koei Tecmo's beloved hack n' slash genre.