White Shadows PS5 Review – White Shadows is the debut game for Cologne-based studio Monokel. Described as a “modern fable,” the seven-man team have sculpted a beautifully monotonous and atmospheric dystopia to tell their tale, and they’ve clearly got things to say about modern society.

While the artistic direction of White Shadows is truly awe-inspiring from start to finish, it is unwittingly betrayed by derivativeness and poor performance far too often. Worst of all, the mission for social commentary does not land coherently, or contribute to the narrative in any meaningful way.

There are two things that are immediately striking about the presentation of White Shadows. One of which is the gorgeous aesthetic of the world you are hurled into. The world depicts an industrial post apocalyptic world coloured exclusively monochromatically. Through a combination of stylish lighting, depth of view and film noir type grain, there is an unbelievable atmosphere to the game. 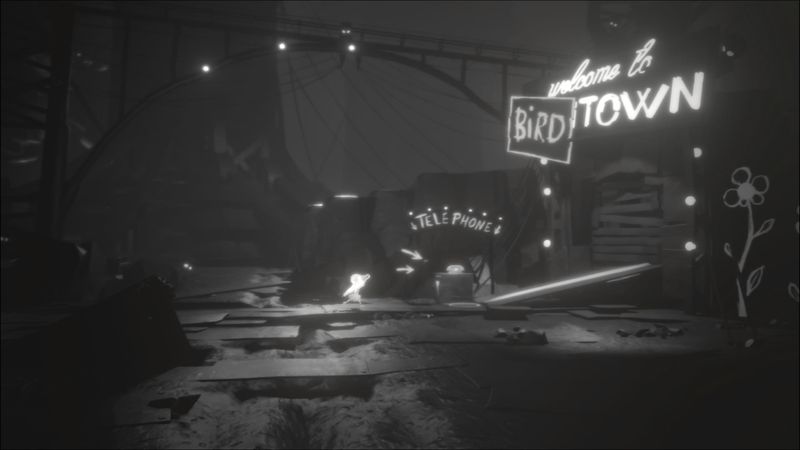 Behind your 2D platforming plane, the game passes through multiple wonderful vistas of a broken and hopeless world. Not only does each scene deliver a wonderful view of art, but the world itself feels like it can come alive and eat you at any moment.

Even in the less hazardous scenes, there is so much detail in the depth of the players view. Whether it’s fields of machinery stretching miles off in the distance, or the haunting figures of cartoonish animals living their desperate lives, there is always something poignant to take notice of.

The sensory experience is all the more heightened by a superb soundtrack. While you’re immersed deeply in the surrealist sections of the game, Monokel have perfectly inserted classic themes, such as Rise of the Valkyries and Dance of The Sugar Plum Fairy. The result is a soundtrack that is astoundingly complimentary to the tone of game. 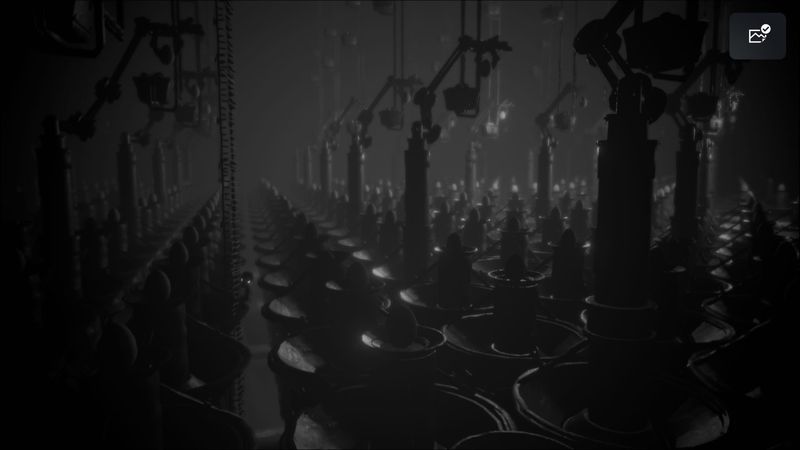 Unfortunately, many of these masterfully directed moments are tarnished by the second most striking thing presented. The performance of the game is, in a word, awful. In fact, the very first scene in the game, where the anthropomorphic bird player character tumbles down a slide, is unimaginably stuttered.

Virtually every time the scene gets busy, which is fairly often, the frame rate tanks. Moments where you should be flooded with awe for the artistry end being cause for frustration. Perhaps not all players will be so jarred by this, but this is certainly well below par for a game running on a next generation console.

While the frame rate drops are certainly frequent and annoying, they do manage to avoid a lot of the key points of gameplay. For the most part, the platforming and puzzle sections are generally smooth. However, these elements of White Shadows are problematic in their own right. 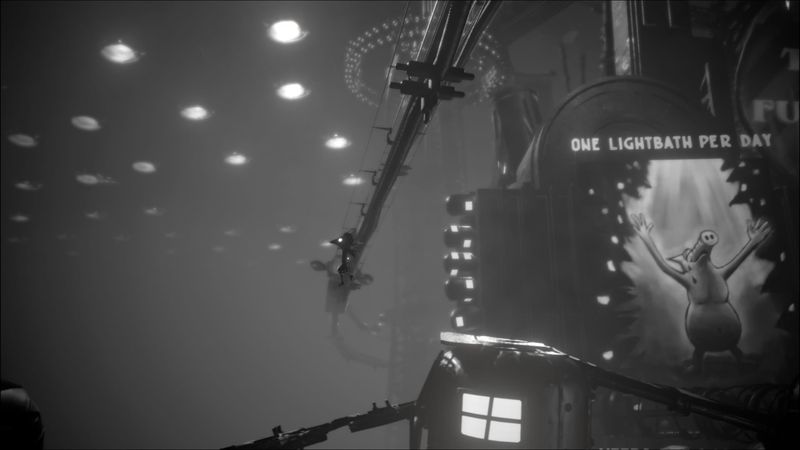 The hallmark of a good platform game is traversal that feels good. White Shadow is sorely lacking in this regard. Walking has no audible feedback and is laboriously slow. It’s actually much quicker to use your oddly accelerating floaty jump to get around.

Due to this strange pacing of your jump, it’s easy to overdo small gaps. This is particularly annoying in certain set pieces in the game where lots of timed jumps are required. Furthermore there is at least one severe bug in the game where an unfortunate step can result in a never-ending death loop on respawn. Hopefully this will be fixed with a patch.

The other issue with jumping in White Shadows is a question of design. You are unable to manoeuvre yourself mid-air, which on one hand could be argued as being more realistic. On the other hand it makes for very tedious sections of the game. 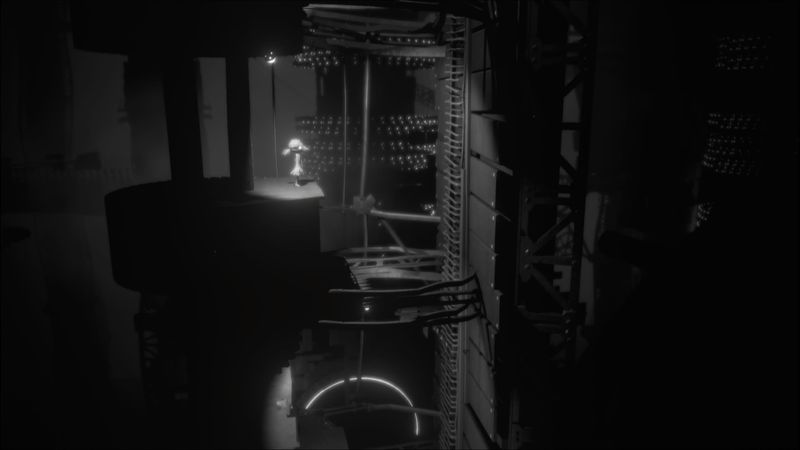 For instance, a section of the game sees the player dropping down a narrow tunnel, with platforms on both sides. Drops must be timed, as a monorail train intermittently blazes the space between. On other platformers where mobility is more generous, this mildly tasking obstacle could be cleared with ease. However on White Shadows, it is just a time consuming and unrewarding bout of unoriginal platforming.

The puzzles are very few, and either uninspired or unintuitive. The first one in particular can be passed by spamming guesses without really understanding the parameters. Instead, the unlikely saviour of the generally lacklustre gameplay comes from its stealth sections. 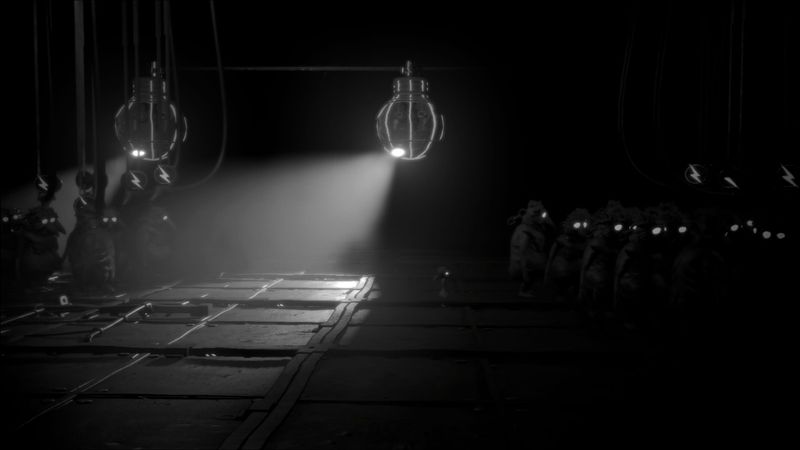 The best bits of White Shadow’s gameplay are in small sections of the game where our young heroine is forced to evade the disintegrating lights of the game’s antagonists, and overlords of the tragic world. Sometimes this involves hiding amongst herds of aloof pigs, or shrouding yourself within a pile of following baby chicks. The little critters are especially interesting in terms of mechanics.

At various points in the game these chicks will appear during the darker moments of the game. Not only are you occasionally forced to witness, or even participate in their demise, but during a flashback scene you actually play as one. As they clutter and pile on each other, you can also mount them as a platform.

Certainly it’s a shame that this wasn’t more of a feature in the game. This interaction and mechanic is interesting enough to be utilised more frequently, and there’s a sense that even more could have been done with it. It’s especially tragic since the other gameplay elements that fill the experience are so underwhelming. 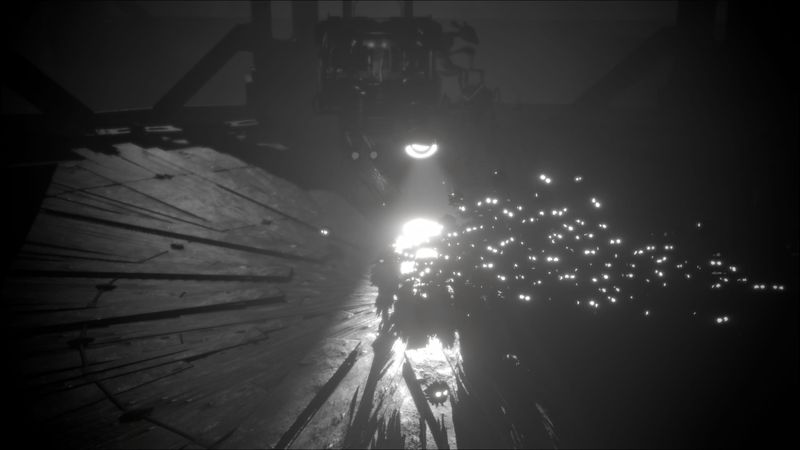 Trying Too Hard To Be Clever

The creative director of the game has stated that White Shadows is very much intended as social commentary; a dark mirror that reflects aspects of the real world. However, it isn’t like he really needed to, since these intentions are heavily inferred in the trigger warning that preludes the game. As a result it’s impossible for any player to experience this title without them in mind.

Whilst a poignant social comment can always elevate a narrative to a high echelon of significance, this preoccupation is entirely just a hinderance for White Shadows. Monokel designed the game with exploration of mature themes in mind. Namely; inequality, racism and oppression. In practice, the analogies within the setting feel a bit on the nose and contrived.

The plot sees the aforementioned heroine attempting to escape the hellish industrial metropolis. On her journey she encounters her species being harvested for batteries to power light. Upon stumbling into a refuge for her kind, deep underground, it is revealed that the birds were unjustly blamed for a plague that ravished the land. The analogy here is fairly obvious. 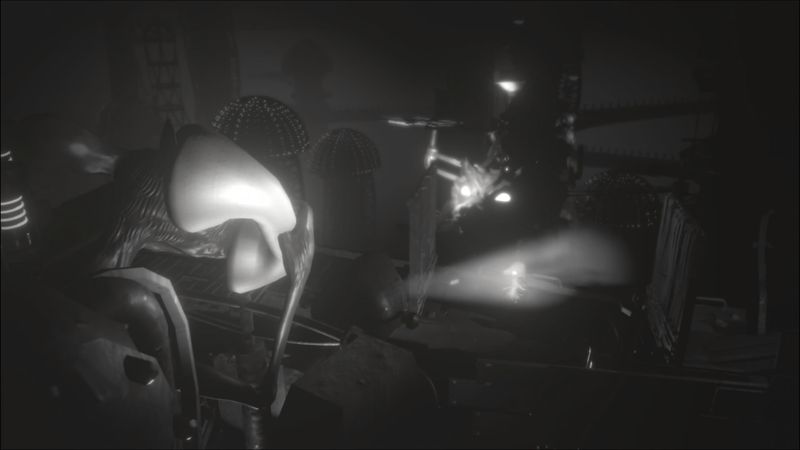 Where the general metaphor gets a bit convoluted is in presenting of another analogy to real world bigotry. A sage-like survivor bird reveals to the heroine, who is also apparently revered as a prophet, that the tyrannical wolf clan have convinced the animal population that they must take a daily light bath to protect them from the plague.

When stumbling into a deadly circus, the player character is berated as a bird, and as a reward for surviving, also turned… white with light. The two clear references to racism within society sort of crowd each other in a symbolic sense, and feel more of a fashionable inclusion rather than telling any sort of allegory about modern times.

However the real crime is the absence of any real narrative outside of this attempt at social commentary. The bulk of the plot, as just explained, takes about 3.5 hours of the four-hour playtime. Without giving any spoilers, there’s very little that happens after that. 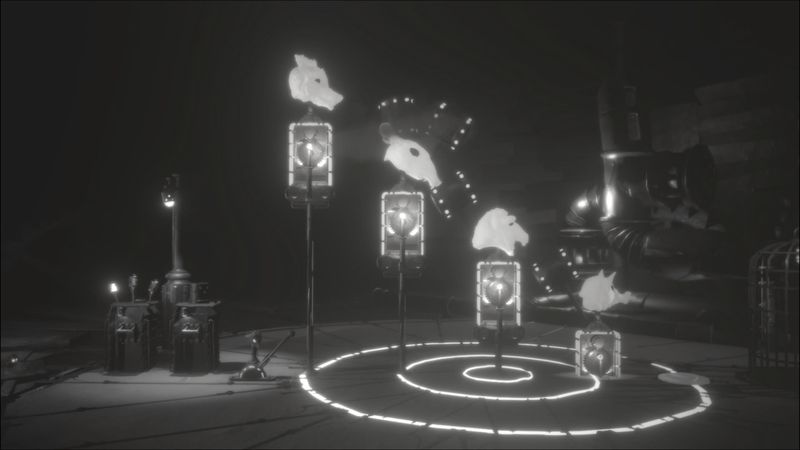 Considering the lengthy setup for the developers mission of evoking political thought, all they’ve really achieved is a premise. In terms of where the narrative launches from there, the answer is sadly nowhere.

A Messy Piece Of Art That Has Its Priorities Wrong

The primary achievement of White Shadows is that it conjures an engrossing world that will transfix players with its art. However, it couldn’t be considered an original display, clearly taking heavy influences from the likes of Limbo and INSIDE. In any case, as gorgeous as it is visually, the frame rate drops are unforgivable at times.

The real problems with White Shadows are unfortunately the very things that are fundamental to a modern game; gameplay and narrative. Too much of the core loop and obstacles are unimaginative, and there isn’t much of a story structure to accompany. What there is however, is a few indelicate metaphors about society that don’t amount to any sort of memorable apologue.

Whilst it’s very tempting to applaud Monokel for daring to take on sensitive themes and shine a light on important issues, it just hasn’t been executed very well in White Shadows. Moreover, you can’t help but feel that the absolute basics of game design have been hideously overlooked in the attempt.

There's no doubt that White Shadows has something to offer in raw artistic spectacle, but there's far too many issues with the game to be celebrated. It comes across as a game that has its priorities completely upside down. While it's commendably brave that a brand new studio would explore delicate themes on their debut game, this preoccupation has apparently left no mind toward the fundamentals of what makes a gaming experience rewarding. Furthermore, these themes have not been handled in a very sophisticated manner. Social commentary aside, unoriginal level design, a forgettable narrative and poor frame performance sadly render White Shadows as one you can miss.