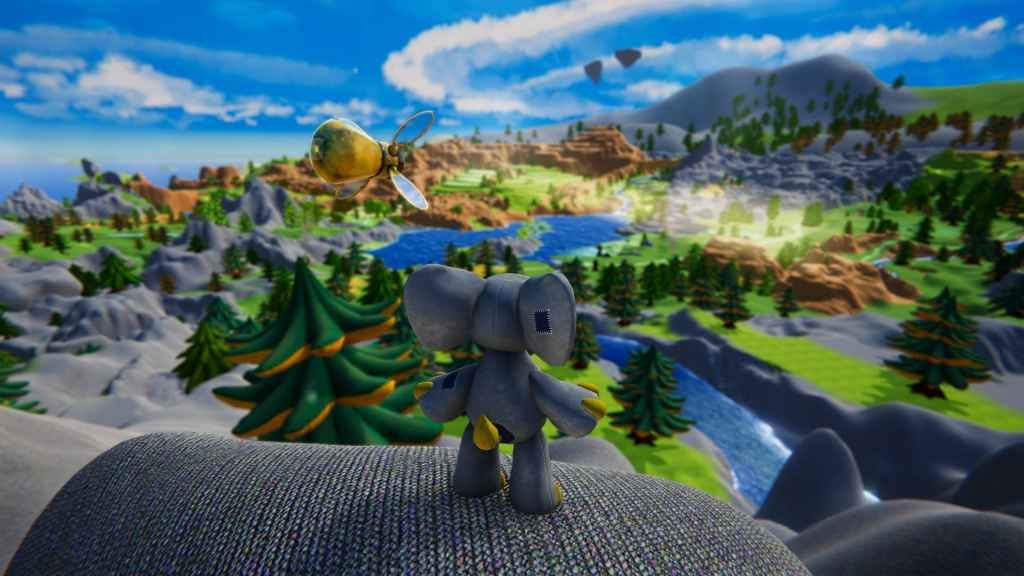 Allow me to regale you with a story of Woven,

A game that could have used more time in the oven.

A game clearly crafted with love and great care,

But which still made me want to yank out all my hair.

Woven Is Built Around A Cool Mechanic

Woven follows the elephant Stuffy wherever he go (whatever, that rhyme was dope. Y’all just jealous.).

Over hill and dale, Stuffy wanders by numerous means,

Stuffy starts as a pachyderm, but that doesn’t last long,

New body patterns are unlocked by small puzzles with songs.

That play in a pattern not far from Guitar Hero,

Though the first time you try, your success will be zero.

For the controls that you use to hit notes are quite clunky,

In a game made for kids, these puzzles are quite funky.

And frustrating, difficult, tough to control –

Each time I tried, I cried “These puzzles are bull!”.

But once you succeed, you will change Stuffy’s body,

And appearance from solid – to stripey – to dotty.

Mix and match in machines that use magical thread.

A possum! An aardvark! A snout or a beak!

An adorable creature! An unholy freak!

With each pattern you gain, new abilities come,

But the way that you trigger them is really quite dumb.

In a world that makes one want to run and to shout,

Dumb Stuffy can really only lumber about.

Or do any of the things that make video games fun.

Unless he stops and stands still in a clearly marked space,

To trigger an ability while he poses in place.

Near a river, for example, Stuffy stands near a stone,

You trigger a jump, and Stuffy does it alone.

In a cut scene (the cut scenes are really so numerous,

That if cut scenes were cigarettes, Woven would be tumorous).

Navigation In Woven Is Frustrating

So the main trick of playing through Woven, you see,

Is wearing the correct body parts for where you happen to be.

To trigger the powers that can help with traversal,

While dealing with the frustration of constant reversal.

Because if you are wrong, backtracking you go,

Through samey environments, and Stuffy is sloooow.

And no map is given to help with navigation,

And so the player is given to suffer frustration.

For with a wide world with such twists and such turns,

Woven requires far more patience from the player than it earns.

And though the world is ambitious and very low stress,

Woven is something of a technical mess.

With pop-up and stutters and weird shifting ground,

Every stone, flower, and tree Stuffy must walk around.

And every tiny hillside or slope or small rise,

Stops Stuffy cold, no matter how hard he tries.

So I soon hated Stuffy, though he was adorable,

I’m afraid I found the gameplay of Woven to be quite deplorable.

And with rolling hills of yarn and skies so very blue,

The graphics can sometimes seem quite PS2.

And what of the story you ask? It’s a lot,

With delivery made for the tiniest tots.

Though he occasionally throws the entire concept of cadence out the window, which pretty much gives me a seizure.

The Story In Woven Is Simple And Cute

Stuffy lives in a world of yarn, felt, and cloth,

The sun always shines; the whole world is soft.

Glitch is made of hard metal, not a tuck or a stitch.

Glitch has lost memories of a violent, sad past,

Though some will return before much time has passed.

As Glitch finds and attaches to ports in the ground,

Some flashbacks fill in bits of the past and expound.

On attacks from strange creatures, they set Glitch’s mind a-churn,

With fear that these giant mechanical bugs might return.

So Stuffy and Glitch set out to explore the world,

And all over the place the narrator chimes in,

So with its childlike delivery and its puzzles – a chore,

I was forced to wonder just who Woven is for.

Kids would get stuck wandering in circles – quite lost,

Adults, quickly bored, would tell the game to get tossed.

And while Alterego have made something quite sweet,

If Woven were a cupcake it would be too sweet to eat.

But the heart and the love in this game do shine though,

In designing a game, there are far worse things to do.

It’s heart in the right place, at time Woven shines,

With delightful small moments – but the large moments grind.

And why does this rhyme? Well, you know how it goes…

Woven was so sweet, I didn’t have the heart to dis it with prose.

Review code kindly supplied by the publisher. Woven will be available for purchase from the PlayStation Store on November 15.

Alteregos’s Woven is a sweet story built around a very cool mechanic – switching out body parts to change abilities. Unfortunately, the lack of a map (and lack of direct control of Stuffy’s powers) cause Woven to feel bewildering, with puzzles that require more dexterity than what the tiny kids that would enjoy the story could manage. Woven is so sweet that it is begging to be loved, but in the end it is simply too clunky to be endured.