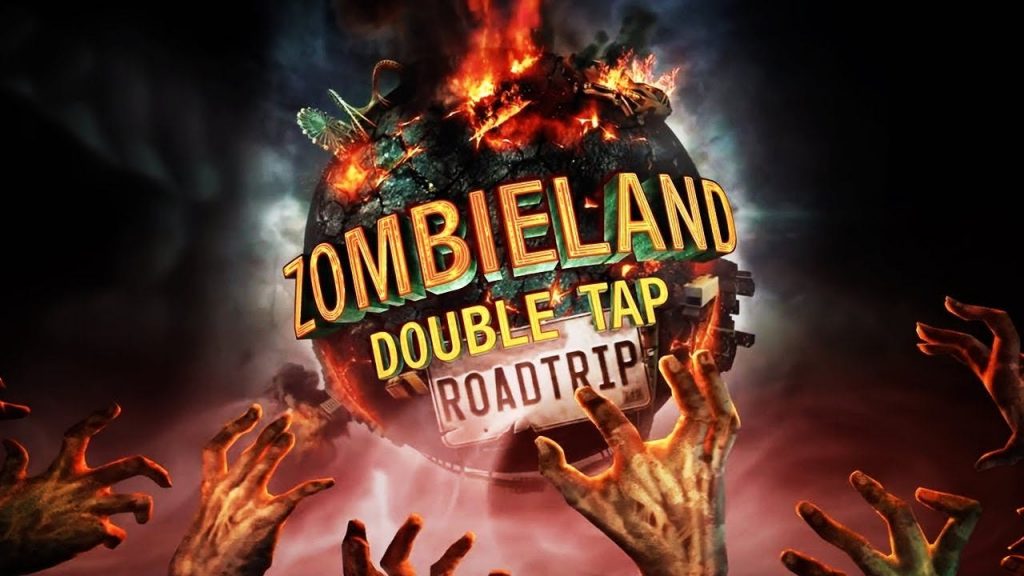 You would think video games and movies would be more complementary to one another but it’s rare that anything good comes from their partnership. Movies based on video games haven’t been Oscar contenders and games that exist as a movie tie in are generally lazy promotional tools that rarely appeal to any audience. I had hope that Zombieland: Double Tap Road Trip would break free from the curse of bad movie tie-ins as it almost certainly seemed the ideal setting for a game but unfortunately, mediocrity, forced bad dialogue, and an expensive price tag proves otherwise.

Zombieland: Double Tap Road Trip is a twin-stick shooter. How does one ruin a twin-stick shooter you ask? First off by making you sit through cringe-worthy dialog delivered by voice actors trying their best to be Woody Harrelson, Emma Stone, and Jesse Eisenberg, with the actual Abigail Breslin lending her voice to reprise her role as Little Rock.

The voice acting is competent enough, it’s not their fault they are poorly written, but I just didn’t really care what they were saying, I just wanted to shoot zombies, after all this is a game, not a movie. Even the dialog that can be skipped requires some work as you must hit a button after each and every line delivered to skip it.

I generally love twin-stick shooters but Zombieland’s slow pacing in comparison to the twitchy fast fun of the likes of Dead Nation and Tesla vs Lovecraft makes it almost impossible to be challenged by the zombie hordes. The game plays out in a series of missions and in the event you find yourself dying (of boredom), you must start all the way at the beginning of the level.

Zombieland Double Tap Road Trip can be played solo or up to four players in local co-op. I played through it solo and perhaps it’s more fun with acquaintances but I truly believe friends shouldn’t let friends play bad video games. Each character has a unique special move and an upgradeable skill tree, but the upgrades seemed to make very little difference in combat, making the whole endeavor feel a little pointless as a result.

The various zombies that you’ll be tasked with eviscertaing include the likes of clowns and ninjas are pretty basic enemies with similar attacks. That’s not unusual in a twin-stick shooter, but where Zombieland fails is that the boss enemies are essentially just more of the same, albeit with added bullet spongy tedium.

Even the weapons are underwhelming, though there’s an arsenal of guns, grenades, and melee weapons to be found in the trunks of cars and crates you find in each level it’s all stuff you’ve seen before with very little to meaningfully separate it from the aforementioned superior likes of Dead Nation and Tesla Vs Lovecraft. Handily though, picking up a new weapon drops your currently equipped but if it’s not what you want or less powerful than what you had, you can swap it out for the one you just discarded.

Zombieland Double Tap Road Trip isn’t exactly pushing the graphics bar to a new level either, which is fine, except for ultra-lethargic loading times rival that of EA’s beleaguered Anthem. Ok, I’m exaggerating a bit there, but it does have a somewhat slow load time for such a basic game. I also experienced a few incidents where Zombieland Double Tap Road Trip would freeze, but overall it performed pretty well performance-wise. I hate focusing just on the negatives but the game doesn’t offer much to praise except that the controls are both intuitive and responsive – the most very basic of qualities for any top down shooter worth its salt.

Zombieland Double Tap Road Trip is short too – clocking in at just over two hours, which I guess is a blessing and a curse. No one wants to pay $40 for a two-hour bland game, but spending any longer with it would be cruel and unusual punishment.

Zombieland: Double Tap Road Trip was developed and published by GameMill Entertainment and is out now on PS4, Xbox One, Switch, and PC

Zombieland Double Tap Road Trip completely strips away the charm and wit which makes the films so endearing and replaces it with cheesy mind-numbing dialog sprinkled with dull gameplay. It's basically an overpriced two-hour promo for the movie that has very little to offer unless you are a hardcore fan of twin-stick shooters or Abigail Breslin.