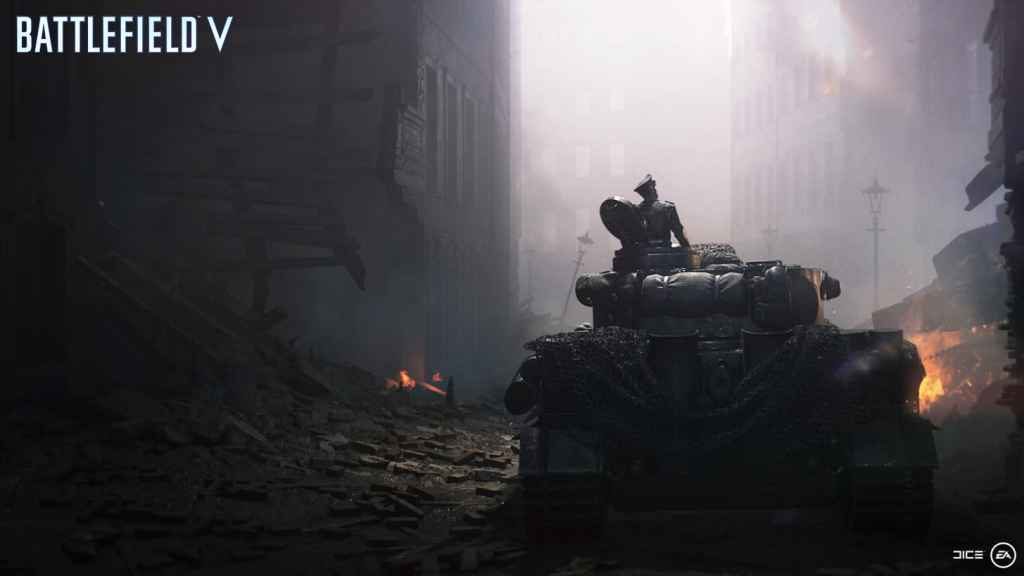 Unlike the previous three, there are only six letters hidden throughout Battlefield 5’s fourth and final War Story, The Last Tiger.

The reward for obtaining them is also rather different; a unique Tank Skin as opposed to the trio of special melee weapons offered in Under No Flag, Nordlys, and Tirailleur. Although, let’s be honest, the average completionist will hunt down every last collectible in any given game, even if the prize for doing so is nothing more than a warm pat on the back and a hearty “job well done”.

Anyway, the purpose of today’s article is to help players find each and every letter hidden throughout The Last Tiger. So, let’s crack on.

#1 Lives of the Children

After exiting the tank at the beginning of chapter, turn about face and head a few steps north until you see an alleyway on your right (just behind a burnt-out tram trolley).

The alley is blocked off about halfway down by some debris, in front of which is buried the first letter.

#2 I Can Only Surmise

Letter two is relatively nearby the first.

Simply head west and a tad to the north of letter one, aiming for the street directly opposite. After passing a couple of small sandbag walls, you’ll come across a metal gate.

Continue on through the gate and turn left almost immediately. You should now be in a little stone courtyard with a ladder located on the righthand side.

Ascend the ladder and jump through the open window on your left, head down the hallway, and enter the adjoining room on your right.

Letter number two can be found inside this room, on top of a wooden desk.

#3 The Mercury in the Barometer

With letter two in your possession, continue on towards the objective (an anti-aircraft gun emplacement) in a westerly direction.

As you pass through yet another metal gate, you’ll notice a derelict building on the street corner opposite and slightly to the left. Head inside and climb the debris until you reach the second story.

This part of the house has been blown wide open by recent artillery fire, providing access to two additional rooms. The leftmost of these, accessed by mantling the remains of a wall on your right, marks the final resting place of a dead soldier and the third letter.

Retrace your steps and exit the building via the back door, in the direction of the primary objective.

In front of you will be a public park filled with sandbags, barbed wire fencing, and other signs of recent military action.

Now the letter itself isn’t actually located in the park itself, but in a building on the opposite street directly north (right) of the central platform.

Hop over the hedge on the outskirts of the park and proceed towards the building with the blue awning. Head inside and, remaining on the ground floor, look for a stack of wooden crates at the rear.

As with so many of the previous three War Stories, letter four can be found perched atop the foremost crate.

We’re jumping ahead a bit here, to the point just after you’ve seized the anti-aircraft gun in the previous section and have been given the task of destroying a number of sensitive materials.

Leave the tank and travel south, taking a left at the junction. At the end of this street is an abandoned roadblock, with the remains of some more ad hoc fortifications located on the left.

Follow the path between the sandbags, barbed wire etc. and you’ll emerge into an open space between two apartment blocks, to the rear of which is a rather large and conspicuous hole in the concrete paving.

Drop down here and you’ll find yourself in the basement of the adjoining building. There’s a desk in the backroom (on your left) which, as well as being extremely well lit, houses the penultimate letter.

From here, return to the tank you exited at the beginning of this section.

A stone’s throw away, to the west of your current position and vaguely in the direction of your next objective, you’ll see even more ruined buildings. Clamber over these and drop down into the courtyard below (you know you’re in the right place if you can see two troop transports).

Trace the line of the wall to your left and, in a few steps, you’ll reach a small tunnel. Head on through, turning left immediately you emerge out the other side; just in front of you will be a couple of ammo crates and, more importantly, The Last Tiger’s sixth and final letter.

You should now have every last letter safely in your possession, assuming you’ve already thoroughly explored the previous three missions.

Hopefully these guides have been of some use to you during your quest, and helped you get the most out of DICE’s latest contribution to the FPS genre.