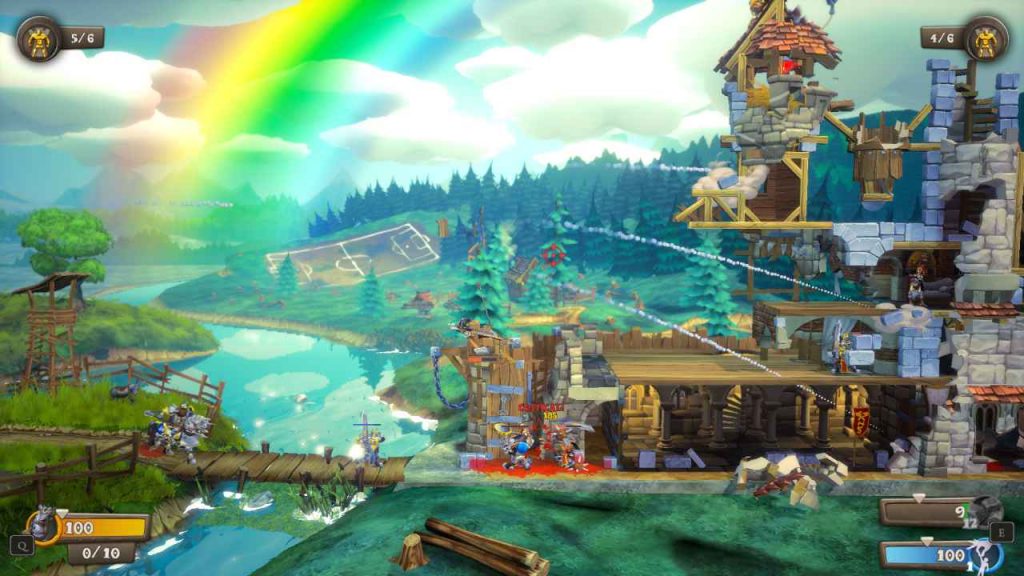 Castle Storm II PS4 Preview – I played the first Castle Storm – briefly – when it released in back in 2013. I went poking around in my PlayStation library looking for the original game to take it for a refresher run, before realizing that I actually bought the original game on my old, beat-up Xbox 360 – so that refresher ain’t happening. I’m philosophically opposed to putting batteries in those dang controllers.

Anyhow, I have some dusty memories of Castle Storm. I seem to recall some hero guy walking from right to left across the screen and attacking bad guys, while I took pot shots at them with a ballista. I recall thinking that the game was kind of a mix between an action game and a tower defense game, and I do think I played it a bit before eventually wandering off into the wastes of Fallout 3 for the twentieth time.

Castle Storm II Is Much Deeper Than Expected

I’ve played all of Zen Studio’s recent releases, and have found them to be excellent across the board. But my memories of Castle Storm were of a game that I tinkered around with for a bit before veering off. It just never fully grabbed me. So, I wasn’t quite sure what to expect when I booted up an early build of Castle Storm II on PC last week for a PSU preview (the game will release on PC and consoles some time in 2020).

For starters, a great deal of Castle Storm II takes place on a Civilization-style hex board. Players start the game with one hero – a very enthusiastic young fellow who is all about serving the king and ridding the kingdom of bandits and baddies. Right out of the gate, you start moving this dude around the hex board (he has a small number of action points he can burn on each move), planting down farms and mines to start building your resources.

That’s right, Castle Storm II has resource management, and you must continue expanding your holdings in order to keep up with the needs of the kingdom and your growing army. As he wanders about, investigating trouble spots and clearing the fog of war from the map, starter guy (sorry, I don’t recall his name) begins enlisting units into the king’s army to use in battle.

Castle Storm II Has A Unique And Complex Battle System

Battles are plentiful, as enemies lurk all over the map. The battle system in Castle Storm II is utterly unique – unlike any other system I’ve encountered in video games. As such, it may take new players some time to get accustomed to how things work.

Battles play out across a horizontal two-dimensional field. Enemies approach in a stream from off screen on the right, with the player managing the left side of the battlefield. Players have a number of ways to engage with enemies, and juggling these options and managing your resources is the key to successfully seeing battles through.

Players can deploy various combinations of units from armies that they have recruited. In my time with Castle Storm II, I gathered two archer armies and two melee armies. Each of these armies contains twenty units, which can be deployed one by one to march across the field to do battle. A resource meter slowly fills, allowing you to occasionally send more guys into battle.

These guys were pretty much cannon fodder for me, as they weren’t terribly effective at anything except slowing down the enemy. However, it is apparent that you will be able to upgrade these guys in the final game in a number of interesting ways.

Much more effective is your hero unit, who is an absolute beast on the battlefield – I f you use him effectively. He has a variety of moves, both melee and ranged. The hero unit does not automatically deploy, however – and left to his own devices, he can quickly get himself killed if you are not careful. Luckily, players can “possess” the hero character and manage his actions directly.

Additionally, players have a ballista and magic spells they can use against enemies, taking pot shots at them from a distance. If this all sounds like a lot to manage – it is, but once you get the hang of things, the challenge of finding the right combination of tools to defeat enemies can be a lot of fun.

I often preferred to send in units to slow down the encroaching armies (or wolves, or zombies, or whatever), while I picked them off with the ballista. However, this approach could quickly go wrong, with my little units getting overwhelmed. This would force me to deploy my hero unit by his lonesome, which brings a sudden videogame-y immediacy to what was a more strategic battle.

There are additional elements in Castle Storm II that were not yet available in the preview build I played, which will likely serve to make the game even deeper and more involving. A castle-building mini-game was hinted at, and a multiplayer component looks as though it will allow multiple kingdoms to exist on the same map, fighting over resources and attacking each other’s castles.

Castle Storm II is shaping up to be a much bigger and deeper game than I was expecting. Having had a taste of this game, I am looking forward to digging into the full game and trying out the multiplayer. True to Zen Studio’s recent output, Castle Storm II looks like another in a string of genre defying (and defining) games.

Castle Storm II will release on PlayStation 4 later this year.