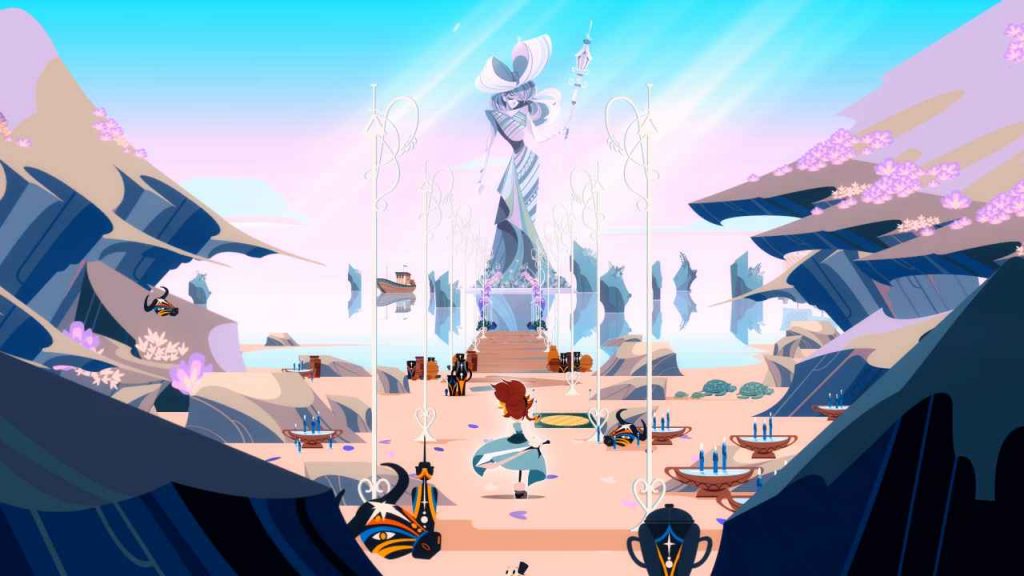 Cris Tales PS5 Preview – Over the last several years, Modus Games has been steadily carving out a spot for itself in the indie games market. Just a glace at the company’s 2020 roster reveals a stunning lineup of quality games: Trine 4, Rock of Ages III, the stunning beautiful First on Stadia narrative platformer Lost Words – Beyond the Page, September’s excellent-looking Ary and the Secret of Seasons, and perhaps the crown jewel in this collection, Cris Tales.

Cris Tales has been announced to release on PlayStation 4, Nintendo Switch, Xbox One, Steam, and Stadia on November 17, 2020, and earlier this week it was announced that Modus Games would release their epic JRPG on PlayStation 5. Only glancing at a screenshot or two, gamers might wonder why Cris Tales would need all of that extra power, but rest assured – this is a game that PlayStation 5 owners will be very happy to have running in 4K and with next to no loading times.

There is so much more going on with Cris Tales than initially meets the eye. In motion, Cris Tales is one of the most visually unique and beautiful games I’ve ever seen, and a closer look at the gameplay mechanics reveals what might just be a new RPG classic.

When Cris Tales was announced in June 2019, Modus Games dropped a 45-minute playable demo onto Steam – which is still available and highly recommended. We’ve played that, and also sat in on an hour-long gameplay preview with Derek Neal – Executive Vice President of Production, Kosmos Stocking, Associate Producer at Modus Games, and Carlos Rocha Silva – Studio Head of Dreams Uncorporated – SYCK.

Just an hour spent with Cris Tales reveals a few simple facts: Cris Tales is one of the more gorgeous games we’ve ever seen, and the gameplay hook is so unbelievably cool and unique that we guarantee you’ve never played anything like it.

On Cris Tales official site, Modus states that the game was “inspired by timeless JRPGs like Chrono Trigger, Final Fantasy VI, Valkyrie Profile, and modern classics like Bravely Default and Persona 5”. That might seem to be a bold statement, until you get a look at the mind-bending gameplay dynamic at play in Cris Tales.

Crisbell’s Time Mage abilities allow her to see the past, present, and future – all at once. In order to represent this dynamic graphically, the artists at Dreams Uncorporated divide the image on-screen into three parts. As Crisbell walks about town, players see the past on the left third of the screen, the present in the middle, and the future on the right.

Passing a character in the street, for example, players might see a young child on the left, then a young person in the middle of the screen, then a doddering elder on the right. Sometimes characters will disappear outright on the right side of the screen, indicating that they have died.

But it isn’t just characters that are depicted as impacted by the ravages of time – entire cities undergo massive changes as Crisbell passes them by, with buildings appearing, disappearing, or crumbling with age. To pull this effect off, the developers had to create each element at least three times in order to depict the passage of time. But it gets much more complicated than that.

Through her actions, Crisbell is able to impact the present and the past, which has dramatic repercussions on the future. Players choices will change the way the future states are depicted. According to the developers, some objects had to be created as many as twenty times to compensate for all of the variations that players could possibly create. In practice, the effect is seamless, but it is actually the outcome of months of careful planning and work.

The environment is not the only way that Crisbell’s Time Mage powers manifest in Cris Tales. She also brings her formidable skills into battle – and the end result is a very unique and fun take on turn-based JRPG battle systems.

The core of the combat is a timing-based attack and defend mechanic, similar to that found in the Mario RPG series. Players take a swing at enemies, and if they time things correctly, a second press of the button will allow an additional critical attack. Similarly, a button press at the right time will defend against incoming attacks, mitigating most of the damage. But before long, players will see that Cris Tales’ battle system is far deeper than they may have expected.

Crisbell is able to use her time skills to send enemies forward and backward in time. For example, when fighting a deadly soldier, Crisbell might choose to send them backward in time, to a period when they were an awkward teenager. Or she might elect to fling the soldier forward in time, weakening them with old age. While it is possible to beat enemies by simply pounding away at them, using these powers makes combat much more fun and dynamic.

Crisbell and her friends can further alter the flow of combat by manipulating character turn order – depicted at the top of the screen in a series of character portraits. By defending or passing on their turns, Crisbell and her party can change their turn order enough to set up powerful combos – or simply continue juggling enemies to prevent them from getting a turn.

All of the other standard JRPG turn-based mechanics are present and accounted for; commands like “item” and “fight” and “flee” are right where you would expect them to be. But – particularly in long boss battles – using Crisbell’s time powers will be key to success.

The material in the preview we saw was different from that contained in the Steam demo – which seems to contain the opening moments of the game. In the demo, Crisbell, a young orphan, learns that she has time powers – in particular, the ability to see forward and backwards in time, simultaneously. She engages in some brief quests, and becomes acquainted with both her powers and her first party members.

This preview material was from a little later in the game. Crisbell has become more comfortable with her fledgling abilities and has gathered a small team of allies around her – including Wilhelm, a fellow time mage who is at once disdainful and awed by Crisbell’s powers. Together, they make their way to Saint Clarity, a multi-level city that hides economic inequality and political intrigue behind a beautiful veneer.

Saint Clarity is divided into two levels. The more economically challenged lower level floods every few minutes from the runoff draining from the sparkling and privileged upper level. Using her powers to see forward in time, Crisbell witnesses a dire future for this city, and she and her friends set out to avert disaster.

Saint Clarity is a colorful and vibrant setting, full of interesting characters that have fully developed histories and relationships. Using Crisbell’s ability to see into the past, players will learn the origins of almost every character they encounter – which can be surprising as well as enlightening.

According to Modus Games, Saint Clarity and the area surrounding it only represents about 20% of the full game, which will take players approximately 20 – 25 hours to complete. Of course, for players like me that enjoy the grind, that can easily be stretched into 40 hours or more.

The artwork in Cris Tales is hand drawn, providing the graphic and animation with an amazing stylistic visual palate that falls somewhere between the works of Disney Studios and the very best anime. The characters are depicted within the world with an incredible amount of detail, from their dynamic facial expressions in battle to the way that Crisbell daintily lifts the front of her dress while skipping down a road. We’ve seen a lot of hand animation in games before, but never quite this smooth and appealing.

It is this animation that will have players’ jaws dropping, as Cris Tales occasionally stops the action to send the camera swooping through the environment, revealing the depth of artistry and colorful detail that the designers put into the game. The world in Cris Tales looks crisp and unique, with the visuals drawing from the developers at Dreams Uncorporated’s Colombian culture.

That rich culture permeates every aspect of Cris Tales, from the character and costume design to the architecture on display in the sun-drenched cities. Brilliant colors dapple the landscape, and even the actor’s voices are utterly unlike what you might be expecting. Even the excellent soundtrack by Tyson Wernli contains unmistakable Colombian rhythms and instrumentation.

This focus on Colombian art, design, and culture makes Cris Tales feel completely unique in the video game market. Games in this genre are almost exclusively dressed up in Japanese anime-style artwork, and having a game embrace a different culture subverts players expectations in a very good way. Filtering JRPG gameplay through this rich cultural lens leaves Cris Tales feeling like nothing we’ve ever seen before in gaming – something utterly original, surprising and beautiful.

A JRPG With More To Offer

Many of the usual JRPG tropes are present in Cris Tales. Mechanics like the world map (and eventually gaining vehicles to traverse it in new ways), random encounters, and plentiful side quests are all represented in Cris Tales. Many of these mechanics, however, have a unique spin that is sure to keep Cris Tales feeling fresh and unique.

The “Scan” power, for example, typically would allow players to see an enemy’s hit points, and maybe reveal an elemental weakness. In Cris Tales, however, players will find that they must scan an enemy three times in order to get the full picture – once in the present, the past, and the future. Once this is achieved though, players will be able to see that enemy type’s hit points on display for the rest of the game.

Much of Cris Tales will be familiar to JRPG fans, but the focus on creating a love letter to the genre infused with new ideas has created a stunningly original work – full of charm, beauty, and wonder. It is quite a feat to make JRPG mechanics feel fresh again, and the team behind Cris Tales is definitely up to the task. We are very excited to get our hands on the finished product, just to be able to spend more time exploring Crisbell’s gorgeous world.

Cris Tales will release on November 17, 2020 for PlayStation 4, Nintendo Switch, Xbox One, Steam, and Stadia. A PS5 version will be released in the following months.