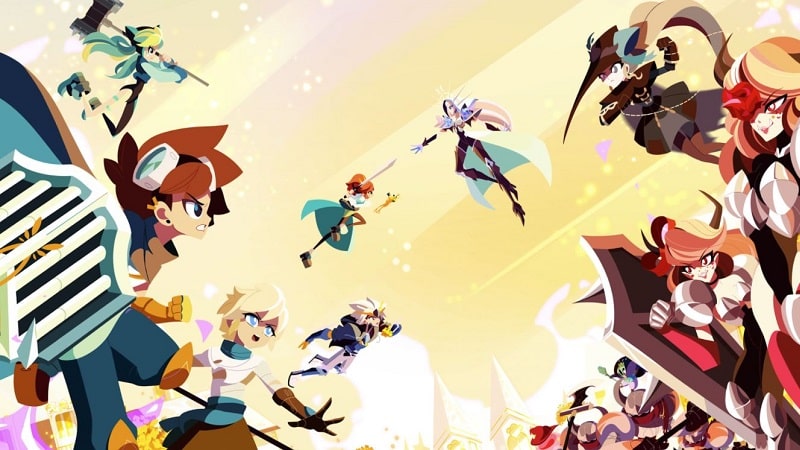 Cris Tales PS5 review. One of the earliest announced JRPGs for PS5, it’s certainly fair to say that its Colombian based developer has had an eye on the genre efforts of old in regards to the design DNA that is threaded through Cris Tales. From the seminal Chrono Trigger to the likes of more recent fare such as Persona 5, the fingerprints of genre greats can be found everywhere in Cris Tales.

However, while Cris Tales is quite content (sometimes to a fault) to go to the well so often when it comes to adhering to the genre bedrock, developers SYCK and Dreams Uncorporated have nonetheless put their own stamp on the proceedings, by diving deep into the time manipulation shenanigans to create a JRPG that has a surprisingly thoughtful combat system which separates itself from its peers.

A JRPG Built Around A Cool Central Mechanic, Rather Than The Opposite Way Around

From the get go, Cris Tales wastes no time in throwing the player face first into a battle encounter, simultaneously familiarising them with the turn based combat system and the oh-so-stylish prismatic user interface which gives more than a cheeky nod in the direction of Atlus’ sublime Persona 5.

Though the usual attack, defend (with a Final Fantasy VIII style timing mechanism in place which rewards a precise double press of the X button with a double attack or successful deflection), item use and skill/spell commands are present and accounted for, it’s really in the time manipulation mechanic that things start to freshen up, so to speak. You see as it turns out the main protagonist, the twee named Crisbell, is actually a time wizard. 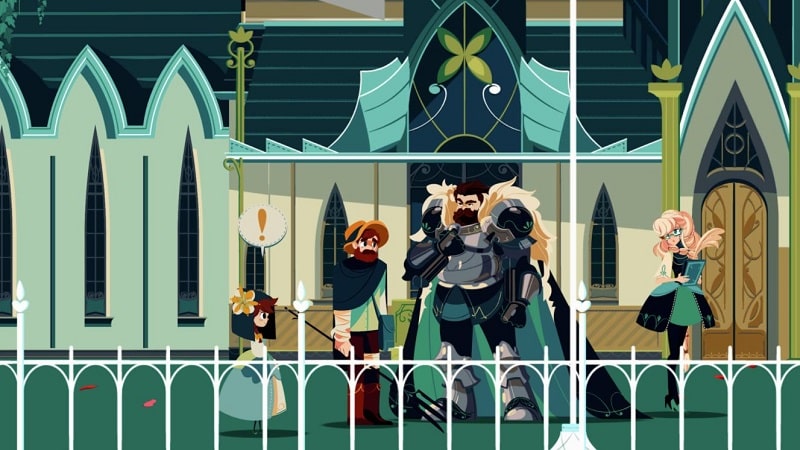 Essentially an anime version of Doctor Strange but with enough saccharine sweetness to rot your face and those of your descendants for the next ten generations, Crisbell can employ an extraordinarily powerful time crystal to force enemies either into the past or future before bringing them back again to the present, should she (well, the player really) so choose.

Now, unless your mind has already taken the bullet train to the event horizon of where all the possibilities of this time magic would invariably coalesce, allow me to provide you with some examples of how wonderfully it works in practice. Imagine you’ve just poisoned some poor sap – normally you would have to wait a few turns for the venom to do its thing, however if you envenom an enemy and then send them into the future, they take the maximum possible amount of damage from the poison as it would have spent that much longer in their body.

Equally, another clever example of how time manipulation happens occurs during the game’s opening combat scenario. Confronted by a towering foe with a massive tower shield, their defence soon proves to be impregnable; turning away even the strongest attacks. However, should you hit them with a water spell and then propel them into the future, a rust effect appears on their shield, making them susceptible to regular attacks as a result. 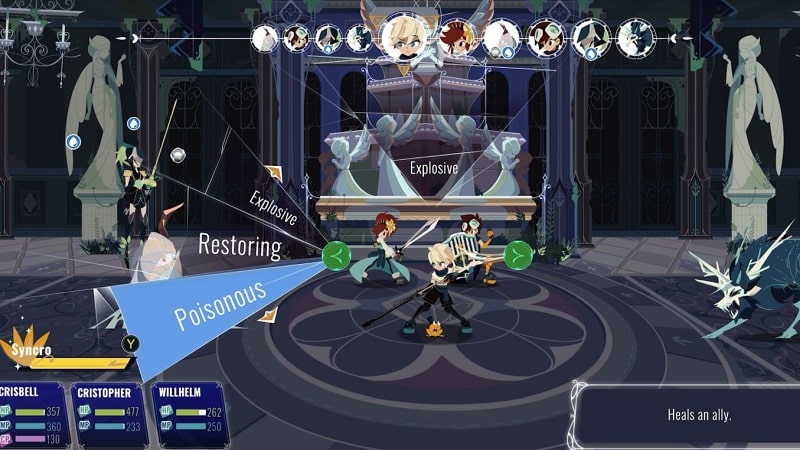 There are other ways that this anachronistic sorcery can surprise and delight too. Sending an enemy warrior to the past for instance, will make them younger and thus capable of both dealing far less damage and also being able to absorb it in turn. Thrusting them into the future however, could conversely make them stronger and much more difficult to deal with. It really depends on the enemy that you’re scrapping with and as such, this whole mechanic has far more depth than you might initially appreciate.

The catch to all of this time magic chicanery however is that the battle scene is split into three portions, with enemies facing you from the left, your party members in the middle and enemies attacking you from the right. This split is important because you can only use past crystals on the enemies to your left and future crystals on those lurking to your right, adding a fair chunk of additional tactical consideration to what is already a fairly sophisticated battle mechanic.

Threaded throughout its design in true chthonic fashion, Cris Tales employ of time manipulation magic is also used to significant effect during exploration, too. Viewing the world through a three panelled triangular prism that mirrors that of the battle scenarios, the past, present and future are represented in the left, center and right portions respectively. In practice, this means that as Crisbell and her companions venture through the world, players get to see the world transform in real-time, seamlessly aging and de-aging depending on the crystal through which they are viewed. 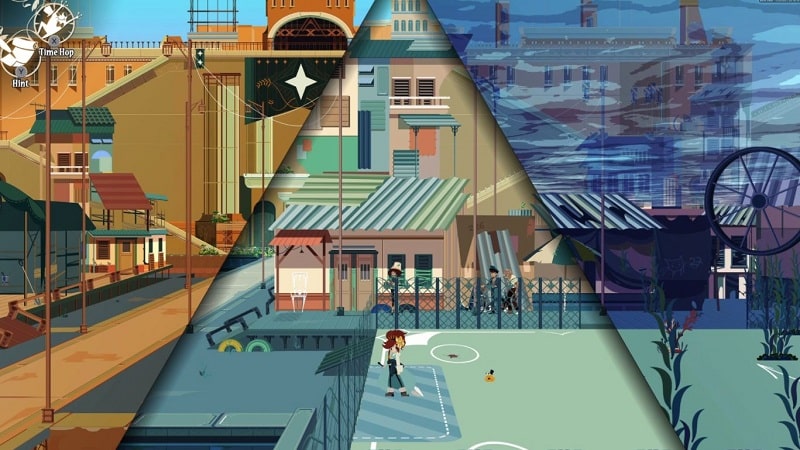 One example of this early on has Crisbell planting a seed inside the present crystal. Peer outside into the future however and that tree has already fully grown and bears fruit which can be harvested and used to complete a quest. Further afield, Cris Tales focus on mucking around with time means that you’ll come across multiple situations that have multiple outcomes which in turn dovetail into the multiple endings branching storyline that the game encompasses.

Certainly as seemingly fresh as this mechanic is, a debt of some kind is assuredly owed to Squaresoft’s excellent Chrono Trigger, but arguably significant time has passed that such a feature now feels fresh again. It’s when we pull back from that eyebrow raising, time-travelling central mechanic and theme of Cris Tales that the rest of the package begins to look much more pedestrian and regular. Being something of an unabashed love letter to the JRPG genre also means that some of its more shopworn tropes are also put on full display.

Random encounters are a constant thorn in Cris Tales and much like the genre entries of old, rely on the player having done sufficient grinding and amassed the requisite healing resources to make it through them. Naturally, this means that you’ll spend a fair chunk of your time smashing up and farming enemies to get currency (marbles) in order to buy those crucial supplies in order to survive consecutive random encounters in the first place. 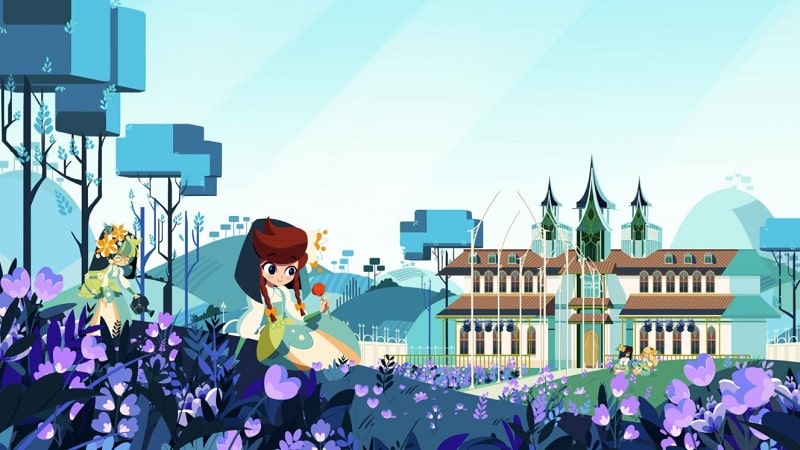 Further ticking the classic JRPG bingo card that Cris Tales holds so tightly to its chest are the other expected winks and nods at the JRPGs of old such as Final Fantasy VI and more come in the form of the airships that you’ll use to get around the game world. Sure enough, there’s nothing wrong with being inspired in this way but you start to reach a point of feeling overly familiar with the game which is at odds with the relatively fresh time-travelling mechanism that arguably sits at the core of Cris Tales enduring appeal.

Where Cris Tales makes its most egregious misstep however is in the world it fashions and the denizens that inhabit it. Though Cris Tales is brazenly inspired by the JRPGs of old and present, the cast of characters and the world in which their plight unfolds quite simply fails to elicit the sort of passionate response that those games did.

Sure enough, you have the main protagonist who is uncertain of themselves and their power, a talking frog (it is a JRPG after all), a cocksure warrior and a variety of taunting, full-fat pantomime evil villains, but none of the characters or their motivations ever really carves out a place in your heart and mind in quite the same way that the likes of the Chrono Trigger, Final Fantasy and Persona games have managed to do. 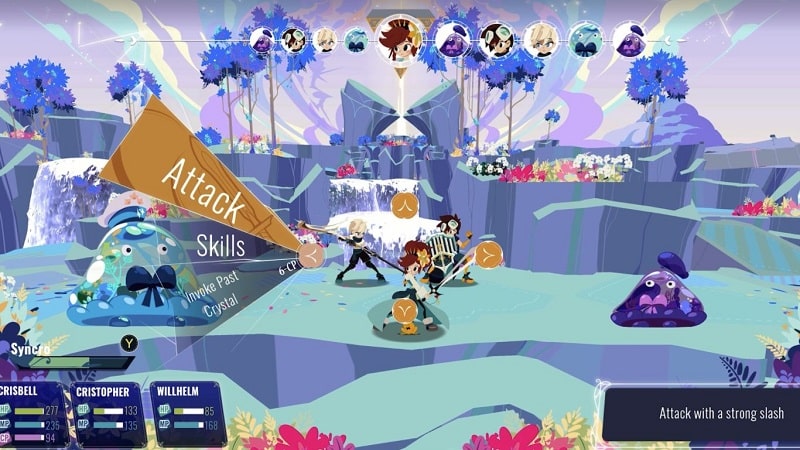 Though sharp looking and lacking no amount of anime style, the visuals in Cris Tales are simultaneously quite arresting and also quite plain. Character designs are attractive and the generous lashings of colour and sharp edges cut an impressive form overall, but the lack of surface detail and textures on much of the game world often times provides the impression of a patchwork world that is lacking in detail, rather than suffering from an overabundance of esoteric style.

The soundtrack and voice acting meanwhile are again pretty much what you would expect from other JRPG fare. Though largely fine for the most part, the quality of voice acting in Cris Tales tends to err far too often into overly exaggerated and dramatic territory. Thankfully I can happily report that the soundtrack fares much better, with an earhole-strokingly epic score that manages to oscillate between more twee strings and instrumentals to the sort of raucous, pulse-thumping orchestral battle anthems that one would expect to find in a contemporary JRPG.

Cris Tales then is a fine JRPG with a super innovative mechanic that is leveraged in a variety of interesting ways that genuinely make a lot of difference to how you play the game. The main issue, at least for this author, is that the character, places and lore that underpin Cris Tales world is less than memorable to say the least – veering far too closely to genre cliché rather than setting out on the same bold path that the tremendously entertaining time magic carves out elsewhere in this otherwise highly attractive JRPG offering.

Cris Tales is out now on PS4 and PS5.

An attractive JPRG with a hugely innovative central time manipulation mechanic, it seems as though the developers behind the game fell head over heels in love with that element of Cris Tales design at the expense of crafting a world with memorable characters, motivations, places and events. That said, Cris Tales non-linear story and neat use of time manipulation will still hold a fair amount of allure for genre newbies and stalwarts alike.