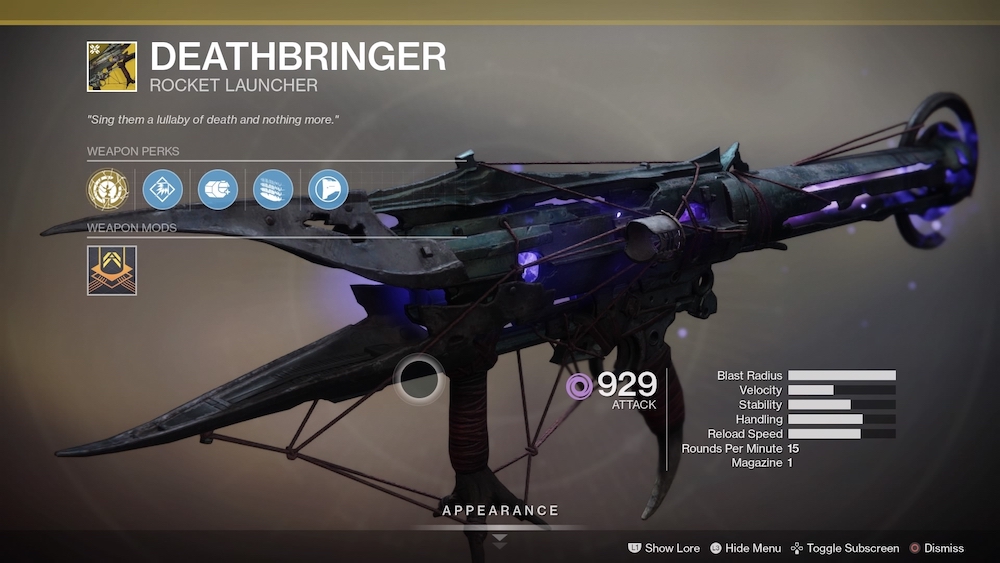 Deathbringer has become a fan favorite in Destiny since the moment it arrived. From its terrifying look to its unique projectile, Deathbringer is a force to be reckoned with. Deathbringer is a Void Warlock in a rocket launcher costume. A large void ball shoots out of the end of the weapon. Although this in itself doesn’t cause that much damage, it’s the seeking baby bombs emitted from the explosion that really steal the show. As long as you don’t let go of the trigger, you can choose when this projectile will explode. Pretty nifty indeed.

So without more hesitation, here is how you get Deathbringer.

Once you complete the campaign of Shadowkeep, you will be given a necklace from Eris. This necklace is an heirloom from her late friend, Sai Mota. However, the necklace is damaged and will need to be repaired in order to further your quest.

*Taken, and Vex do not count for these steps.

*If you can’t hear the enemies scream upon defeat, it won’t record. The larger the enemies, the longer the scream.

For the final step, you will need to defeat a Deathsinger named Ir Airâm. You will only have 45 seconds to defeat her. Normally, timed missions are incredibly difficult in Destiny. However, running high DPS weapons (shotguns, machine guns, and rocket launchers) will make quick work of them.

Deathbringer owns its name. From the moment you see it, you know it’s not something to be reckoned with. However, this isn’t the only new exotic introduced in Shadowkeep, and we will be bringing you guides on all of them, along with older weapons like Jötuun and Le Monarque that have received updates on how to acquire them as well. For all things Destiny related make sure you keep your eyes up to PSU, Guardians.