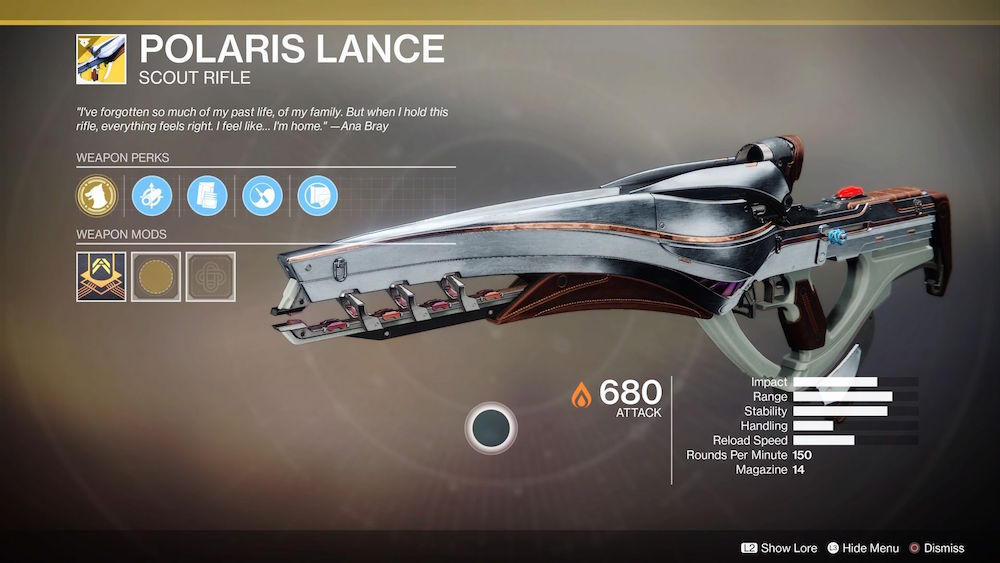 Polaris Lance was introduced in Destiny 2: Warmind. For a very long time, Polaris Lance was my favorite weapon in the game. This scout rifle is more of a highly explosive sniper rifle. Taking out spider walkers will never be easier, and using it in the Black Armory Bergusia Forge will be a great substitute to Whisper of the Worm. However, this is mostly because of the Whisper nerf, but that’s beside the point. Let’s get the Polaris Lance.

*After completing each step, you will be required to go back to Ana Bray to input them into her servers. Congratulations! you are now the owner of the Polaris Lance. However, like Legend of Acrius, you aren’t done with the quest even though you have the gun. Step 5 is still active to get the catalyst for this weapon, and it’s worth it.

Althjough MIDA Multi-Tool is the scout rifle of the Crucible, Polaris rules the PVE space for Scouts. With its explosive payload and bullet return, it’s hard to beat it. Below is a list of some more of our Exotic Quest along with the three exotics mentioned earlier, Whisper of the Worm, Legend of Acrius, and MIDA Multi-Tool.

For all things Destiny, keep your eyes up to PSU, Guardian.