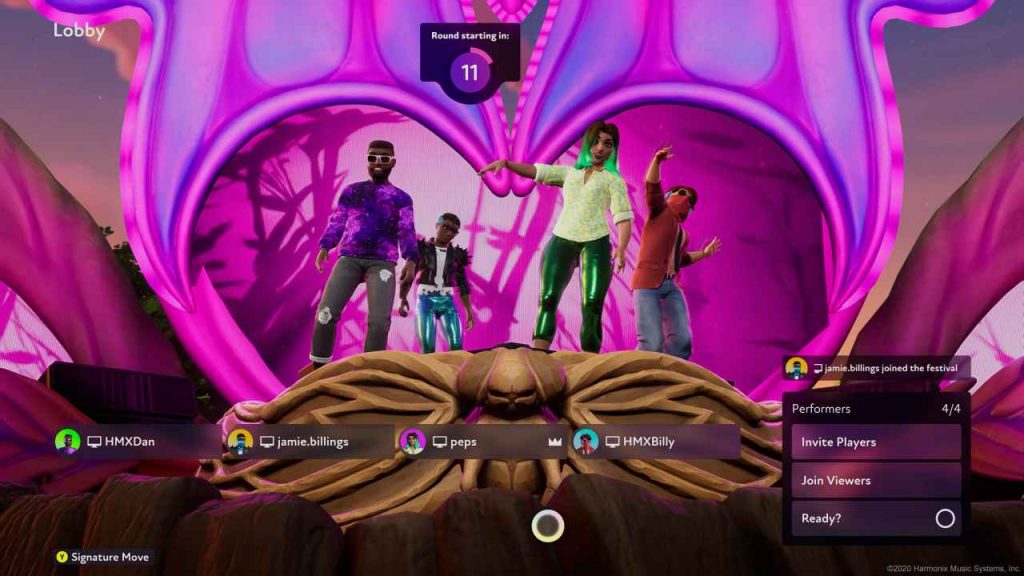 Fuser PS4 Preview – Now that Harmonix has announced a November 10 release date for their new DJ/mash-up simulator Fuser, more details are becoming available to the public. PlayStation Universe went live with Harmonix Project Director Daniel Sussman and Community Manager Zoe Schneider for a look at Fuser’s multiplayer gameplay and extensive social features. We also had the opportunity to take Fuser for another spin, and I’m pleased to report that with a bit of practice, my playstyle has progressed from “abysmal” to simply “poor”. Progress!

For those that missed our first preview, the best way to think of Fuser is as a DJ festival simulator. Players create a DJ from an extensive library of customization options and then start playing sets in front of an enormous (and very engaged) festival crowd. The final game will release with over 100 songs (the build we played this time had completely different songs from the first line up we saw).

Each song is divided up into four tracks – typically drums, bass, guitar, or vocal – though synths creep in where appropriate. Each of these four elements corresponds with the face buttons on a controller. By clicking the correct button, players can “lay down” tracks from any four songs, mixing them together as desired. Over the course of the game, more features unlock, allowing players to change the tempo and key of their tracks, and even create their own custom synth and drum loops to add to the mix.

Fuser is as deep as the ocean with options; in my new hands-on session, my brain was blown out of the back of my head when the character customizer randomly created a DJ character with vitiligo, yet another example of Harmonix’s commitment to inclusiveness in its character design. I promptly named him “DJ Plaid Pants”, and together we went on to stun the crowd with our steadfast commitment to include some aspect of Rick Astley’s Never Gonna Give You Up in every single mix we created.

Multiplayer in Fuser allows up to four players to “pass the mic” (or the turntables as the case may be) between them while performing for up to eight real-life spectators. Play starts when the first player creates a mix, adding in whatever elements they have brought to the table. The entire mix is then handed to the next player, who can supplement, augment, or completely obliterate the previous player’s creation.

The audience’s job is to vote on the things they like and critique the things that they do not. Much like Fuser’s single-player, audience members can make requests, asking the active players to place certain tracks or genres. These audience members will want to keep in mind that their requests shouldn’t be too demanding though; if a player drops out, the next audience member in line is thrown into the mix, allowing for a never-ending shuffle of collaboration and fun.

As the four players trade-off making changes to the mix, anyone playing or watching can grab a “snapshot” of the current mix at any time. This allows players to store an imprint of the current arrangement – including any custom created loops that happen to be playing. Players can then go back and reopen snapshots, to either enjoy them again or to “appropriate” sections that they enjoyed. If you like it, go ahead and steal a copy.

Snapshots can also be posted in Fuser’s Social Hub – a place to share interesting mixes and performances. Each player has access to a sort of social media simulator, which uses actual data from the game to promote popular performances. You can go see your friend’s mixes, then grab a snapshot from their recordings (if they are any good). There is a top panel that is actually curated by Harmonix – pulling the very best mixes to the forefront. The rest of the content in the social hub is supplied by an algorithm that feeds the hub with fun stuff your friends do.

All of this activity earns the player experience points, which in turn translates to in-game currency. This currency can be used to purchase cosmetics for your DJ, and to unlock songs to grow your crate of material to pull from.

I’ve Stepped Up My Fuser Game

Spending more time with Fuser, I’ve been able to improve my game a little bit. Since the last preview, I have gained a greater understanding of the controls and this has helped immensely with my timing. For the longest time, I was trying to drag tracks down from my crate onto my turntables – resulting in some truly horrible timing mishaps and failed performances; I’ve been booed off the stage more times than I’m comfortable sharing.

This time, I paid much closer attention to Fuser’s built-in tutorials and realized that I was royally messing up. It turns out that you simply have to time a button press to pop a track into place – no need to drag records around – which is much, much easier to time correctly. I haven’t exactly set the world on fire with my amazing skills, but I haven’t been bombing out of the first level anymore either.

I don’t want to give the impression that Fuser is overly difficult. There is a learning curve involved, but rhythm game fans ought to feel right at home with Fuser’s gameplay. It is accessible to new players, and of course, Freestyle mode is still openly available for newbies to practice their skills.

What is truly remarkable about Fuser is the way that it simulates the feeling of being at a giant show. During the COVID pandemic, the social aspects of being at live events have been sorely missed by me. To put it plainly, not going to live shows sucks. Dipping into Fuser to watch Zoe Schneider throw down some great tracks was enough to trigger that exciting feeling of watching a live performance. Harmonix is on to something great here with the social aspects of Fuser, and it will be remarkable to see how the community shakes out once the game goes live.

These newly revealed modes for Fuser look like a lot of fun, and Harmonix isn’t done making reveals yet. There are still a bunch more songs to be announced for the full release and possibly more game modes that we have not seen yet. And of course, we still haven’t seen a post-release content plan. It is safe to assume that Harmonix fans have a lot to look forward to in the next two months as Fuser approaches, and even more to get excited about once the game launches.