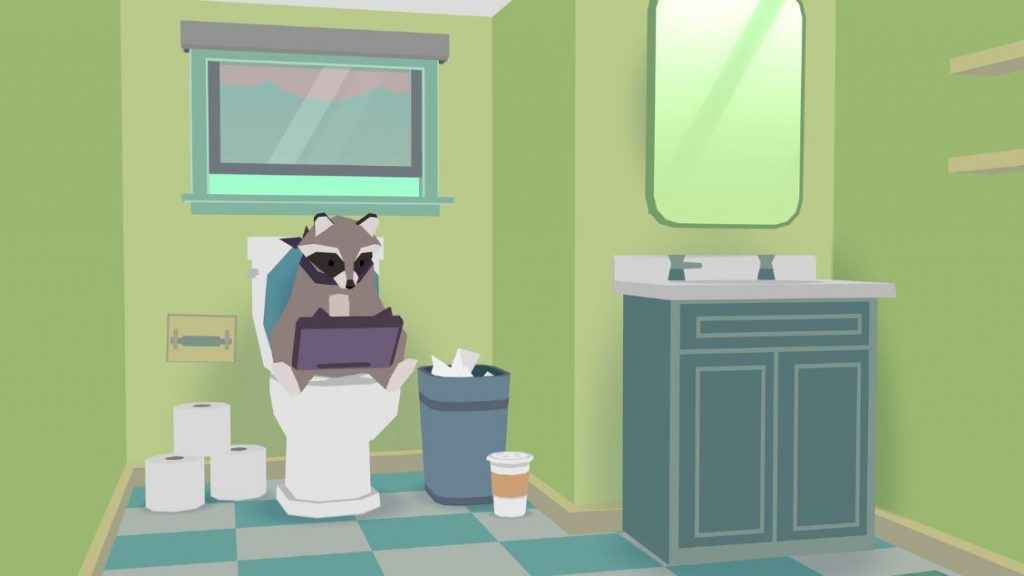 If you haven’t played charmingly offbeat and acerbically satirical puzzler Donut County, then you’re missing out.

One of the most intriguing PS4 titles released so far this year, we sat down with creator Ben Esposito to pick his brains about his influences, the message he’s trying to put across with Donut County and perhaps most importantly, why B.K. the raccoon is such an asshole.

PSU: How did the idea for Donut County come about? Was it spawned from a game jam or some kind of hallucinogenic powered epiphany?

Ben Esposito: It started at a game jam called Molyjam— we made games inspired by tweets by Peter Molydeux, a parody of the famed game designer Peter Molyneux. There was one idea where you play as a hole in the ground and I thought it was an intriguing idea. By the end of the jam I had a version of what would become Donut County.

PSU: How did your time on What Remains of Edith Finch and The Unfinished Swan affect the development of Donut County – if at all?

Ben Esposito: I learned a lot working with Ian Dallas and the team at Giant Sparrow for those two games. In particular I learned a lot of techniques for designing story-specific puzzles and challenges with no fail states. Pretty specific! On Edith Finch, I got to develop a number of playable prototypes for stories you play in the game. I contributed to some of the more playful physics-based stories and interactions (like the secret passages). I’m fortunate I got to sharpen my skills on such a cool project.

PSU: BK is a bit of an asshole, though somewhat redeemably lovable at times – was there any particular inspiration behind his creation?

Ben Esposito: I knew I wanted raccoons to be the lovable bad guys in Donut County after my experience with my first apartment in LA. We had a pretty serious raccoon problem, to the point where the raccoons would take over the laundry room and sleep in the warm laundry machines. They’d monitor us from the rooftops when we walked around at night. They stole my pool float. I don’t know where it is. In spite of their campaign of terror, I always thought they were really cute.

In personality, I wanted BK to be your problematic gamer friend. The one you sometimes have to mute on voice chat. I’m not saying who this is inspired by.

PSU: One of the strongest elements of Donut County are its physics based puzzles – what was the thought process behind constructing these?

Ben Esposito: I wanted every puzzle in Donut County to feel specific to the place and the character who lives in each level. In that way, the puzzles are more like adventure game puzzles than a traditional puzzle game. I tried to make each puzzle explore some aspect of the hole, and what might happen out of sight when you put something in.

Donut County is meant to be played by gamers of all ages, so I wanted to put the focus on playfulness and surprises without the fear of failing. It was a bit of a challenge designing scenarios where you can’t make any fatal mistakes, but I think it was worth it.

Lastly, I think the puzzle mechanics should be funny. That’s why you can get a snake stuck in the hole and use it to harass various animals.

PSU: Each of the levels tend to be fairly focussed, intimate affairs – was it because of this that you avoided making the stages massive, city-swallowing affairs like you’d get in Katamari Damacy, perhaps?

Ben Esposito: The levels in Donut County are focused on an intimate human scale because the game is really about places that people live and the objects that define those places. The stuff someone keeps around tends to say a lot about the way a person lives, and sometimes their approach to life in general. It was a fun challenge to build out levels that reflect the characters personalities and outlooks on life, so it made a lot of sense to keep the focus of the game on these intimate details.

PSU: Look, the soundtrack is basically amazing. Who was responsible for it and what were the influences which informed its creation?

Ben Esposito: Thanks!! I’m glad you liked it. The majority of the soundtrack is composed by my friend Daniel Koestner. Apart from being an excellent producer, he’s a PHD candidate in Oceanography.

Inspirations range from experimental folk rock to the textured beats of the LA beat scene circa 2010s. I love the way Daniel layers, loops, and warps his ukulele and baritone uke recordings. He builds his percussion out of a huge range of recordings, from drums in his studio all the way to recordings of him banging on pipes in a hotel.

I produced the remaining ¼ of the soundtrack. My tracks are all supposed to be music that raccoons in Donut County might listen to, so they draw from lofi house and lofi hiphop you might find on soundcloud, haha.

PSU: Donut County, especially towards the end, seems to meditate heavily on notions of capitalism, albeit in a fairly light way. With that in mind, what sort of message were you trying to get across (again, if any) with the game?

Ben Esposito: With the hole, I wanted to paint a picture of unconstrained consumption, haha. I wanted to explore what it would mean for a town to be erased by self-possessed nerds. When you look at it that way, gentrification is a good metaphor. I thought it would be interesting to explore a story where you’re complicit in a larger system that makes erasure fun and profitable.

PSU: Many thanks for your time Ben!

Donut County is out now on PS4. You can read our review of the game, here.