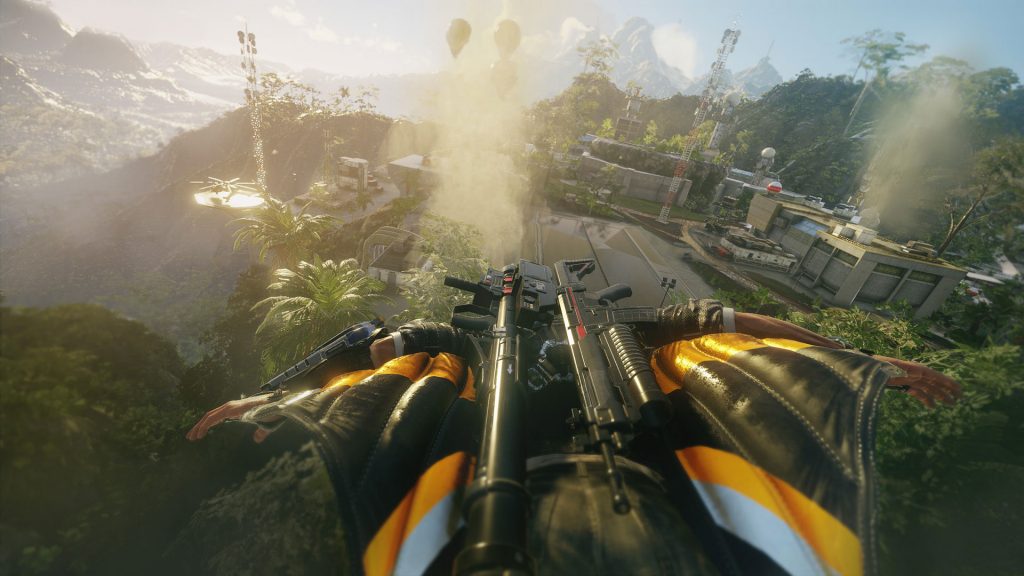 Amid the largely underwhelming trailer show-reel that was Square Enix's E3 2018 presentation, a couple of games stood out: Shadow of the Tomb Raider and Just Cause 4.

Shadow of the Tomb Raider offered fans a brief look at its jungle setting and stealth mechanics, the latter suggesting Taken protagonist Bryan Mills has been giving gaming doyenne Lara Croft lessons in how to murder faceless enemies with ruthless efficiency. More on that in a separate article we'll be publishing in the next few days.

Just Cause 4, meanwhile, provided plenty of juicy titbits during its three-and-a-half minutes of stage time. And, I have to say, it all sounds wonderfully chaotic and pulpy.

To begin with, Just Cause 4 features the biggest open world setting in the history of the series: namely, the fictional South American country of Solis, which just so happens to be suffering under the oppressive regime of paramilitary group the Black Hand and its leader Gabriella.

Neither Avalanche Studios nor Square Enix revealed the exact size in terms of square kilometres at this stage, however, given the size of Medici, I can't imagine the difference is particularly stark. Few things have the power to leech the enjoyment out of a sprawling, open world sandbox game than a content-poor environment, after all.

Anyway, having promised more quest variety than ever before, not to mention increased opportunities to create mayhem and explore the lush South American setting, that shouldn't be a problem for Just Cause 4. Dynamic weather events such as blizzards, sandstorms, and tornados powerful enough to uproot trees and level bridges, add a welcome dose of unpredictability to the world of Just Cause 4 - “taking destruction and physics simulation to a whole new level”, according to the trailer.

Elsewhere, vehicles and vehicle handling have been overhauled in an effort to provide additional gameplay opportunities, while Rico's signature grapple (which is now both more intuitive and fully customisable) has been augmented with extra tethers, MGSV-esque air lifters, and boosters. If you've ever wondered what would happen if you attached four Fulton balloons and two rear thruster rockets to a tank and set it on a crash course with a large spherical fuel reservoir, then good news: you're about to find out.

Just Cause 4: Improved Combat and AI

As exciting as all this sounds, for my money, the most significant news to come out of the presentation was the game's improved AI and deeper combat.

Enemies won't be the disposable grunts they were in Just Cause 3, from the sounds of it, presenting “a far more intelligent threat to Rico”, i.e., you won't find them standing clustered together out in the open waiting for their turn to eat a few bullets or charging headlong into Rico's red-hot LMG. Additionally, there will also be a greater variety of soldier types, from exosuit wearing brutes to lightly armoured, sometimes invisible scouts.