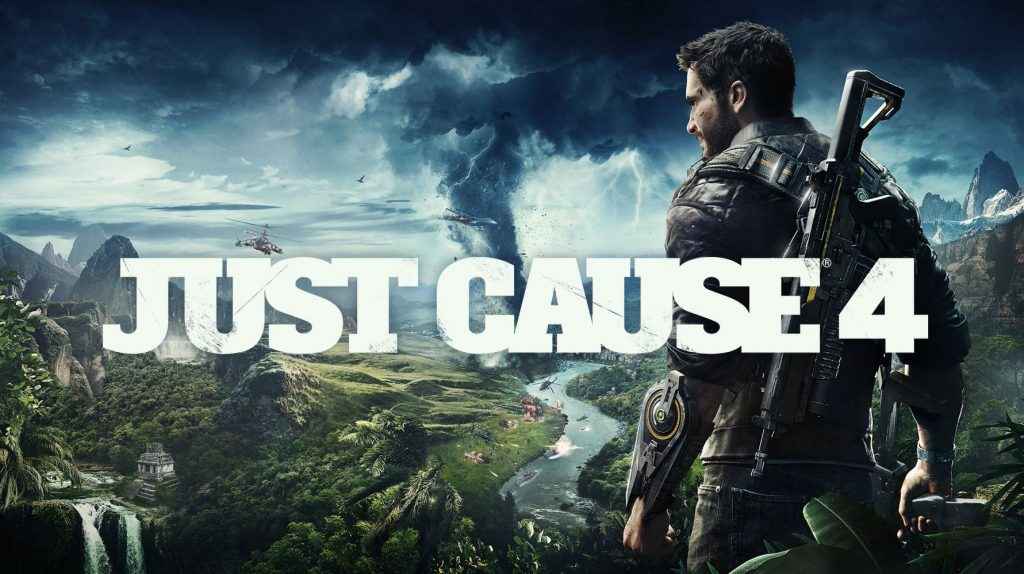 Just Cause is a series known for its crazy contraptions and ridiculous gameplay full of destruction and devastation. Just Cause 4 ups that destruction with the implementation of extreme weather events: a darkening sandstorm, a threatening blizzard, a deadly tropical storm, and a monstrous tornado. All of these create some incredible gameplay setpieces that I don’t think I will ever forget.

After 20 hours with the game, as the credits rolled, I was left marveling at the incredible, innovative moments Avalanche had managed to create. Yet, the time in-between those moments felt far too pedestrian.

Just Cause 4 Review – It’s A Traditional Just Cause Story

Just Cause 4 takes place after Just Cause 3 where Rico and his sidekick from that game, Mira, have traveled to the island of Solis to discover what Rico’s father had been working on before he died. That work manifested in the form of Project Illapa, a weather-based research and engineering project that can create and negate extreme weather. Unfortunately, Rico’s father never finished that project, leaving it to fall into the hands of Oscar Espinosa.

He is effectively the de-facto ruler of Solis, with a private military corporation behind him, known as The Black Hand. Now running Project Illapa, Espinosa uses it to unleash harmful and deadly weather events onto the people on the island. Over the course of the game, you attempt to stop the Project and learn why Rico’s father would make such a deadly weapon. Just Cause’s narrative has never been a strength of the series and Just Cause 4 is no different. At its best moments, it is passable, with likable characters and some funny dialogue, such as when one character yelled “AHHHHH” over the radio before quickly following it up with “Coffee was too hot.” At its worst moments, it is bland and utterly uninspired, feeling providing a plot a six-year-old could have come up with.

There isn’t any consistency with these peaks and troughs either. The opening and conclusion of the game are great; however, the character development in-between was mostly non-existent. Everyone stayed the same throughout the game. I especially had an issue with one character who just disappears after the final mission with no hint as to where she went or what she is now doing, despite her having ties to some key characters within the game.

Rico has a slight character arc that intrigues due to Project Illapa being a personal matter for him. Throughout the game, he uses a more thoughtful mindset, asks some interesting questions, and overall felt more developed as the game progressed. His “let’s blow everything up” mentality is not gone though. Frequently he decides to take a less traditional route to solve a problem, creating some enjoyable character moments and some amazing gameplay moments. Gameplay moments are where Just Cause 4 shines, particularly when it involves the aforementioned extreme weather events. These four events are always somewhere in Just Cause 4’s Open World. One minute I was driving through the foliage-filled hills, the next I found myself darting and dodging lightning strikes as they struck the ground with a thunderous crack. This allowed me to experiment with how these weather events interact with the environment built within the brand new Apex Engine.

For example, you can attach yourself to a car and drive into a tornado, clinging on as you are twisted up, down, and around along with various other objects in the environment, from tiny guns to massive jumbo jets. Or, grapple from building to building trying to find an escape from the claustrophobic and congested sandstorm. These moments allow you to make use of all your tools to create some of the most interesting contraptions and situations. But, Avalanche has also created some outstanding moments in the main campaign that make full use of these weather events. Each weather event is utilized in a few story missions. My favorite was the tropical storm, where darting across an industrial factory as lightning struck trees and buildings around me felt incredible. It was a lot of fun, albeit stressful as I dodged left and right while wingsuiting in order to reach the next objective.

The music here was particularly memorable as the vivid electronic synthesizer made me feel as if I was in a Hollywood action movie, escaping from my enemy. This synthesized music pops up a few more times and feels just as awesome as the first.

The tornado-based story missions were also a highlight. These ones created some stunning visual setpieces. As I flew across an airstrip, to my left I saw planes, crates, people, cars, and a whole lot more get lifted into the air by this threatening menace. Watching as those objects dynamically flung out of the Tornado hitting the ground and landscape was as awe-inspiring as it was threatening.

These moments felt like I was a child again, seeing something I had never seen before. The scale of these weather events and the way they interacted with the environment absolutely baffled me. It felt like nothing I had ever seen before in a videogame. I would say these setpieces and the weather alone is worth your time. They are a marvel to look at and also mad and chaotic fun. The island of Solis is far more interesting and enjoyable to explore than Medici was in Just Cause 3. Solis is comprised of four different biomes that offer a lot of visual diversity. Surrounding the snowy mountains in the middle of the map is a desert, flat, rolling countryside, and a rainforest. Each biome hosts one of the weather events. Gameplay variety between these areas is almost non-existent, beyond those weather events. However, the change in color and atmosphere helps things stay fresh and interesting, even 15 hours in.

Solis is also enjoyable to traverse and interact with. Wingsuiting feels great and pulling myself just over a hill, narrowly missing the ground to find a beautiful view over the edge was immensely satisfying. The addition of wind currents also gave me more control over Rico and what he can do whilst in the air. Rico can interact with the world more as well. His Retractor and Boosters return from Just Cause 3 allowing you to pull objects together and launch things off into the distance. A new addition is the Air Lifters which allow you to attach small balloons to objects in the world and lift them off the ground and into the air. I made use of this quite a bit, as I would leave my enemies hanging from an Air Lifter, incapacitated and awaiting their death. These can all be combined to create crazy contraptions and scenarios, like riding a flying tank across the desert.

That is only emphasized when you unlock the mods for each device. All three now come with equippable mods that change how that device works or give it an extra effect, such as creating a giant pulse of electric energy as two objects collide with a Retractor. Those mods are unlocked by three separate questlines tied to some of the side characters in the game. Two of them were cool and enjoyable whilst the other was good but not very memorable. Discovering a lost hidden bloodline on the island and creating wacky and dangerous movie scenes with a film director were a lot of fun. However, helping out an army and building up their forces, fell into a loop of repeating similar missions with not very engaging gameplay.

Unfortunately, that last point extends to most of the other activities you can do in Just Cause 4. Specific locations house stunts which are one of three types repeated hundreds of times. On top of that, each region of the map cannot be unlocked until you complete a Strike in said region. This involves entering a Black Hand facility and completing some kind of task. Early on, there is enough variety to make these missions engaging and interesting. However, at the game’s midpoint, I had seen all of the mission types and was repeating them for the third or fourth time.

Knowing that I still had half the map to unlock, whilst playing the same missions was not encouraging me to grind through the map and unlock everything. Strikes are not short endeavors either, they could take anywhere from ten minutes to half an hour, depending on the mission type and difficulty. There are thirty-one of these in the game, and, to be frank, by number fifteen I was bored or frustrated. Some of these missions also expose another floor with Just Cause 4’s mission design. They revolve far too much on outdated or poor mechanics. Escort missions and ‘defend this area for a few minutes’ missions are incredibly prevalent and used at some point in every activity. These are not fun gameplay mechanics and they lack the spectacle and excitement found in the main story missions. They do not make use of the weather effects and they do not take advantage of Rico’s arsenal and tools. Just Cause 4 is not a pretty looking game in terms of graphical fidelity. Running on a regular PS4, buildings and character models look unsightly and unappealing. Textures are low quality and the pop in of these assets, including trees is very noticeable. Especially when flying across the countryside, you will consistently notice trees appearing in the distance and cars disappearing as they drive away.

The game is then made even uglier by the extended use of motion blur throughout the game. It is particularly egregious when driving as the whole world looks hazy and fuzzy. With no way to turn it off, it made me a little queasy at times and was plainly an annoyance. Character models are also disappointingly poor. Something about the way everyone looks seems incredibly offputting. Hair doesn’t look right and can often appear really shiny as if light from the world is reflecting off of it. Some character’s faces also just look like they belong in a game from ten years ago. They do not look like people and are far too rigid and stiff.

Just Cause 4 can also suffer from frame drops. Surprisingly, this did not happen too often, with the only major frame drops coming when driving amongst a lot of fighting and when interacting with the Tornado. The Tornado, in particular, can slow the game to a crawl, due to the sheer amount of interactivity it has with the world and how much is going on at once.

The final technical issue and the most annoying was that characters would often stop following their objective, standing still, doing nothing. This then forced me to restart the checkpoint, being set back. This didn’t happen every time, but it happened enough that I quickly grew frustrated by it. Just Cause 4 is a mixed bag. Its highs are incredibly impressive and memorable. Avalanche’s implementation of extreme dynamic weather events creates some monumental fun as the electronic soundtrack thumps and pounds, evoking the feeling of being a superhero. However, a lot of the scars from Just Cause 3 have not healed. Mission design feels outdated, the game does not run particularly well, and side content is largely forgettable. Just Cause 4 offers a solid ten to fifteen-hour campaign with some great setpieces. In short, Avalanche innovated and improved everywhere but where it was most needed.

Just Cause 4 is an enjoyable ride with a memorable and exciting campaign, full of thrilling gameplay moments. However, the rest of the game is a compilation of outdated mission design and poor technical performance. My advice: stick to the campaign for a fun fifteen hours and forget about everything else.