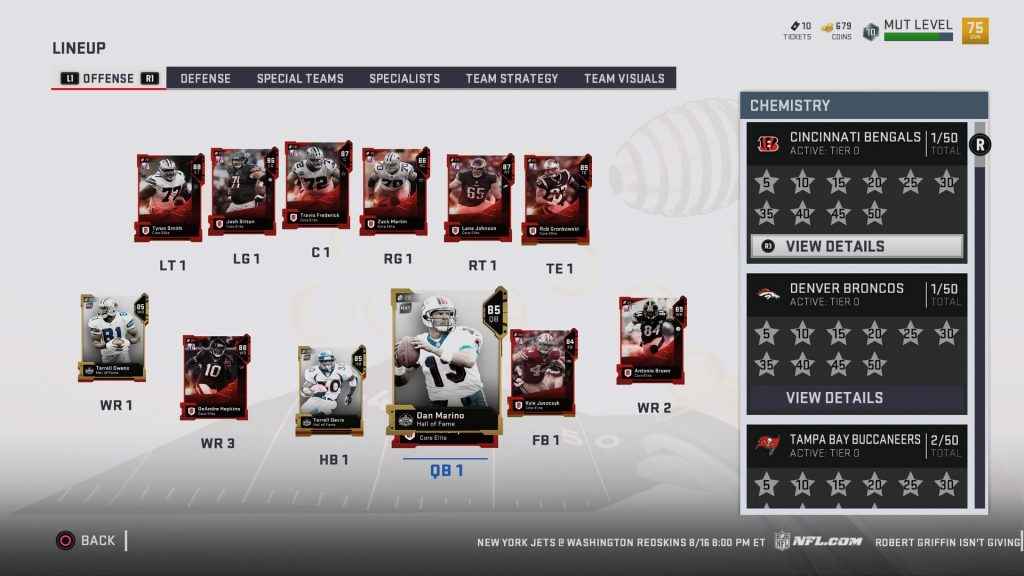 Every sports game has its own form of Ultimate Team, and Madden is no different. MUT has been around for a fair few years now, but it is an ever-changing mode that keeps getting more and more involved with each installment.

Here, I hope to give newcomers a way to approach this game mode and make the best team through proper fundamentals. As fans of the sport know, football is nothing without fundamentals.

One of the most important aspects to developing your Ultimate Team lies in leveling your cards. In order to do so, you will need Training Points, or those little purple dots at the top of each of the screens provided here.

With these, you can apply certain changes to most cards, and some more rare cards can be leveled up with them. Not all cards are created equally, however, but each card has its own way it can be customized. In fact, most of the cards you pull will be like this Jimmy Graham card shown below. While this Graham card is rare and has good stats, it has limited customization. You won’t be able to enhance the individual stats of this card, but you can customize the type of Chemistry he’s equipped with.

In very simplified terms, Chemistry determines how well your players work together. What is great about having Chemistry on your team is that your team doesn’t have to be stacked to be formitable. In fact, a 70 overall team with 30 players in the same Chemistry have the ability to contend quite well against teams with higher overall numbers. This is not to say that this figurative team could take on a 99 overall team, but you would be hard-pressed to find a team that’s 99 overall anyway, especially this soon after launch. The team shown above, a team created for solo challenges, has no Chemistry while having greater overall numbers. Even with good team Chemistry, it will be a challenging opponent, but with some smart game management your starter team has the potential to overtake it. All you have to do is make sure to set up your team Chemistry first. As mentioned above, some cards allow more customization, such as this Patrick Peterson card. These are Power Up cards. With enough points, you can unlock tiers of different stat increases and even adjust his Chemistry to very unique types that other cards cannot obtain. This makes Power Up cards game-changers. They are quite rare, so don’t be surprised if you don’t see one for a little bit.

On that note, I would like to make one suggestion. While I won’t necessarily support monetized aspects in these games, there are some good ways to get cards without spending a great deal of money. As seen below, Madden 19 offers some special packs everyone once in a while that include some great cards at discounted rates, such as this Elite Fantasy Pack. The currency required can only be purchased with real money, but 150 equates to 1USD. Since packs like this are limited, you’re not out much and you’re not going to be coaxed into buying a ton of them, especially since most of the other packs are so overpriced. Another great way to get in-game coins (as well as Training Points) is to go through the solo challenges. For each one completed, you’re rewarded with free cards on top of other rewards, adding to your binder of available cards. Clearing out these challenges can take some time, but they’re generally quick, and returns are quite generous.

My final suggestion is to not be afraid to sell your lower rank cards. There are ways to make good money through selling good cards through auctions, but I’d recommend waiting on that until you get your bearings on the game mode as a whole first. For now, just take any cards with very low stats and quicksell them for extra coins and Training points. Don’t go too crazy with them, because you still need a full team. If you’re not sure on a card, just keep it. It’s always best to play it safe in the early goings.

There’s still a great deal to the game mode, including its different ways to compete against other MUT players, but for now, stick to the grind and get your team up and running through strong fundamentals. That makes for efficient football all around.