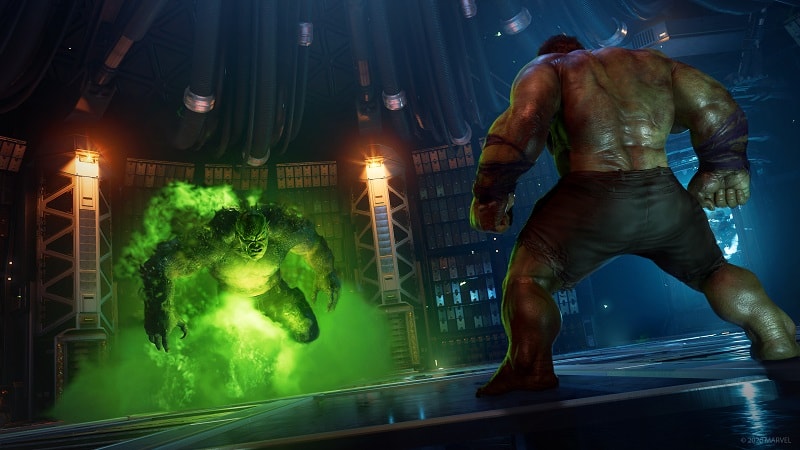 Marvel’s Avengers PS4 Closed Beta Impressions – After nearly ten hours with the Marvel’s Avengers PS4 closed beta, I have to say that I’m certainly rather impressed overall with what Square-Enix and Crystal Dynamics appear to be doing here and certainly, fans of both these comic book and silver screen superheroes will find much to love here. Arguably though, nowhere is this slavish adherence to its audience more obvious than in the opening act.

Disguising a series of tutorials as a spectacle stuffed opening act, the beta sees players taking control of Iron Man, Thor, Captain America, The Hulk and Black Widow in a bombastic battle that looks like it was pulled kicking and screaming from the latest MCU blockbuster. A cacophony of comic book destruction in which our trusty team of heroes must prevent longtime Marvel villain Taskmaster from doing a whole bunch of nefarious stuff to San Francisco and the surrounding area, it’s certainly true that the Marvel’s Avengers beta wastes no time putting its best foot forward.

This bombastic and cinematic approach to the Avenger’s license segues into the game proper too, as straight after the battle of the Golden Gate Bridge players soon take control of Ms. Marvel and The Hulk as they attempt to liberate the Hellicarrier from the villainous forces of AIM. Oh, and The Hulk gets to fight his longtime rival Abomination in a stunning scrap too that spares no expense in evoking the awesome death struggle of these two titans in 2008’s The Incredible Hulk.

It’s when the dust settles on this furious opening act that Marvel’s Avengers begins to settle in and embrace its GAAS design bedrock much more directly and openly. Once the Avengers Hellicarrier has been reclaimed after the beta’s two single-player missions have been completed, players can then choose to embark on a number of Warzone missions – either with other players or with AI driven bots to fill up the ranks.

What’s interesting here is that some of these missions still remain character driven and so the heroes you can pick from are understandably limited. This means that some missions which tie into the story of the Hulk and Ms. Marvel will only allow you to play as those characters, while the more generic (and dare I say it, grindy) War Zone missions permit players to take up the mantle as any one of Earth’s Mightiest Heroes.

In these War Zone missions the remit appears to be straightforward – you rock up to an area, destroy all the enemies, wreck some equipment, beat a big baddie and that’s pretty much it. Some additional variety exists by virtue of tasks which require our heroes to ‘capture’ hacking points by standing in a specified area for a period of time, but otherwise, on the evidence of the beta at least, there isn’t a whole load of variety in what the player is asked to do.

Speaking of a lack of variety, though again this could very well be to the limited sample of content that the beta provides, but far too many missions are spent underground in a nondescript lab or overground in some dreary forest. Both of which are a far cry from the incredible city setting that the opening act assaults the player’s senses with. Here’s hoping then that the finished game has a much wider (and more epic) range of locales for our heroes to battle across as these heroes need to have settings that are as epic as they are.

Faring much better though, at least on the evidence of this beta, are the boss fights that you’ll be getting stuck into. Multi-tiered encounters that go on well in excess of ten minutes, these titanic encounters are a lot of fun to play and really feel like a satisfying team effort as everyone pulls together and uses their character roles to maximum effect in order to succeed.

Happily, I can report that actually playing as each hero is a total blast and provides a robust bedrock for the series to build upon. With each character having a multitude of skill trees in tandem with a massive amount of collectible gear that accentuates different stats and abilities, there is more than ample latitude for players to develop their own role-based builds as they approach what will be Marvel’s Avengers endgame (no pun intended) in the final game.

In this sense and though it technically exists in a different genre, Marvel’s Avengers plays similarly to a title like Destiny where each character can build up special and ultimate abilities that deal massive damage, buff their abilities or help other party members out. For example, Black Widow’s veil ability allows her to not only make herself invisible, but other players too resulting in a reduced chance for enemies to land a clean hit. Simply just playing as these iconic heroes is a roundly satisfying endeavor in its own right too.

As Iron Man for example, players can mix it up by fighting on foot with melee and repulsor blasts, hover-strafe around the battlefield and even full-on fly around the battle in a manner that doesn’t feel too divorced from EA’s Anthem (a good thing – as arguably the best thing about that game was how it made you feel like Iron Man, ironically). Gleefully, I can also report that playing as the Hulk feels completely different, as one might expect. A massive, thundering engine of violence, Bruce Banner’s angry alter ego can leap insane distances, charge at great speed and soak up damage like a Dark Souls boss on steroids. He’s a *lot* of fun to play.

On the flip-side, in combat Captain America feels much more akin to Batman from the Arkham games, with an emphasis placed on generating attack combos and performing counterattacks that will be familiar to anyone who has indulged in the Rocksteady developed DC superhero efforts. Neatly, players will also recognize many of Captain America’s throws and takedowns from the superb Captain America: The Winter Soldier as well, while his ultimate ability which allows him to throw his iconic shield at a rebound trajectory will surely delight fans too.

While the game is visually stunning with alternate renditions on characters that we know and love which crib from both the pages of the comic book and film frames of the silver screen respectively, there are definite cracks showing in the beta. Even running on performance mode on PS4 Pro, Marvel’s Avengers struggles mightily during busy battles – especially if the player is playing as The Hulk, whose screen shattering attacks and extremely long and high leaps arguably tax Sony’s ageing current generation console hardware quite harshly.

As it is then, Marvel’s Avengers certainly shows promise and fans of the source material will likely tie themselves up in excited knots over how closely it sticks to the characters and storylines that we know and love, but Crystal Dynamics need to make the settings feel as epic as the characters themselves. After all, there’s only so many times you can traipse around the same underground lab or jungle setting before things begin to grate.

Assuming Crystal Dynamics can address the framerate issues and increase the variety of missions while doubling down on the epic spectacle that Earth’s Mightiest Heroes are known for, then fans of the source material and deep action titles could well discover something of a gem when Marvel’s Avengers releases on PS4 next month. Look for our full review soon.