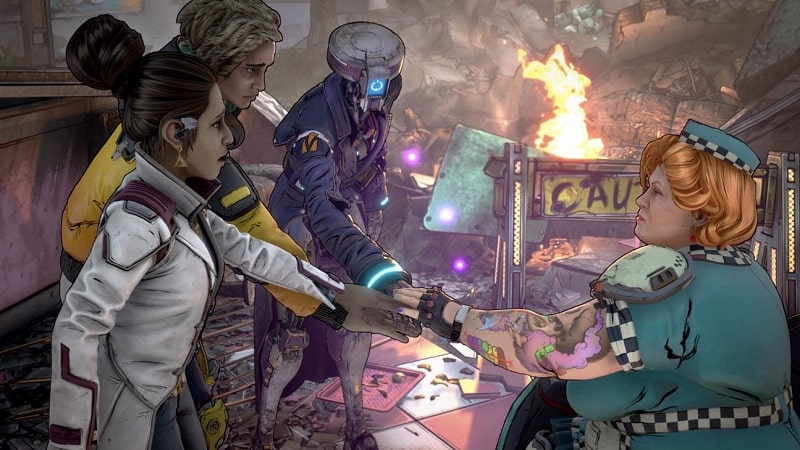 There’s probably no Telltale Games effort as tough to follow as Tales From the Borderlands. Without a doubt, it is that studio’s most consistently entertaining piece of work, and instilled with even quicker wit and sharper tongue than the series it spun off from. Alas, Telltale as it was has folded, so we’ll never know what kind of follow-up it would have made. Still, that’s not stopping Gearbox from giving it a go itself.

With the help of some ex-Telltale talent, Gearbox Quebec brings us New Tales From the Borderlands, an entirely new standalone story set in the most chaotic universe around. It brings a trio of new protagonists, each with their own personal goals, and puts them up against a multi-headed task of gargantuan, and sometimes ridiculous, proportions. 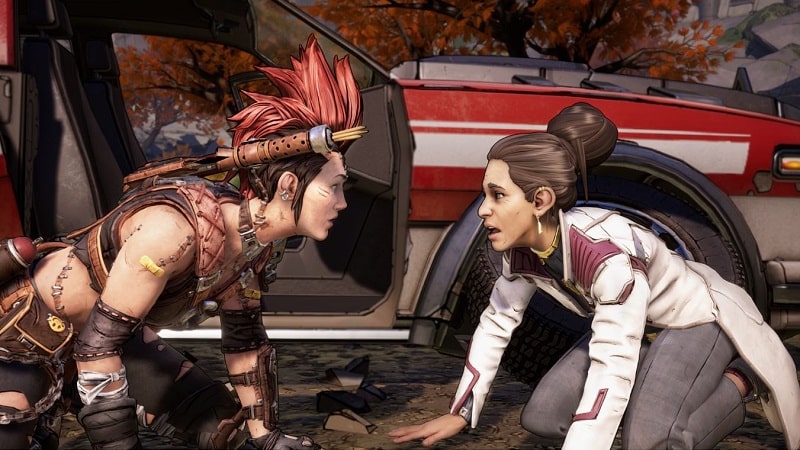 The story is set in the metropolis of Promethea, a place constantly bombarded by war, leaving its least fortunate populace dreaming of a brighter day. Three such Prometheans are the focus of New Tales of the Borderlands – wannabe Vault Hunters without a lick of experience, but plenty of reason to risk their lives in search of legendary loot.

There’s Anu, a scientist for the Tediore corporation who abhors violence and finds witnessing it to be highly stressful, which is probably not the best problem to have in a place that thrives on it. Her bother Octavio is a little more easy-going. Well, in fact, he’s a bit of a loveable idiot, concocting hare-brained schemes to get rich. And then there’s Fran, a tough-as-nails store owner with a score to settle after being paralyzed from the waist down by a nasty piece of work.

I wondered if the choice of a team of protagonists reflected the mainline games’ co-op nature, a sense of camaraderie amongst a ragtag group. Head of Writing Lin Joyce agreed it was certainly one factor among others. 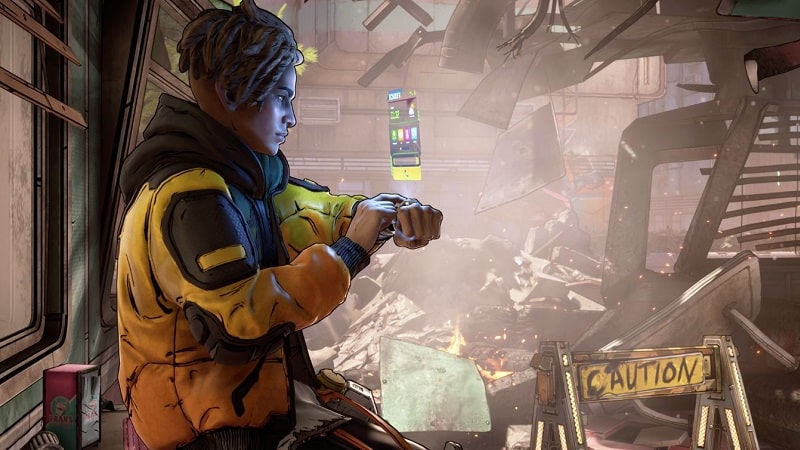 They form an unlikely group of amateur Vault Hunters when they learn of the location of an unsealed vault. That’s where our look at the game starts, as Fran reveals a secret sewer tunnel under her frogurt shop that might well lead to the said vault. As they walk through the dank underground passage, Octavio has a phone chat with his good friend/acquaintance Paco where he reveals that Tediore are tracking them thanks to a bug Paco planted on Octavio (in case he ever needed to kill him one day) and a choice option comes up for Octavio to respond.

Each response in this exchange is a different joke (the reply selected here was Octavio fluffing military call sign lingo). Here it was pointed out that the Telltale character emotion hint system has been scrubbed for more robust use of performance capture that conveys subtler emotions in even the most trivial of choices. So no more ‘BlahBlah Will Remember That’. In the brief time I saw the game in action, facial animations definitely put across more emotion.

Soon after, they encounter Tediore soldiers and plan how to get past them to reach the vault first.

Fran suggests a silent but very deadly approach, while Octavio believes a sneakier, passive strategy would be preferable. As Anu, the choice is there, and the New Tales From the Borderlands team walked and talked me through some of the scenarios that could arise from this choice. In the first run, Anu picks Fran’s plan, and Fran sneaks up behind the guard with a mechanical arm ready to crush their windpipe. Suddenly a QTE appears and is fumbled, causing Fran to be seen and ventilated at close range. Game Over.

The game’s producer, Frédéric Scheubel took a beat to explain how QTEs will work in New Tales From the Borderlands. As with labelmate The Quarry, you won’t have to complete every QTE to continue the story, and in failing some, the story can take new branching paths. Also similar is the level of accessibility in the feature. They can be made as complex and quick as you like or slow and easy as you wish. It’s a much more expansive structure to things on show already, and hopefully, that helps push it into the same stratosphere as its spiritual predecessor.

So a second run was then shown with Anu picking Octavio’s plan. It turns out his wasn’t any more sensible, but it certainly showed a funnier outcome. Octavio’s strategy starts off well enough as he throws a rock to distract a soldier. The next obstacle is a little tougher so Octavio decides hiding in a box to slip past is the way. Yes, a Metal Gear joke as his flawed logic sees him very easily seen crouch walking in an ammo box. It looks like another grim end, but wait! Things get strange. 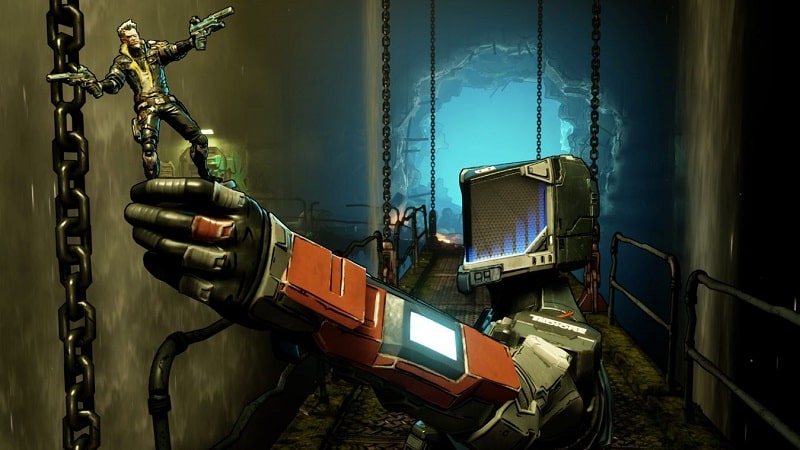 The soldier notices a Vaultlanders (Borderlands’ in-universe tabletop game) figurine that Octavio has dropped and as an avid player/collector, he’s very keen on obtaining this for himself. He won’t just take it though, he insists that Octavio battle him…in Vaultlanders. What follows is a skirmish of plastic as a beat em’ up minigame begins where they smash the figures together. It’s a fun gag (born from a bit in the script), but if you think it’ll get old quickly, you’ll be able to skip these battles when they crop up after this one. There are collectible figurines to be obtained though.

Victorious in combat, the group discovers some more soldiers trying a vault key aimlessly until they eventually manage to find the actual door. Now it’s a race to claim the vault first, or by any means. Unfortunately, the vault isn’t the cakewalk they’d all hope it would be. Robotic Eridian warriors make short work of the Tediore battalion while the gang cowers in the shadows.

Further Reading – Tales from the Borderlands Season One Review

Seeing an opportunity, they make a run for it, and Fran uses that mechanical arm to block the way behind them. Seemingly stuck, Octavio calls upon the help of his acquaintance Paco’s pet Ratch Juniper, a tunnelling rat-like creature. With Juniper’s help, they’re able to sneak around safely to the vault portal and the presentation ends just as they step into its shimmery glow.

It’s a brief slice of what could be, but New Tales From the Borderlands shows promise. I asked Lin Joyce if the mission statement had been to make this a far more interactive experience than before and the response was a positive one, citing the need to make this stand as its own thing as much as a successor. So far, it appears to be succeeding.

You can catch the all-new gameplay trailer for New Tales from the Borderlands below: