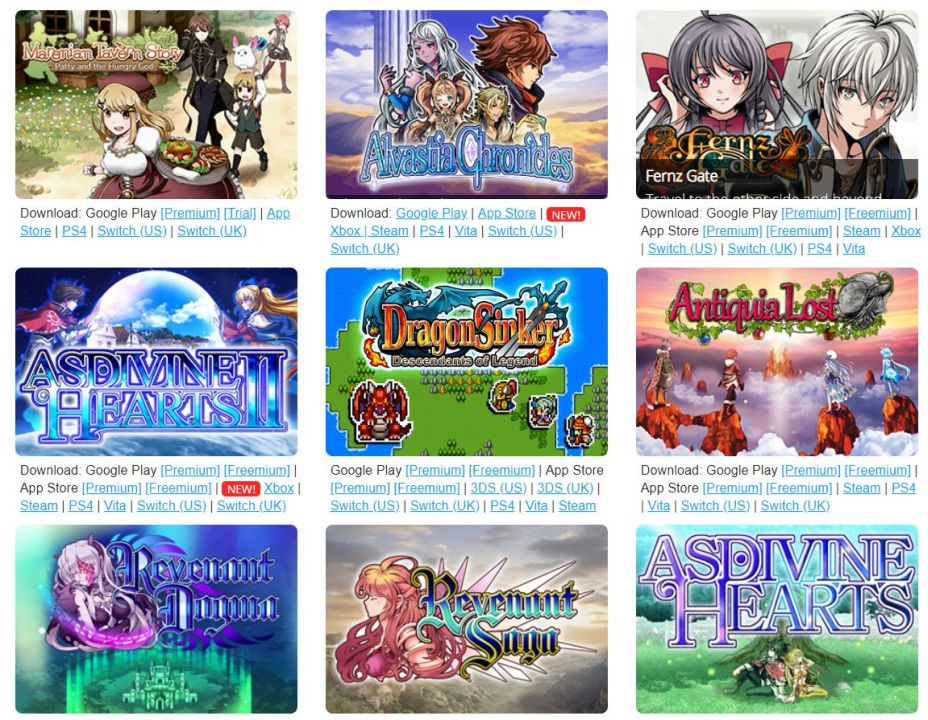 A few months ago, I got the idea to start a couple of weekly columns for PlayStation Universe sharing the upcoming releases for the week, specifically for PlayStation VR and PlayStation Vita. With these systems having smaller install bases, I felt that fans of these devices might enjoy seeing some content catering specifically to them, calling out the cool new games that are scheduled for release each week.

This is what brought Kemco’s RPG games to my attention. It seemed that every other week, I was researching a new release from Kemco, a company I had assumed was strictly creating mobile micro-transaction laden nonsense.

Researching Vita and PS VR games can be tough. These games are often developed by tiny companies with little or no online presence. Not so with Kemco’s RPG releases. These little games cast an enormous net over the entire gaming industry, and Kemco seems determined to port every single game they release onto every possible platform available. Googling the name of a Kemco game brings up a myriad of information, from press releases to iOS reviews.

Kemco Games is unabashed about sharing the fact that they crank out their JRPGs with machine-like regularity. “We pride ourselves on firm game development which realizes new releases in a short span on a variety of platforms,” the Kemco website says. “We at Kemco are always on the lookout for potential new markets for our extensive range of JRPGs, welcoming any suggestions regarding new markets or hardware platforms which will allow us to reach even more potential JRPG fans.”

In other words, “We make a ton of games, and we are willing and able to put them on any device with a chip capable of running them.” (This is my interpretation of their statement; they didn’t actually say this).

I started wondering about these games a couple of weeks ago when writing up my weekly Vita column. Three games have released from Kemco in the last month or so, and while researching them I was surprised to find some fairly favorable reviews on other outlets from when the little RPGs were released on other platforms. Examining the screenshots and trailers, I thought that the games actually looked fairly professionally made.

Due to the down and dirty speed with which Kemco admittedly produces their games, I had assumed that most of these products were shovel-ware. But the more I looked at the recent Kemco releases, the more I was tempted to give one of them a try. Also, almost all of the Kemco games released on Vita are part of the Cross-Buy program, which always seems like a good deal to me.

Outside of the somewhat generic-looking anime characters used in the cover-art and cut scenes, these games actually looked decent. I am a huge JRPG fan, and I have a massive soft spot for 16-bit era RPG games. The look and feel of these Kemco games echoed that of some of my most-loved games. My nostalgia alarm was quietly buzzing for several weeks, and I finally decided to take the plunge.

2018’s Fernz Gate was on sale for $10, so I decided to sate my raging curiosity and see what was going on with Kemco Games. I spent about six hours with Fernz Gate over last weekend, and I was happily pleased with how engaging this budget JRPG actually is.

Fernz Gate has a boilerplate story, but an enjoyable one. The game wastes zero time getting right to the heart of the matter, with the world building and plot established in the first three minutes of the game. You boot the game up, your main character wakes up in the woods, and another character immediately shows up and essentially says “Okay, here’s the deal.”

The “deal” is this: You play as a teenager that awakens after being inexplicably transported to a mysterious world. He does not have amnesia, which is lovely. It turns out that everyone in this world has arrived the same way, just popped into being there, ripped from their respective realities. All of these random arrivals seem to be making the best of it, happily establishing a makeshift society and living in peace until a mysterious “Goddess” deems them individually worthy and sends them back home.

But one day an evil bastard pops into the happy world (presumably from a world of evil bastards). He immediately stirs up conflict, encouraging the strong-willed among the immigrants to rebel against him. The evil bastard feels that the more powerful his opponents are, the more satisfying it is to eat their mana (or something).

And that’s it. The player character is a weakling and a coward who nonetheless rallies to the cause against the bad guy. Much is made of how he is striving to overcome his fear of battle, as he is from a peaceful world and is generally unfit for combat. Before long, our hero has gathered a party of homies and is wandering dungeons, leveling up, and grabbing sweet loot.

It is clear that the protagonist and his party are on a collision course with the big bad, but I’m not in any hurry to get there. Instead, I’ve been taking advantage of the game’s overly forgiving systems in order to create a party of immortal superheroes. Due to my excessive grinding and cheerful willingness to cheese certain systems, my guys are seriously overpowered for where I am in the story. Everybody is basically able to one-shot any enemy that comes their way, including bosses.

Despite providing the ability to make the game far too easy, Fernz Gate has surprisingly deep mechanics, including a fun and original support-based battle system. Characters are paired off into teams of two. If there aren’t enough characters to team up, the leftovers get teamed with “buddies” – anthropomorphic plants and animals that assist in battle.

When teamed up, the character in the front position can attack, but can’t use items. The character in the back is in a support position, using items or adding their strength to the attack. The system is surprisingly intuitive and effective. Players equip rings that give them magic, and the more you use a spell or skill, the stronger it gets.

In addition to the battle system, there are a number of sub-systems that slowly come online as the game merrily rolls through its opening hours. Players can plant seeds to produce fruit that grants permanent stat increases. I’ve amused myself by feeding all of this fruit to a single character, effectively making her into an indestructible god that towers above all others.

There is also a fun system that allows you to take stats from your old weapons and combine them into your new stuff when you are ready to upgrade. In fact, the number of original ideas present in this little game is kind of staggering. I’m not saying that the game is revolutionary or anything, but it is far more original and entertaining than I expected.

Of course, having originated in the mobile space, there is a bit of wonkiness in Fernz Gate that carries over. There is a gambling-style minigame that players can use to gain high-end weapons and buddies in exchange for gems and tickets.

I honestly don’t know if Fernz Gate allows for microtransactions, because after playing the minigame one time (the game gives you a free shot at it), I vowed never to play again. The stuff I won was so powerful it was almost game-breaking. Fernz Gate is already ludicrously easy. I can’t imagine anyone paying any real world currency to make their amazingly over-powered characters even stronger. When you are already exploding dudes with one hit, what is the point?

Regardless of the mobile pay-to-destroy-enemies madness, Fernz Gate is a fun little game. The writing is sharp and witty, and doesn’t drown the player in endless exposition and meaningless conversation. The 16-bit graphics are sharp, walking a line between original design and nostalgic reference. The dungeon design is interesting, and the UI is clear and uncluttered.

If my experience with Fernz Gate is any indication, Kemco’s JRPG onslaught is carrying some minor gems along in its avalanche of releases. In the last year, the following games have been released for PlayStation Vita:

If, like me, you have found yourself curious about any of these titles but were hesitant to spend your money on them, I would advise checking out a few reviews. If you like what you read, give the game a shot. Most of these games sell at full price for $14.99, and they go on sale frequently.

I’m glad that I was wrong about the “cheapness” of Kemco’s JRPG titles. It turns out that they aren’t carelessly producing garbage games just to flood the market and make a quick buck. Instead, it seems that they are able to quickly produce quality budget titles because they have enough experience to actually know what they are doing.

I’m sure that none of these Kemco titles will ever challenge the quality of even the lowest tier offerings from companies like Square-Enix or Xseed. But if you are in the mood for a light JRPG and you aren’t feeling too demanding, you could do worse than to check out a Kemco game.