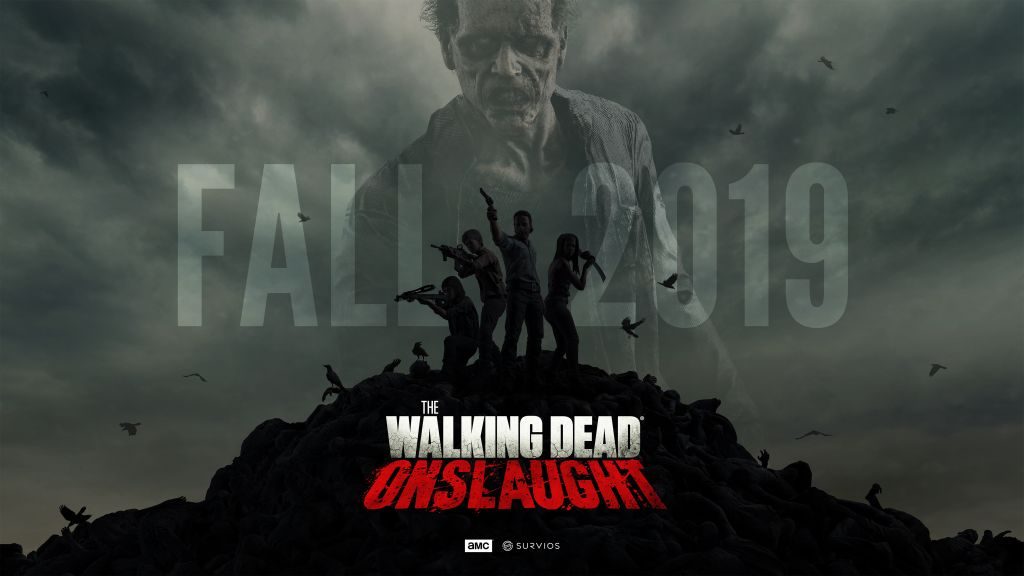 Coming hot on the heels of last week’s Battlewake announcement, Survios (CREED: Rise to Glory, Electronauts) and AMC (half of the good shows on television) today announced The Walking Dead Onslaught, a new action/adventure title for PSVR.

While details are light, there are a few things that we can glean from the text of the official press release, which reads as follows:

“From AMC and Survios, the studio behind top-selling VR titles Raw Data and Creed: Rise to Glory, The Walking Dead Onslaught invites players to assume the roles of their favorite survivors from the TV series, struggling against the relentless walker threat while confronting both the horrors and humanity of this apocalyptic world. With an exclusive original story, visceral real-motion melee and ranged combat, player progression and a full campaign mode, AMC and Survios deliver the most immersive “The Walking Dead” experience yet.”

All right, so let’s unpack that a little bit (and engage in some unsubstantiated speculation). From the fact that this a VR title, it is safe to assume that TWD Onslaught is a first person game.This will put the player front-and-center in the middle of the zombie apocalypse, which is an exciting and terrifying proposition.

In the artwork displayed, primary characters Rick, Michonne, Daryl and Carol are clearly visible (…well, I had to blow it up a bit to see Carol, but it is definitely her). So when the press release says that players can “assume the roles of their favorite survivors”, we can surmise that at least these four characters are in the game.

The presence of Rick Grimes puts us solidly in the show’s past, as Rick has wandered off the grid of the regular TWD show and into his own pending series of TV films. This opens the door for other, now-deceased or departed characters to appear in the game. There is no word on other long-time favorites, but knowing Survios, we would not be surprised to see luminaries such as Karl, Maggie and Glen show up as DLC eventually.

The press release speaks of an “exclusive original story”. The brief teaser trailer released today shows images of the primary characters’ signature weapons scattered about an abandoned diner that has clearly recently been the site of a bloody battle. Will Onslaught see the player defending this setting against endless waves of the undead? The game is titled “Onslaught”, after all.

While we are able to make a few small assumptions from the light information given in the press release, we are still left with many delicious questions. The release speaks of “visceral real-motion melee” (samurai swords!) and “ranged combat” (crossbows!). Does this mean that if the player chooses to play as a particular character, they will be locked into using that character’s weapon of choice?

There is no mention of multiplayer in the press release, but Survios is one of the major players in online multiplayer VR gaming. The artwork shows four characters, which would imply that we might be looking at a Left 4 Dead-style four-player defense game. It is unclear at this point whether any of the actors participated in the making of Onslaught, but it does look as though their likenesses are being used in-game. Will the game include voice work from the original actors?

It is very exciting to see a VR game based on such a prestigious license. And with the ups and downs that The Walking Dead franchise has taken recently in the video game space, the field is wide open for Survios to deliver a crowd-pleasing title and right the ship.

No official release date has been announced yet, beyond “Fall 2019”, but you can be certain that anticipation for this title will be high. Be sure to stay locked in, as PlayStation Universe will bring you all the details as they emerge.