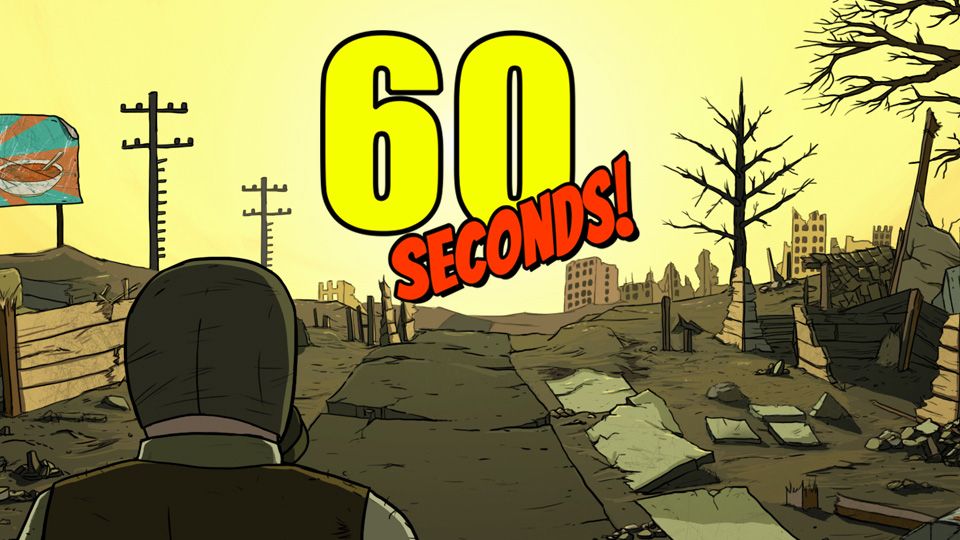 Developed by Robot Gentleman, 60 Seconds! looks to take light of nuclear fallout. Satire does well on its own, but there is always more to a game than just its intentions. Does it have what it takes to make a good laugh in the face of danger? That success depends on how well such a game translates onto a bigger platform like PlayStation 4.

Your family is part of a borderline-paranoid military group dedicated to ensure that the public is ready for nuclear strikes. Through active, very intense simulations, you and your family must find ways to survive in the bunker beneath your house for as long as it takes for you to get rescued. At least, that’s the tutorial level. After that, you have to really find a way to survive actual nuclear strikes until someone comes to retrieve you all.

A good comparison to 60 Seconds! would be Oregon Trail but with a rather more intense beginning. The first 60 seconds are dedicated to you grabbing as many resources as possible and dumping them into the bunker before the nuke drops. This makes for an extra game mechanic–or rather the only truly interactive one, as the rest of the game is text-based and filled with decisions you have to make. What makes these decisions engaging comes in how prepared you are.

In the 60 seconds you have before the fall, you have to grab the other three members of your family as well as any other supplies you can grab. You are limited to four capacity slots, and certain things take up more than one slot. Each person takes up more than one, as you would expect. At the same time, I say it’s in bad taste (and design) that the daughter, who is slightly larger than her brother, takes up three capacity slots, while the mother, who is significantly taller than everyone in the house, only takes up two slots.

Each family member needs food and water in order to survive, of course. At the same time, your family members need to be nourished enough in order to go out on supply runs. You might grab a ton of food before you flee to the bunker, but you still have four mouths to feed for over a month. To top it off, you also have to have the means of defending yourself in the event of intruders.

After the first 60 seconds, much of this game is based on the luck of the draw. You make decisions based on the scenarios you face along the way, and none of them are scripted. The first couple runs felt interesting, but the longer I played, the less control I had over my circumstances. While this makes sense, it begins to contradict what the game seems to attempt.

While this is a simulation game, 60 Seconds! never loses its tongue-in-cheek intentions. Family members can lose sanity one day without something to do, and death can come after three days of not eating. Other times, someone can go over a week without eating. A lot of dice are being rolled, making the circumstances very much challenging in their own right.

It’s hard to take 60 Seconds! seriously when it combines such difficult rubrics under the hood with obviously goofy intentions. The portion of the game in the house does not play well, making the challenge scale very inappropriately to what the game asks of you. Picking up items has a delay in it, and oftentimes you have to get incredibly close in order to grab anything. To make things worse, most inputs while in the bunker–while not game-breaking due to simplistic gameplay–are either delayed or ignored; considering how simplistic this part of the game is, I can’t help but think that converting this to console did not go well.

The point to 60 Seconds! is to try and keep an ignorant family alive in a terrible crisis. There is some satire in there among the fallout, but the reward for persevering and attempting different strategies is mostly dependent on how the game treats you rather than the decisions you make. It can be fun for a bit, but the novelty can easily wear off if the style of gameplay doesn’t click with you. Playing voiceless games for hours and hours that are conveyed entirely through subtitles is something I do regularly, but I quickly lose interest in text-based games when they lack substance like this.

An Occasionally Enjoyable But Flawed Effort

There are specific intentions with 60 Seconds! that the developer tries to do, but the ability to enjoy those intentions are strictly on the player. If you enjoy an experience that requires you to see a scenario out rather than play through it with stilted difficulty that also doesn’t take itself seriously, then 60 Seconds! is your kind of game. There is little challenge and some fun scenarios to work through, but the payoff offers very little long-term worth. Couple that with delayed inputs and you end up with a mediocre effort in 60 Seconds!

60 Seconds! is out now on PS4, PC, Nintendo Switch, iOS and Android.

60 Seconds! offers up a different way to play a strategy game features some light-hearted gameplay and a brief time sink. However, gameplay quickly contradicts itself, and the port work offers little help to the cause. There is some fun and some charm, but it's very short lived.