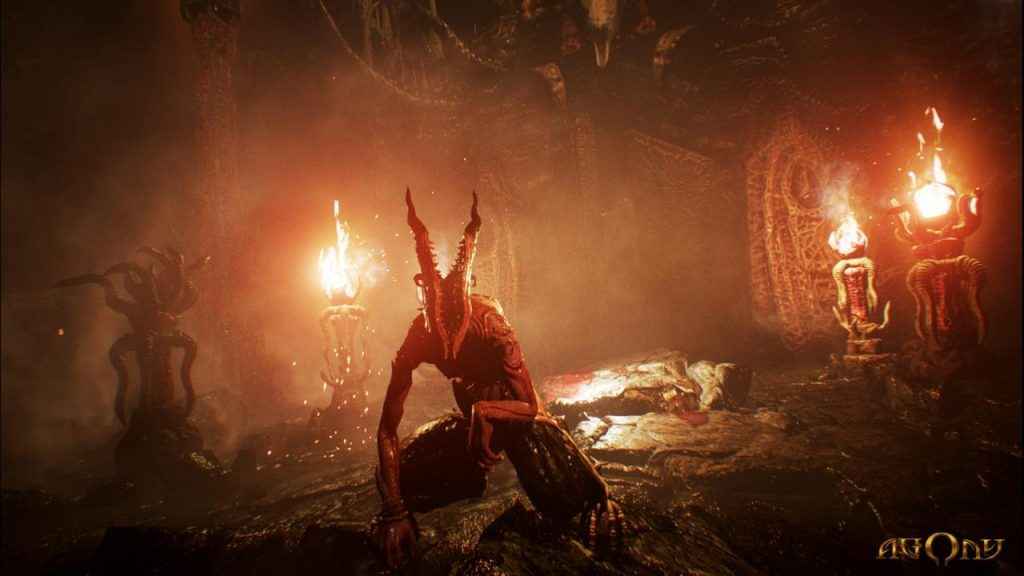 Agony is a hard game for me to swallow especially after such a long development cycle. I followed the title for quite a long time and had high hopes for it. The ideas sounded good and the setting of trying to survive in hell really intrigued me. Unfortunately most of the game is just that, ideas that either failed in execution or were just bad ideas.

How to unlock all endings

Agony tells the story of a soul sent to hell trying to get out by finding the Red Goddess and asking her for her aid. That’s pretty much the entire story and even something as simple as that isn’t portrayed properly. There were plenty of times where I didn’t quite understand if the Red Goddess was actually trying to help me or kill me.

Agony review: Make up your mind

In one scene the Red Goddess tells me to meet her at some decaying tree, once I get to the tree she tried to have a giant demon kill me, after surviving the encounter and running into her again she again tries to help me by telling me where to go and what to retrieve for her as if the scene before didn’t even happen.

This isn’t the only time it’s happened. Earlier in the game I encountered a succubus that helped me reach the Red Goddess only to try and kill me when we arrived. It just didn’t make any sense to me.

The gameplay isn’t any better. Agony is a survival horror title where most of the demons will kill you instantly when they catch you. You can hide in piles of bodies or in the cracks of walls but in my experience it was pretty pointless trying to run and hide when you got spotted.

Anytime I tried to run away and hide after being spotted I failed not because of my own fault but simply because the demons were always faster then me and caught up to me forcing me to either restart from a checkpoint which at times set me back almost half an hour or try and find another body to possess.

Possession is another aspect of Agony where as a spirit you can inhabit the tormented people living in hell. You can only do this when you remove the bags of their heads as possession can only be done if their heads are exposed.

As I progressed I was able to possess a lot of the demons giving you attacking abilities but you can’t stay in their bodies too long before being expelled but you can repossess them right away which begs the question why get expelled in the first place?

Agony for some reason also has a skill system. By finding fruit from the forbidden tree you can upgrade you’re skills in holding your breath longer, making less noise when moving or being able to possess higher level demons. At one point I collected about four fruits and totally forgot that I could upgrade parts of my character because it just feels so unnecessary and I never really noticed much of an impact outside of the demon possession.

Agony features plenty of puzzles to solve but for the most part they simply have you trying to find patterns and then draw that pattern on stone to open a doorway.

At first these were incredibly annoying as I thought it was just randomly guessing the right pattern but I started to pay attention more and noticed that there are statues that point to a lot of the patterns.

The key was to find the one pattern that had multiple statues pointing to it. I actually really enjoyed most of the puzzles in Agony but they did get very repetitive and some of them stretched across large areas which had demons patrolling that killed me plenty of times as I was trying to draw a pattern to open a door.

Agony review: Where am I going?

There are plenty of collectibles to find in Agony from paintings, idols, and secret rooms. Collectivists will find plenty of stuff to hunt down if they can see them.

A massive problem with Agony is that it’s dark, too dark. I’m not talking about mood or setting but I have to turn the brightness and gamma up almost to max just so I can see where I was going dark. Agony is also very shiny.

For those who remember games made in the Unreal engine back in the early days of the PlayStation 3 where everything looked glossy and shiny. Agony brings that back, the games textures are very shiny. Light reflects off of everything and everything just looks wet. It’s incredibly frustrating when I’m moving down a cave only to have the walls glisten all around you as if i’m walking through a crystal cavern..

Agony’s strongest aspect is it’s sound design. Screams are heard throughout the game giving you a real sense of dread and the demons stalking the various locations can either mean your doom or you’re salvation. I found myself constantly relying on the sound the demons make to figure out how close they are to me and if they may be lurking around the corner.

Although the ambient sound is good the voice work isn’t. The Red Goddess herself seems to be the only one the developers cared about as all the characters sound awful its so bad it sounds like they did back on the PlayStation One generation.

Agony desensitized me to the themes it was trying to portray and I just didn’t care for them anymore simply because they are over done, Agony would have had a lasting appeal to it if these scenes had a bigger impact with some substance behind them

Agony is also agonizing to get through. Agony is full of game braking bugs and glitches everywhere you look. Texture pop in appears constantly. At one point I was running and ran into an invisible wall. I thought I was stuck on something so I looked down and around me to see if I was stuck only to turn around and see a wooden fence in the spot that I stopped at. The game just didn’t load the fence fast enough.

When I started the game it had this infuriating screen tearing every time I would move around. It would be this constant line in the middle of the screen. A few days later a patch was released and I was relieved that the screen tearing was fixed, my relief unfortunately was short lived.

Though the screen tearing was gone in its place came constant game crashes, corrupted save files every time the game would auto save, bad frame rate drops, and a loading indicator appearing in the middle of random locations. where it didn’t have them before. All of these problems appear constantly and are impossible to ignore.

Agony is a painful game to play. It’s not just because of all the technical issues, its also in its design. Character motives constantly change. a pointless skill system, horrible lighting and quite honestly not scary in any way. Agony is the perfect name for this game because Agony is what you feel playing through it.

Agony is not a good game. It feels as if the developers just gave up after such a long development cycle. Filled with bugs, boring and infuriating stealth and chase sequences and repetitive puzzles it's very hard to find anything to enjoy in Agony.