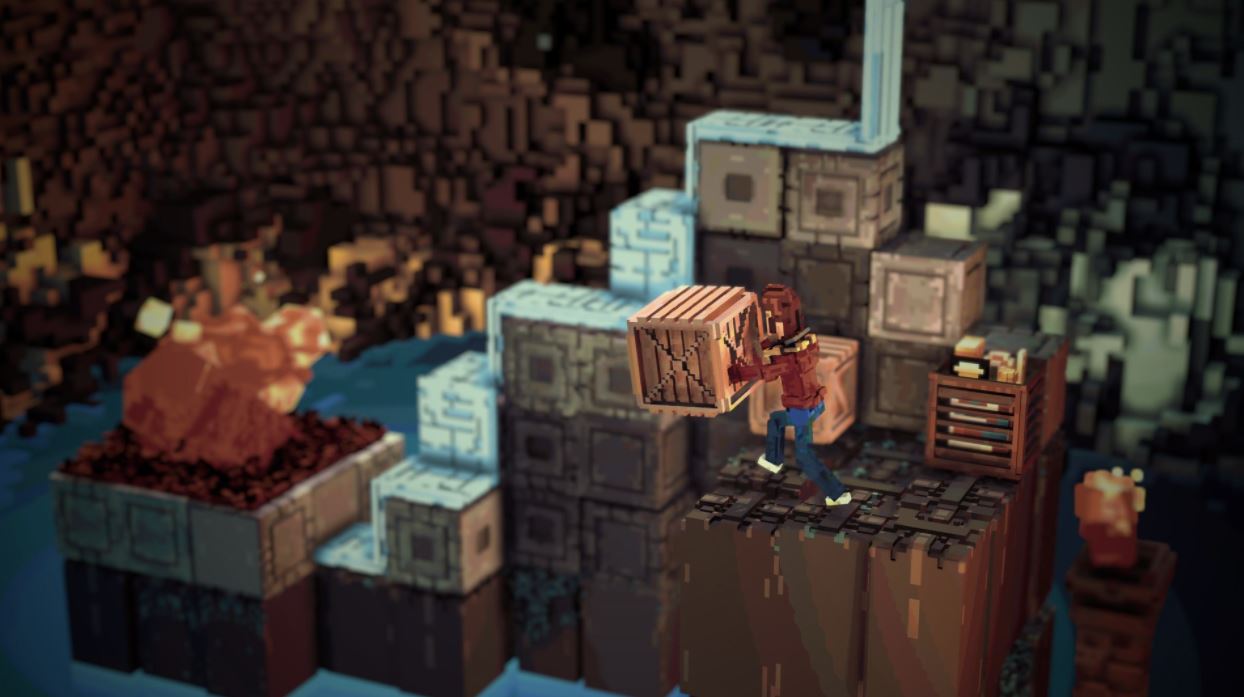 Bonfire Peaks PS5 review. It’s a difficult if not an impossible task to erase the past and yet despite that fact, some of us go to great lengths to do so. From moving to a new town, to changing our name or the way we look, the desire to start over and wash ourselves clean of the past is inextricably tied into our own mortality – we know we have finite time on this earthy globe and so mental fortitude allowing, we try to wipe the slate clean to start over so that we might reach something approximate to our own personal best playthrough.

Bonfire Peaks from indie developer Corey Martin wrestles with this concept in earnest, but rather than wrapping a slow paced narrative adventure around this notion that might seem at first like a more natural fit, we instead have an endlessly clever, isometric puzzler where you must climb the titular Bonfire Peaks; setting your belongings alight as you ascend towards a potential previously unrealised.

A Commendably Clever And Accessible Puzzler Underscored By An Emotional Premise

If the underlying concept of Bonfire Peaks weighs a little too heavy on the mind for some, then the actual puzzle solving gameplay that sits atop its low-key, though sagely pontifications on life and the material world is more digestible as it is light, wonderfully accessible and quite able to both be enjoyed and put down at a moment’s notice. 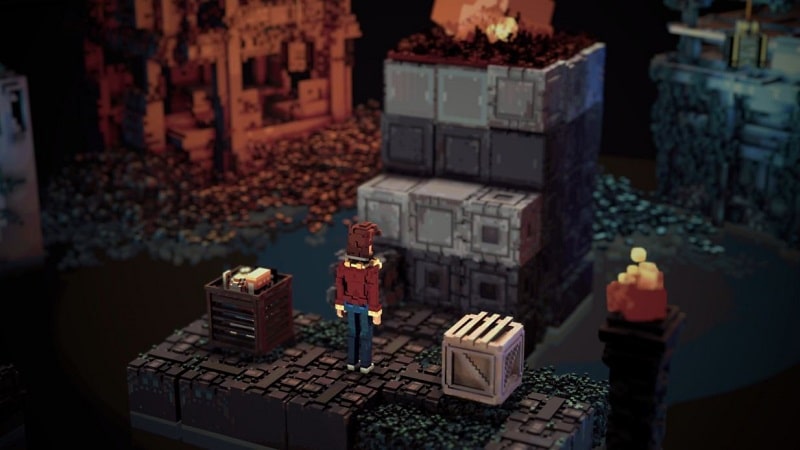 Bonfire Peaks effectively splits itself between two realms of agency. You have the overworld map in which you must ascend those titular peaks, but to do so you must complete each of the levels along the way as the reward for doing so is often a special set of crates that allow you to reach previously inaccessible areas on the mountain.

The other main area of the game that you’ll spend the majority of the game scratching your head and whooping like a delirious elf when you finally solve that puzzle that has been troubling you for hours, are the individual levels themselves.

Essentially self-contained dioramas, the goal in these isolated stages is always the same; ascend to the top with your crate of personal belongings and cast them into the waiting fire. Movement is controlled in quite a regimented and precise fashion, as our melancholic protagonist can be directed to turn and move in a tile based fashion, with one step taking him across one tile on the map, while ascension to new platforms is permitted on the assumption that you’re attempting to do on steps that are no taller in one tile. 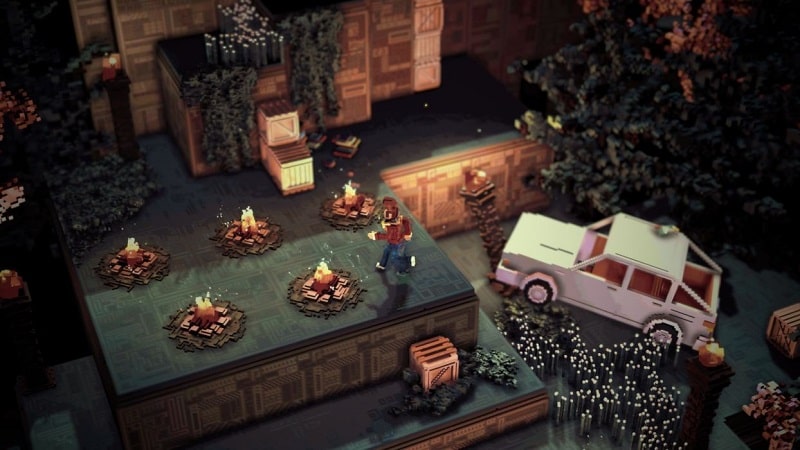 Each of the conundrums that are housed within these dioramas test those basic rules in a number of increasingly clever ways that always seem like a natural extension of things that you already know. For example, you soon realise that while you can turn on the spot easily enough, attempting to do so with a crate in hand causes your turning circle to extend by one tile (or more depending on the size of the item) – forcing you to factor that in when attempting to conquer not just that level, but also future levels that will interweave these newly discovered techniques into its confounding tapestry of puzzles.

Bonfire Peaks is superb at this – the streamlined puzzles are such that it never feels aimless or condescending but rather that you’re being taught new tricks, mechanics and methods without really knowing it. As such, Bonfire Peaks feels like it treats the player as a fully functioning, nuance seeking adult and in doing so, forces me to confront the somewhat joyless fact that so few other games actually seem inclined to do the same in comparison.

It also doesn’t hurt at all that Bonfire Peaks isn’t an especially long offering either – because quite simply it has no need to be. With each level taking between one and thirty minutes depending on your puzzle solving acumen, frequent saves after each level and an overall game length of about ten hours or so, Bonfire Peaks is that rare sort of engaging curio that absolutely enraptures you when you’re playing, but is also sufficiently respectful of your own time to let you hop in and out as you please. 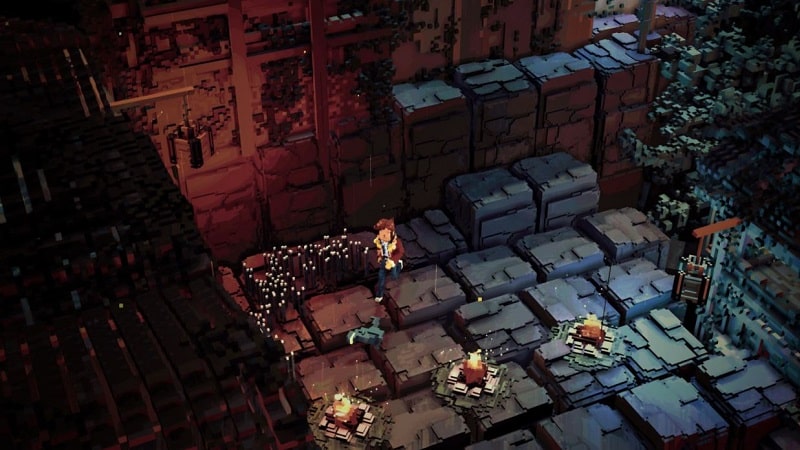 Then there is the visual presentation. Is it any wonder that like the other elements of Bonfire Peaks roundly impressive offering that it excels in entrancing the senses? Visually, Bonfire Peaks makes ample use of its voxel design – allowing it to affect a much more solid appearance that beautifully underscores its expressionist diorama realms in a way that it is both eye-opening and warmly charming. Sure enough it isn’t the most technically accomplished title on PS5, but it’s style remains opulent and stuffed with charm all the same.

Ultimately then, the tale that Bonfire Peaks wishes to impart is seemingly an optimistic one. Though you’re burning your belongings and erasing your connection to both the superficial and the past, you’re also in a mode of permanent ascent – climbing higher and further than you ever have before, a revelation that refocuses your thoughts to the future rather than stalking the increasingly sprawling graveyard of past regret.

Bonfire Peaks imparts the sort of low-key, read-between-the-lines emotional storytelling that reminds me why I love indie games so much – unfettered as they are from the sort of cloying, indentikit focus group and shareholder driven development that all too often drains the colour, life and imagination from bigger budget fare that also seems to assume that everyone’s emotional intelligence is that of a crushed gnat. 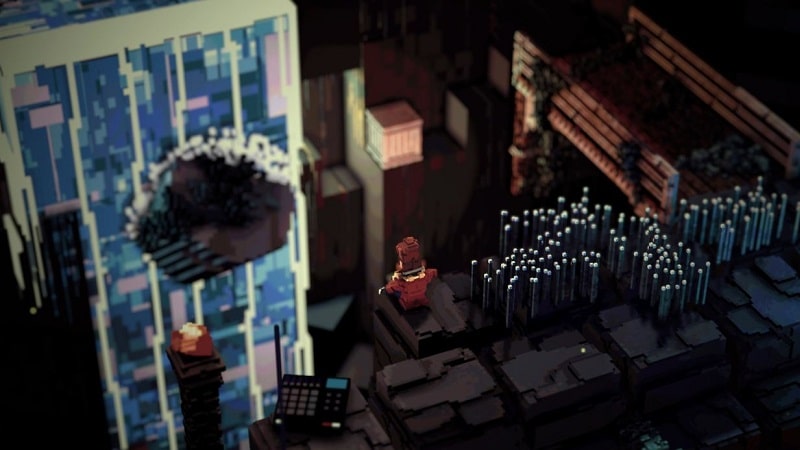 If Bonfire Peaks is all about setting the past aflame and moving on, so too is it also a distinctly fat-free puzzler about igniting both the furthest logical reaches and the deepest synapses of your brain, as each puzzle solved brings with it that much craved dopamine placebo which improves your mood and makes you realise that the past is indeed prologue and that the rest of your future lay ahead – you just need to gaze upward.

Bonfire Peaks is just what I needed to play right now and chances are, if you’re hungering for beautifully constructed conundrums and some insightful commentary about where your life has been and where you could take it next, chances are this charming little puzzler will be just what you need too.

A deeply thoughtful, eminently accessible and cleverly crafted bite-sized puzzler, Bonfire Peaks has more subtle emotion, charm and smile-cracking ingenuity than most of the games that have released this year. If you want to hone your logical senses and embolden your spirit concurrently then Bonfire Peaks is certainly one summit worth conquering.