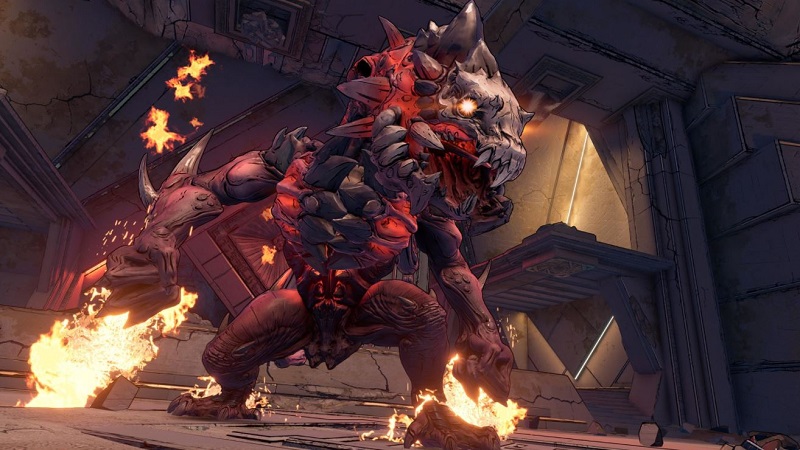 Borderlands 3 PS5 Review. Arguably one of the better looter shooters on the market, Borderlands 3 arrives on PlayStation 5 with a whole heap of shiny next generation upgrades. Is Gearbox’s snarky shooter still as great as it was a year ago though? Why yes it is and then some.

A heads-up first though – as we’ve covered the guts of the game much more fully within our original PS4 review in September last year, so we’d be inclined to point you in that direction should you be looking for a detailed critique of the game itself. So if you’re looking for the down low on what the PS5 version of Borderlands 3 offers above and beyond it’s last gen counterpart (the PS4 being considered ‘last-gen’ is still something that’s taking a while to get used to) do keep on reading.

The improvements that the PlayStation 5 version of Borderlands 3 brings over the PlayStation 4 version of the game are pleasingly substantial, so let’s get down to brass tacks on the most obvious of these – the visuals. As is seemingly the norm these days, Borderlands 3 boasts a pair of resolution and performance focused visual presets in order to allow players to customise their experience. The results are also pretty much what you might expect too, but that doesn’t make them any less welcome.

Resolution mode locks the resolution at native 4K but unlocks the framerate, resulting in a visual presentation that is the sharpest and most detailed available but which also boasts a wildly fluctuating framerate during busier battles. It’s not ideal, sure, but even in resolution mode Borderlands 3 on PS5 is still hugely playable and enjoyable all the same; it just lacks the constant smoothness and improved responsiveness that the performance mode provides.

Much more preferable then, the performance mode in Borderlands 3 is clearly the way to play Gearbox Software’s hyperkinetic looter shooter. Completely smooth and effortless to play, Borderlands 3 running under performance mode is simply a joy, though the trade off in texture detail and overall picture sharpness is certainly noticeable.

Brilliantly, while the performance mode in Borderlands 3 nails its 60 FPS target, so too does its support for 120 FPS mode get the job done too. Put simply, if you’re lucky enough to have a shiny, HDMI 2.1 compliant display connected to your PS5, you’re in for a treat – Borderlands 3 has never run or played this smooth before and is all the better for it.

Beyond just upping the standard of visual presentation in single player terms with a 120 FPS presentation, Borderlands 3 also debuts another first on PlayStation 5 with support for up to four player in local split-screen play. As an added bonus, Borderlands 3 on PS5 also supports vertical orientation for two player split-screen too, allowing players a much wider range of vertical real estate to play with in local play.

More than anything though, simply being able to play Borderlands 3 in four player co-op locally with friends makes the PlayStation 5 version of Gearbox’s threequel not only more than worth the price of admission, but also arguably the definitive version of the game as a result.

Then there are the loading times. Oh boy. Look, the PlayStation 5 version of the game absolutely bodies the PlayStation 4 version of Borderlands 3 in ways that can only be described as highly unsavory thanks to the screamingly fast SSD found in the newer console. Fast travels take around 14 seconds to accomplish on PS5 whereas they clock in at around one whole minute on PS4. Meanwhile, a cold boot into the game takes around 34 seconds on PS5 and over two minutes and 25 seconds on PS4. See? I told you PlayStation 5 wasn’t messing about here.

Finally, there is the implementation of the haptic feedback and adaptive triggers of the PS5’s DualSense wireless controller. Now, when you let rip with your trusty Maliwan assault rifle you’ll feel the rattle of the firepower rumble from the center of the pad and through the triggers, while in another neat touch, the color of the DualSense controller changes depending on the weapon that you have equipped.

Though the implementation of haptic feedback isn’t quite as bombastic as that seen in Call of Duty: Black Ops Cold War, it is nonetheless palpable enough to make you grin like a giddy loon that for the first time ever, you can catch feel the guns you fire in Borderlands 3, rather than just seeing and hearing their destructive output.

In the end, Borderlands 3 makes a proper grand splash on PlayStation 5 – unlocking its local multiplayer potential all the while providing a handsome uptick in visual opulence and for the first time, making players feel their guns rather than just seeing them or hearing them. If Borderlands 3 was merely just ‘great’ on PlayStation 4, it’s now essential on PlayStation 5.

Finally realising its potential, Borderlands 3 goes from great to essential on PlayStation 5, thanks to its new visual features, DualSense implementation and the ability to have up to four players blasting their way through the game locally. If you've been holding off playing Borderlands 3 until now, your watch has ended.