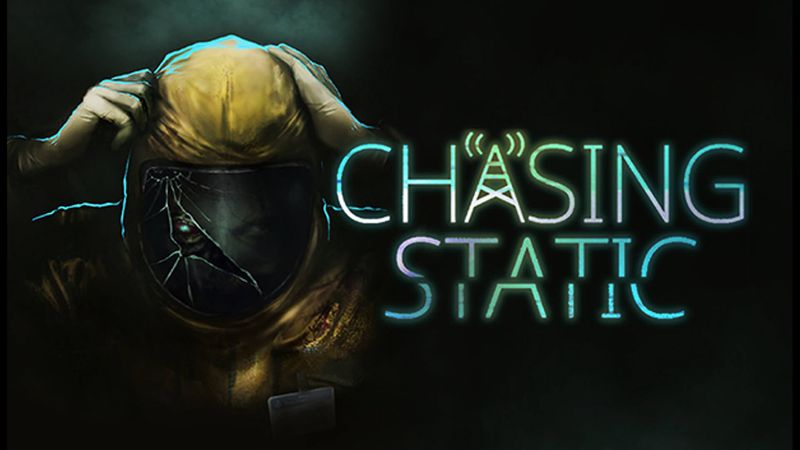 It’s style of games pay homage to the late 90’s era of survival horror in both appearance, and feel. With that in mind, how does its latest Chasing Static fare within a modern gaming landscape?

Chasing Static is a first person, horror, walking simulator, that focuses on narrative rather than combat. The player will take control of a character named Chris Selwood, and put together the pieces of a mystery by wandering around its retro environments and finding items to progress through the game.

There is no fail state to speak of, which immediately removes some of the potential threat, although that’s not necessarily a bad thing in some cases.

Driving through the unique setting of Northern Wales, Chris will pull up to the suitably named “Last Stop Café”. After some confident voice acting plays out, in the form of small talk, the game will soon give you control.

As you might suspect, with what starts as simply, the potential for a mug of low-poly coffee, quickly becomes something more sinister. I really enjoyed the opening moments of the game. At this stage, Headware Games did an excellent job of pulling me into its world. 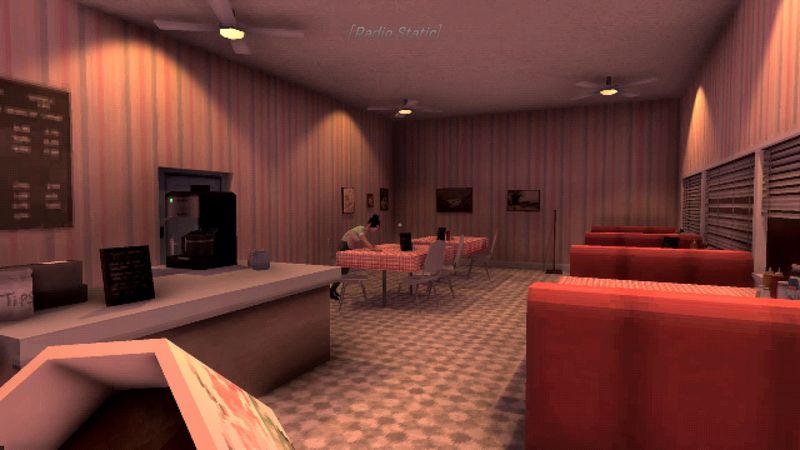 Point Me In The Right Direction

After some simple puzzle solving, you will be venturing around the surrounding areas, finding items to piece together the narrative and progress.

Eventually you will find the Frequency Monitoring Device, which seems like a super natural combination of a directional microphone and a Geiger counter.

Following the device and its directions will lead you towards the main objectives. There’s not much to do other than admire the excellently crafted PS1 style aesthetic, and figuring out which item needs to be used and where.

The game will outright tell you if you have items remaining in a certain area, so there’s no real challenge in locating what you need. It is a little dull in that regard, but the game is so short, it never takes its toll. 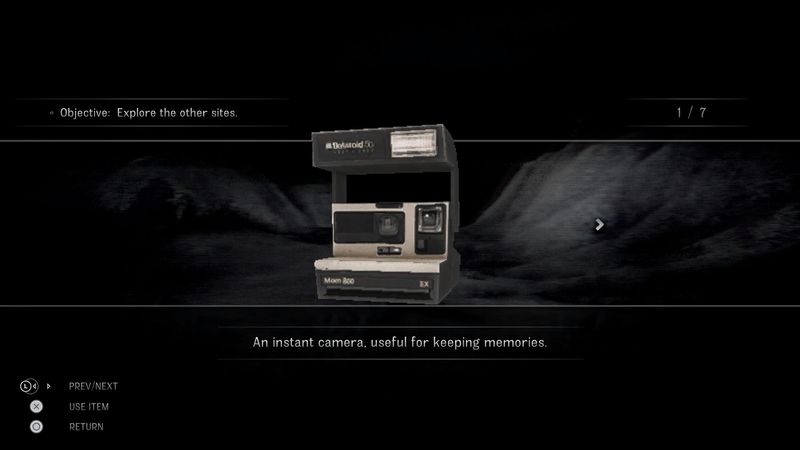 Headware Games does a superb job of creating an aesthetic from that late 90’s era of horror games. The nostalgia for that era is very much apparent, and felt, as you wander around Chasing Static’s environments.

It definitely succeeded in taking me back to those games from my childhood with its excellent presentation, which is the aspect of Chasing Static that I enjoyed most.

Coupled with some excellent sound design, or lack there of at times, to bolster its retro-horror aesthetic, fans will definitely appreciate the developers shared love for that era. The way the audio is suppressed when using the Frequency Monitoring Device is a really nice touch.

Whilst it succeeds in being a good throwback, it doesn’t equally succeed in being a horror game. Unfortunately, perhaps the nature of these types of games is that some of the fear factor is removed.

Though the environments do feel somewhat oppressive, the jump scares often fall flat, and the tone isn’t always effective.

In fact, there were two occasions where I was more startled by the landscape popping into focus, rather than the jump scares implemented throughout the game, that were actually designed to scare me. 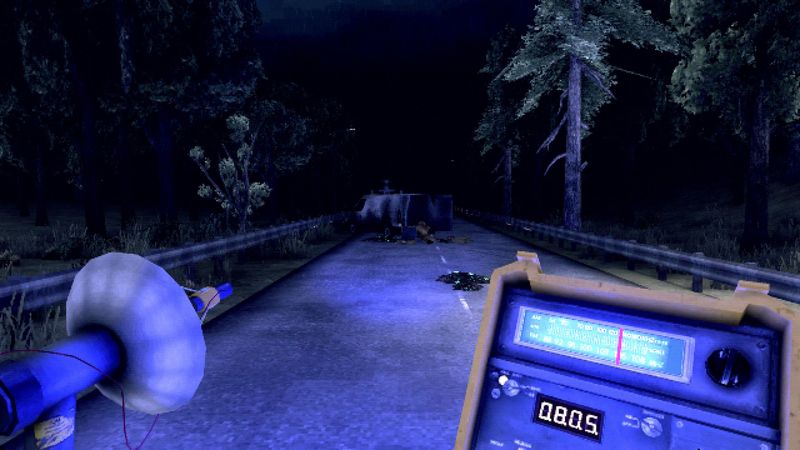 Initially, the game opens with an intriguing mystery. It was a familiar kind of mystery, though effective in that it made me want to keep going.

Using the Frequency Monitoring Device, you can peak into past and see echoes of characters from before the events of the game. A plot device we often see in games, but there’s a couple occasions during the short runtime where it works.

Given that it will only take you roughly 2 hours to beat, the intrigue and slight familiarity is quickly replaced with an array of genre tropes, that ultimately would have worked better in the era the game is paying homage to.

I appreciated the setting of Northern Wales, as its rather unique. The polygonal British police cars and royal mail vans was fun to see.

Exploring the village of Hearth was the strongest part of the game, given the well crafted environments and strong atmospheric design of that area. 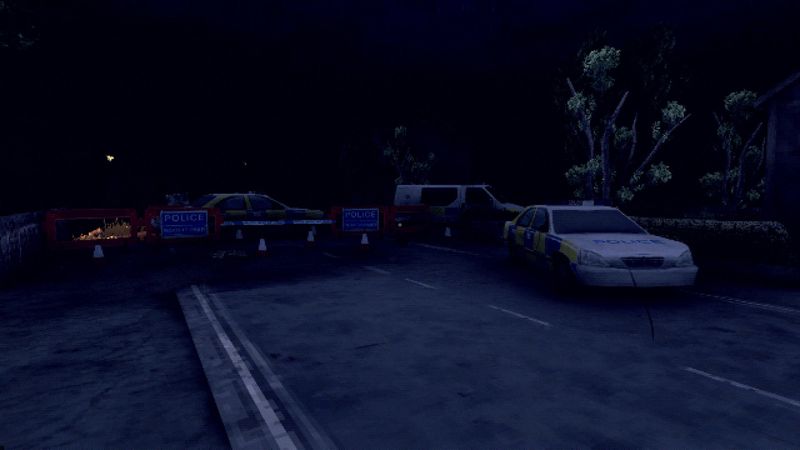 When it comes to replay value, there are multiple endings that I don’t think can be achieved in one play through. However, I found the ending to be particularly unsatisfying, so I only saw two of them. One of which, is a fun easter egg to a fan favourite horror game that I did appreciate.

The main ending, which offered the grand reveal to the overarching mystery suffered with the same narrative setbacks as the rest of the game. It felt like an all too predictable combination of many familiar plot devices.

I really enjoyed the atmospheric audio design, and expertly crafted PlayStation 1 environments, as it really gave me a great sense of nostalgia. It is also worth noting that I experienced no technical issues during my time with Chasing Static.

Those looking to find an aesthetically and atmospherically accurate depiction of PS1 horror games, should still check this one out.

Chasing Static is out now for PS5 and PS4.

Chasing Static creates a strong sense of nostalgia as the appreciation of late 90's era horror games shines through. The game works well as a throwback, but it doesn't work as well as a horror game in its own right. More than that however it is ultimately let down by an abundance of overly familiar narrative choices. Minding that, fans of PlayStation 1 style horror should still find something to love.