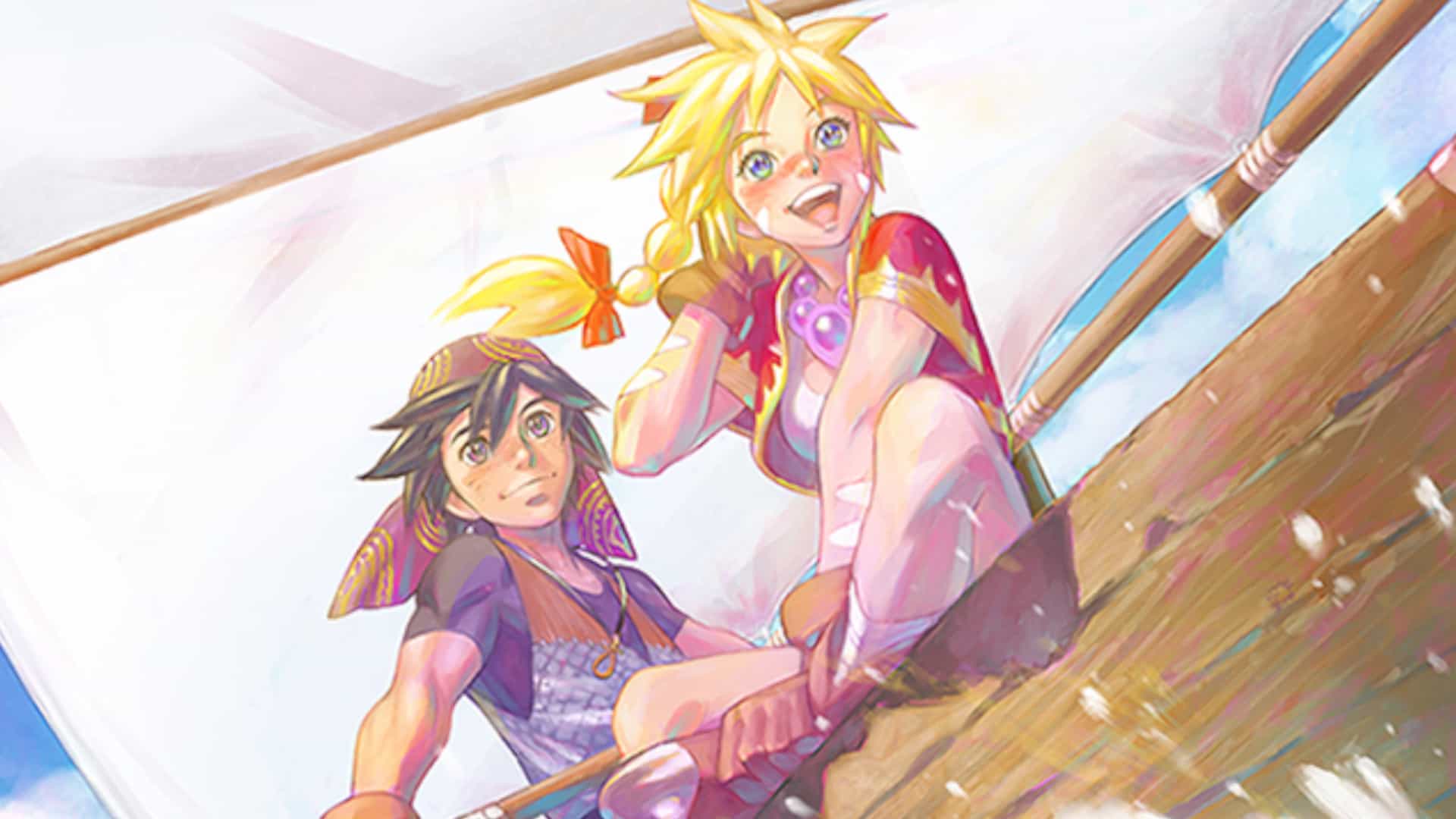 Chrono Cross: The Radical Dreamers Edition PS4 Review – Classics gain their renown through time and shared inspirations. This goes for books and movies as well. Chrono Cross: The Radical Dreamers Edition brings a classic 90s RPG to the PlayStation 4 with some hard-to-get side stories, complete with some enhancements and accessibility functions. With accessibility comes a wider audience, but its own set of game-changing effects come with that accessibility.

This review will consist of two parts: the review of the game and the review of the remaster, respectively. Feel free to jump to the second part if you already know about the game. If you’ve never played Chrono Cross, keep reading.

The story of Chrono Cross revolves around the circumstances surrounding a boy named Serge. In the early moments of the game, he finds himself in a predicament where the world around him believes that he died 10 years ago.

Soon after that, a cat-like man named Lynx arrives with his cronies that want to take Serge away. It doesn’t take long before Serge realizes that situation he’s in affects way more than just his little village. 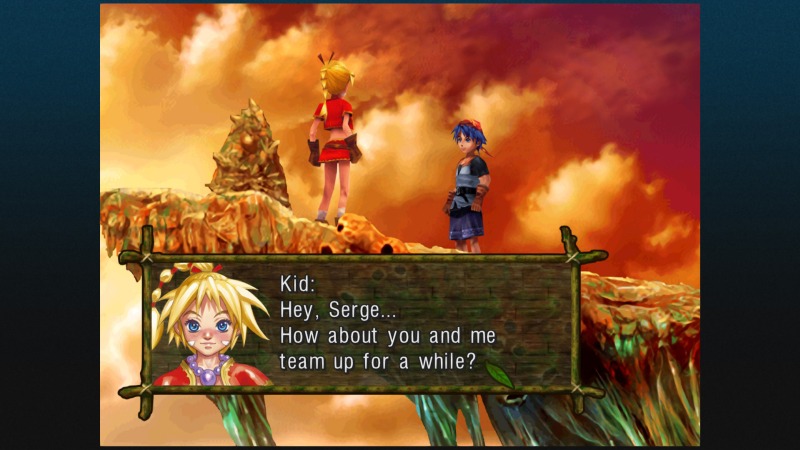 I found the narrative of Chrono Cross frustrating, not because it’s bad, but rather that it doesn’t always take itself seriously. Several moments give you that shock and awe, but most moments consist of matter-of-fact writing and information dumps.

Somehow everyone knows what you need to know (which I must say does keep the pace of the game moving quite well). While not bad by any means, the writing more often than not makes the population of the entire game feel like a plot device rather than people living their lives.

The best writing revolves around character moments, both main and side characters. These moments tend to last no longer than a ten-minute scenario at most and a couple minutes at least. These character-driven scenes feel great, evoking an emotional response to what takes place. Unfortunately, the main narrative does not receive that same level of attention.

Chrono Cross doesn’t include just a couple side characters: You can potentially find well over 40, most of which can be recruited to your cache of party members. Each one has its own little narrative beat, but each story also revolves directly around the narrative in one form or another.

The argument can be made that the main scenario encapsulates the entire world and thus affects everyone. At the same time, the majority of these side romps directly involve the story rather than act as collateral damage to the circumstances that the narrative causes.

Some of these make sense, but most of them just feel convenient for the sake of moving the plot along. As mentioned before, it makes for good pacing, but it also makes for lethargic storytelling. 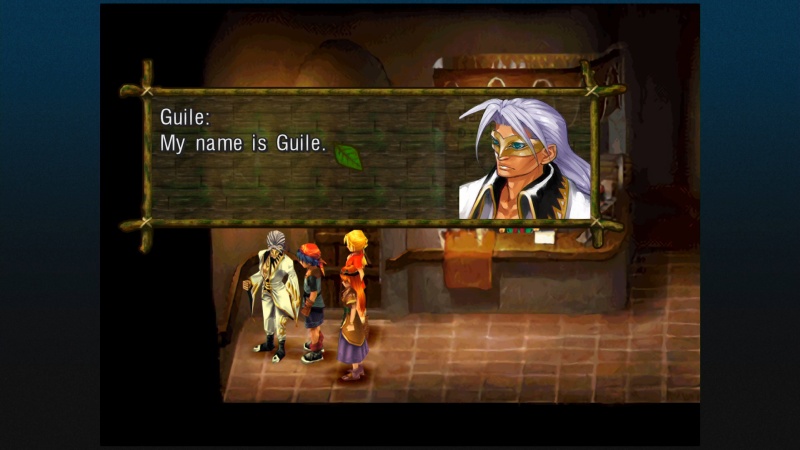 The Throws Of Combat

With each successful hit, the percentages for all of your subsequent hits increases. The main concept is to build up your percentages with smaller attacks to make your larger attacks land more successfully. You can squeeze as many hits as you can in each turn with the stamina your character has available, with larger hits naturally requiring more stamina.

The other significant part of combat is managing elements. Each character utilizes an element, such as the standard RPG forays of fire, water, earth, etc, and these bring more to the battlefield than just abilities.

Both you and your enemies can adjust the field’s elemental affinity to strengthen certain elements. Apply fire enough times, and all fire abilities get stronger, which also leaves water abilities weaker. 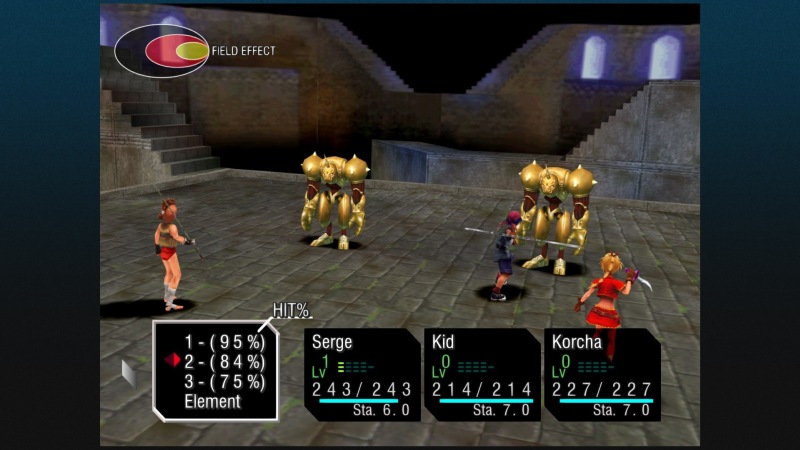 In principle, this concept sounds compelling. However, the game convolutes the instructions a great deal and makes the system more complicated. In order to get the elemental benefit, that element needs to be applied three consecutive times without a different type sneaking in there. These levels are displayed through three circles, the innermost circle being the most recent.

In hindsight, it all honestly makes way more sense now than it did when I began the game. The original dev team made a big mistake trying to build the tutorial of this mechanic into character dialogue rather than treating it like a simple tutorial (or even giving it to a more straightforward character).

Having the town’s old man character try to garble his way through the instructions made it sound much too cumbersome so early in the game.

The first ten hours don’t tax you too heavily on this aspect of the game, giving you plenty of time to explore how it all works without much risk. The game should have simply given basic beginning instructions and either let you figure out the nuances on your own or given further instruction at a later time.

Realistically, Square Enix did very little to improve the visuals in Chrono Cross. Some textures receive adjustments, mostly faces, but the rest of it comes mostly from smoothing out edges. To be perfectly honest, filters and enhancements generated through emulators create something more refined. That’s not to say that the final product here flops, but that just comes to show how very little actual enhancement went into the game. 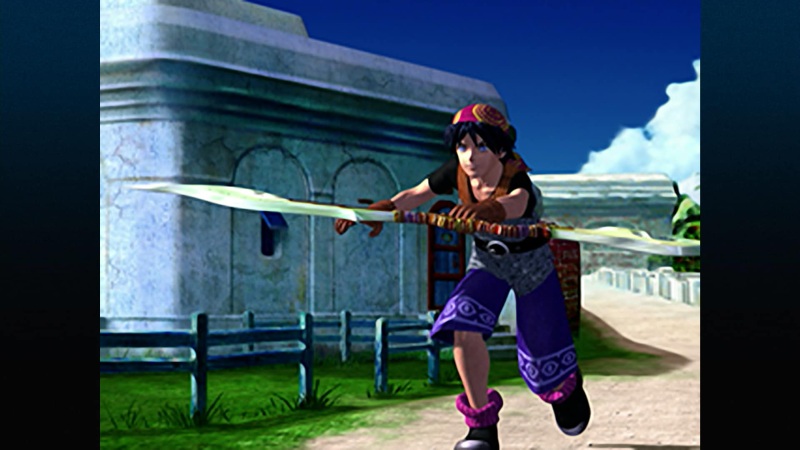 Like Final Fantasy VIII and Final Fantasy IX, Chrono Cross Remaster includes cheats to help make the experience quicker and easier. You have access to double speed (even half speed, if you wish), invincibility, auto-attack, and the ability to avoid battles out in the field. In general, I applaud these inclusions with older RPGs just because of how long they take to complete.

The increased accessibility makes it easier for newcomers to experience the game, and it helps veterans enjoy the nostalgia in a concentrated dose without the heavy slog of grinding levels and slow navigation.

Chrono Cross also benefits from these cheats because characters only truly level up after major boss or story-related fights. In fact, characters don’t really level up. Instead, they gain a series of stats after beating bosses (even if party members aren’t on the field). With the game now facilitating that method by allowing you to skip all unnecessary fights, Chrono Cross Remaster finds itself in a way playing closer to its true vision here than it did originally.

In fact, much of the experience in Chrono Cross stems from regularly managing the field and your attacks. With these cheats, you aren’t required to handle any of them. In fact, the entire game can be played without doing anything with your equipment or managing your elements at all. 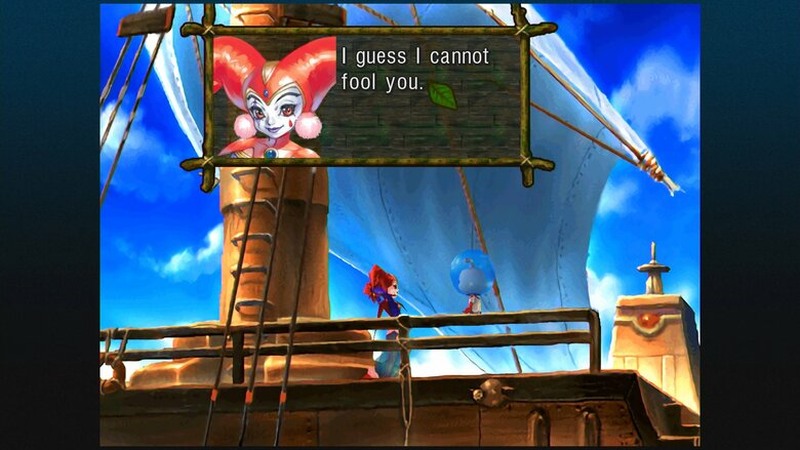 At the same time, this accessibility brings that benefit of simplifying the process so more people can experience the game. These cheats can be toggled on and off, and everyone can play the game how they wish. Equally so, I found myself constantly turning them on for lengthy boss fights and many of the random encounters the narrative requires me to fight.

While I see these features as a positive, they come with their own negatives that affect every player differently. They might be terrible to some while welcoming and helpful to others.

Elsewhere, performance takes a weird hit as well. It’s not that the frame rate itself slows down, but rather some included frames are chopped out. It’s hard to explain, but animations seem to jump between different points in their motion when you increase the game speed.

I spent a lot of time watching these animations while in fast motion, and they don’t actually cut out frames. It just looks like they do if you don’t concentrate on the specific movements, making many animations feel choppy.

The remaster also includes a side game consisting of stories revolving around what takes place in Chrono Cross. What makes these stories cool is that it doesn’t try to follow its predecessor at all. Instead, it acts more like a text-based RPG, telling the stories through written form rather than visual. 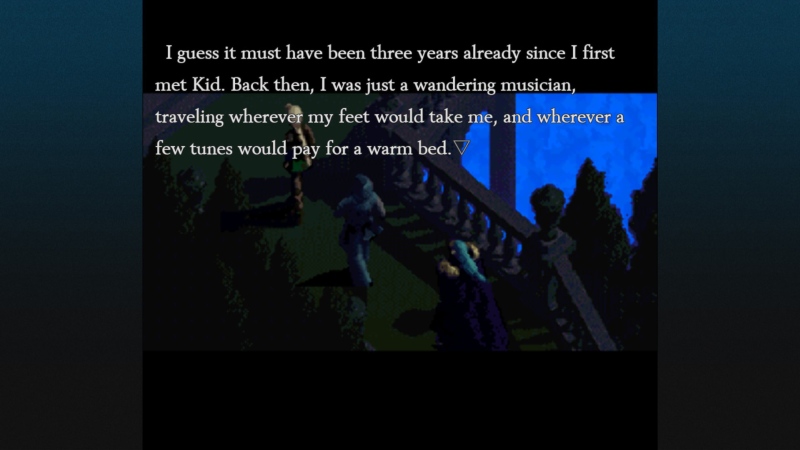 You still get a couple supporting images here and there, but they received zero remaster or enhancement at all. I think this plays to the favor of this game mode because the vagueness of the images still requires you to visualize while reading but still gives you a common idea of what to visualize.

While the writing isn’t life shattering, it does its job well. In fact, it delivers the stories better than what Chrono Cross does with its main narrative. This type of storytelling requires more attention to how it moves forward, and it pays dividends.

After the credits rolled, I look back on my time with Chrono Cross: The Radical Dreams Edition with fulfillment. Before this, Chrono Cross sat listed, almost permanently, on my list of games to play. I do believe that Chrono Cross deserves the “classic” moniker, but it still showcases plenty of faults.

The enhancements and cheats make the game more accessible but at the cost of the depth that gameplay brings to the formula. Despite its inherited and new shortcomings, Chrono Cross: The Radical Dreamers provides the best way to play both a classic JRPG and a series of hard-to-access side stories that add further depth to its legacy.

Chrono Cross: The Radical Dreamers Edition is out for PS4, PC, Nintendo Switch, and Xbox One on April 7, 2022.

Chrono Cross: The Radical Dreamers Edition brings a beloved classic to the PlayStation 4, complete with its old pros and cons. Some of the limitations of the first game get washed away with the enhancements and features that come with this release, but they also create a couple of their own. Like a true classic, this edition is not without its issues, but classics have a way of outlasting their criticisms through the eyes of those who experience them.