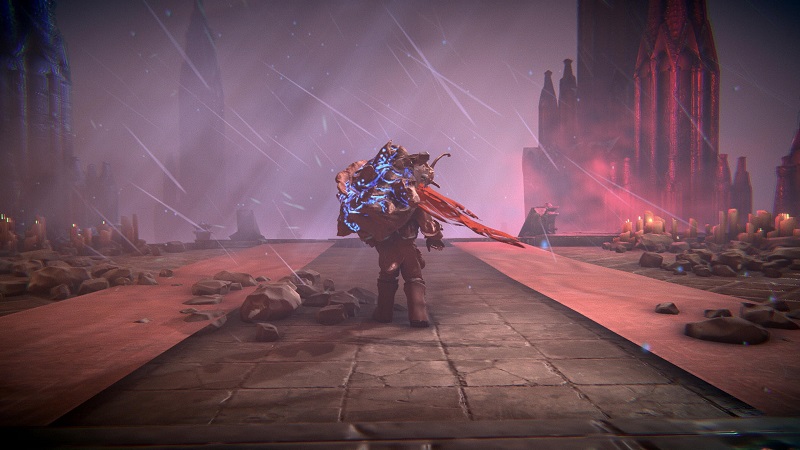 Clid The Snail Review (PS4) – Euclidies the Snail, or Clid, is simply not like the rest of the snails in the Citadel. While they all seem content to live a peaceful life, choosing not to bother with anything in the outside world, Clid simply wants to be able to roam free, protect his people, and drink bamboo juice – for this, he’s banished. That’s the starting point for Clid The Snail, from developer Weird Beluga.

It’s the latest indie game sponsored by PlayStation after the developers won the PlayStation Talent Awards in Spain, thus getting the chance to publish their game on the PS4 nationally, and since Koch Media picked it up for an international launch they’re now able to bring Clid to PlayStation players everywhere.

The trajectory of it all is very inspiring, especially considering that on the whole, Clid The Snail is a fine game that is as charming as it is fun to play, even if it doesn’t hit every note exactly right.

When you meet Clid, it truly is at his lowest point, although he won’t let anyone see it. He even admits as much to his friend, who barely has time to say goodbye as Clid is rushed out of the Snail Citadel for breaking their rules for the last time, even though his breaking the rules keeps the citadel safe from attack.

With only Belu at his side though, Clid looks ahead at his new life as an outcast, which is exactly when he meets the group Alastor, after defeating one of their members who had gone crazy, killing innocent bugs. Once they all talk it over, Clid joins Alastor, and has now found a new home, and a new mission – going across to different citadels in need and eradicating the slug plague attacking them.

I hesitate to dig further into the story than that, since once boiled down, the parts I enjoyed the most were mainly related to Clid and his interactions with Belu and other characters.

That’s not to say the gameplay isn’t fun, but more to say that the narrative within this small indie game falls under being both predictable yet entertaining, and even sometimes surprising.

Clid and Belu are extremely charming, their characterisation complemented by well-written dialogue, unique bug voices, and design, although Belu is just a ball of light on that front. Still, it didn’t stop her from being memorable all the same. It’s because of the two protagonists that you’ll want to see the game through until the credits, though it’s not an entirely smooth journey to get there.

It’s Better Than A Fly Swatter

When I got to hear the developers speak about the game and play it earlier in August, my initial reaction to the combat and core gameplay was positive. I only got to play the first level, and did so with a pre-selected set of weapons, not all of which would be available to me at that point in the game.

This is a perfect example of why previews are not reviews, because in the preview, combat felt fun as I was switching between the various weapons. In the full game, you have to gradually build up to filling out your weapon wheel, which means your experience until you’ve acquired enough weapons is in fact a lot less fun than expected.

Your blaster has infinite ammo, but your other weapons don’t, so many of the earlier challenges dwindle down to just using your blaster for the majority of it since you’ll run out of ammo elsewhere. Also, after you do pick up some ammo, you’ll need to make sure you equip in and reload, since simply restocking, even at a vendor or between levels, won’t reload each weapon.

That was unfortunately a big reason for me not really using my full arsenal the whole game. I knew I had ammo, but if I didn’t remember to reload a weapon before entering a fight, many a time I was just unable to fire off that critical shotgun blast that would’ve prevented my untimely death.

The risk just wasn’t worth taking when you’re being surrounded, because the animation to reload takes much longer time to complete than the animation of an enemy’s attack. It’s just such a small thing with a big effect that feels like a mistake rather than a design choice in 2021, especially when the entire game is short enough that I didn’t really have time to get used to it.

Animals, Slugs, And Other Bugs

Over the course of the game you’ll meet various other animals and bugs within this world at different citadels, each with their own way of life and morals, but while the environment and NPCs might be different. not much else usually is.

In fact, if not for the narrative charm I mentioned earlier, Clid The Snail would be a much blander game since each level is basically the same thing repeated. You’ll have a couple of general waves of enemies and combat encounters, then a puzzle, some more combat, take out the slug lair and go home.

If anything, it’s the lairs that are the most egregious issue; everything else can be forgiven since the puzzles are at least somewhat unique, and able to walk the line between fun while mildly challenging well. Each lair is the same: you face waves of slugs, then do as much damage to the core of the nest as you can until the next wave of slugs is done with the hair and makeup departments and are ready for battle on screen.

The difference in the kinds of enemies you face and length of the waves and environment at each lair do little to make any of them stand out, and they all just become a blur. The last few “bosses,” if these lairs can be considered as such are actually quite fun, but they’re too little too late.

I feel like I should say that combat can be fun, as absolutely blowing enemies to pieces with a fully charged blaster shot never got old, nor did it with the shotgun, and the SMG felt really great to use. Those fun moments are just consistently interrupted by issues I discussed earlier, and the almost monotonous nature of each levels final encounter.

It’s A Clash Of Vibes

Monotonous feels like a poor way to describe a shooter, and it is, but I don’t use it because the guns felt boring to use and enemies felt boring to shoot. It’s because entering combat felt the same as walking around. The music almost never changes in regards to the situation, most of the game is played with a gentle but dramatic backdrop and it never felt like it fit.

While it was fine in regards to the narrative and the cutscenes – especially in those dramatic moments when we start to discover more about the plot – it wasn’t ideal for facing intense swarms of enemies coming at you while you’re turning them all into the size of a two-bite brownie.

The vibe of the music and story clashes so heavily with the gameplay that I was overjoyed when, on the last few bosses of the game and towards the story’s climax, the music changes to more fit the vibe of what’s happening on screen.

I’m sure there’s someone out there who prefers to put their headphones on a play a soft classical piece of music while they sit and play intense shooters like DOOM, but I am not one of them, and if you didn’t think the music in shooters was important, than this is a perfect example of why it is.

Clid The Snail is by no means a perfect game, but it’s still one that I would actually recommend you pick up. Perhaps it’s just me, but I really enjoyed the setting and the characters so much that I was more than willing to play through the issues I had, I never felt like I was forcing myself to the credits because I was having a degree of fun just by hanging out with Clid and Belu.

What solidifies the narrative so much though is the ending, tragic though it may be, it’s in line with the charming yet very cruel world that Clid lives in. If not for that and my enjoyment of the characters, it would have been more difficult to look past the game’s issues.

Having said that, I still recommend Clid the Snail because I think there is fun to be had here and fondness to be found within the game’s message and characters. All things considered, for Weird Beluga’s first at bat, Clid The Snail feels like that special first indie game from a developer that wasn’t all the way there, but showed plenty of potential and promise.

The scope of the art design and level design alone are enough to make me excited about whatever their next project is, and they clearly have a knack for strong thematic stories and characters.

Clid The Snail is now available on PS4 and PS5 through backwards compatibility.

Clid The Snail is a charming indie game with characters that you can easily grow to love just by spending time with them, and a narrative that is entertaining and consistent all the way through till the end. However, its gameplay issues and the clash of two very different vibes pull you out of those fun moments constantly, and you're left reminded of all the game's shortcomings all over again.