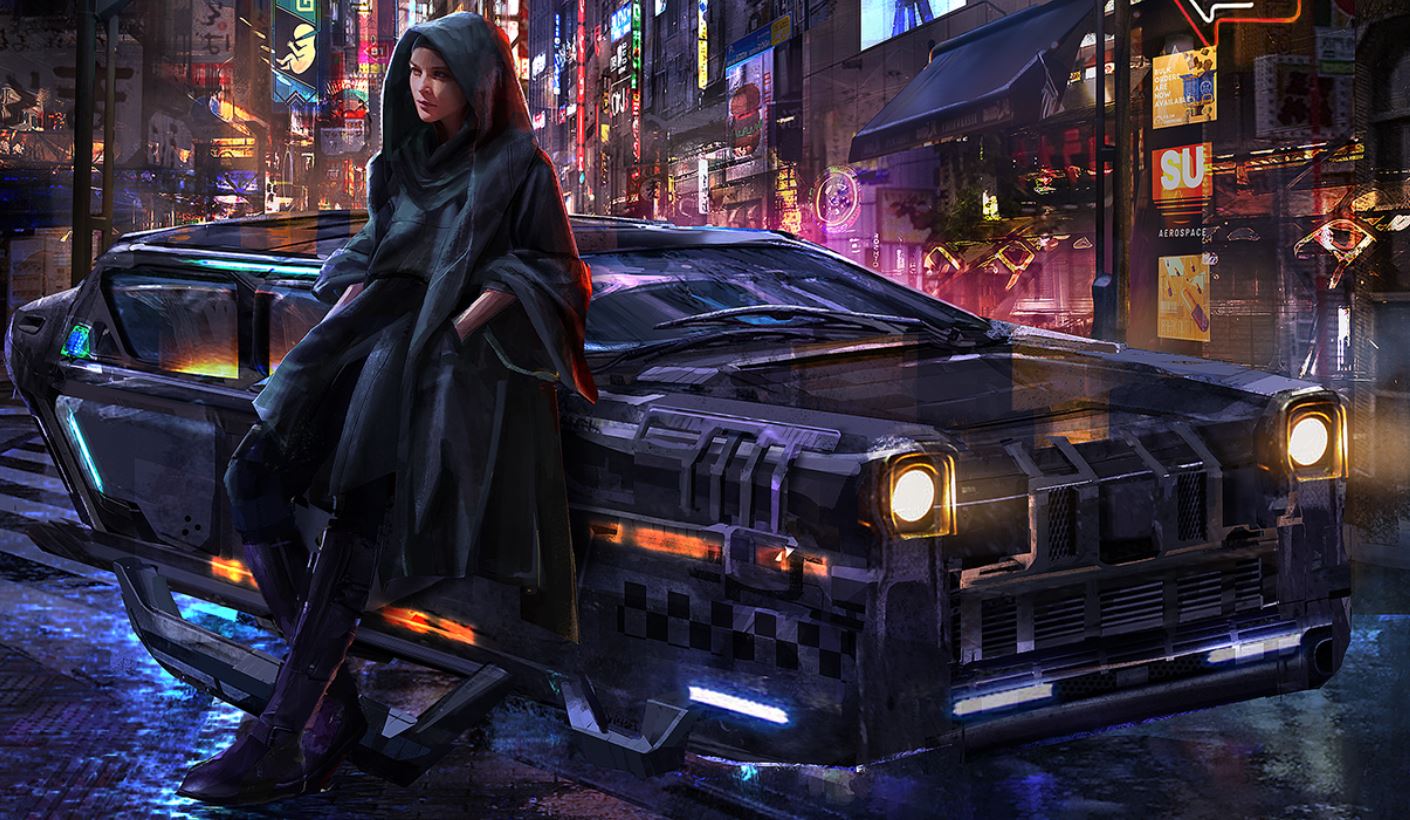 Cloudpunk PS4 Review – For as pretty and visually stunning dystopian cities can look, often what grabs you the most and sticks in your mind about these worlds is the horrible, yet fascinating stories of the people who live in them. Cloudpunk is no different.

Ion Lands’ newest title drops you in a mist and fume-filled city to do one thing: drive from A to Z and deliver packages. But, what makes the game successful in its goal is the people you meet on those journey’s, the anecdotes you are told about life in the city of Nivalis, and the horrible, Capitalistic intentions behind it all.

A City Consumed By Smoke And The People Suffering Underneath It

In Cloudpunk, you play as Rania, who has just moved to the capitalist-engulfed and neon-painted, fumed up city of Nivalis. In order to make rent and live in your tiny apartment, you take up a job with the illegal delivery driving company, Cloudpunk. The entire game takes place on your first night of being employed and you kick off you journey talking to ‘Control’, your handler from Cloudpunk, offering you deliveries to take on and providing you with nav points to drive your flying car, called a HOVA, to.

As the night goes on you start getting offered deliveries that are a little out of the ordinary. What begins as delivering a ticking package or transporting people across the city’s districts and dropping them off quickly turns into a narrative around A.I. and the people of a city — whether to leave them as they or transition them into a new era.

In all honesty, the narrative, although engrossing (and offering a final payoff that I felt was worthy of the driving I had endured), doesn’t manage to stand up to the stories of the people you meet and the excellent sci-fi writing built into each and every character you talk and interact with.

Whilst you are on these deliveries, you will sometimes pick up or deliver packages to a wide selection of characters, all of which have experiences that have shaped their lives and got them to the place they are at today. These characters and the stories they have to tell are the real meat and potatoes of Cloudpunk.

Every single character you can talk to in Cloudpunk is voice acted, including throwaway individuals like merchants and checkpoint guards. This means that each of their stories is effectively told to you through some of the best voice acting I have heard from a cast in any indie game ever.

And, those stories vary from the mundane to the absolutely absurd. For example, early on you have to transport a package, which has a man’s head in it. This man can still talk and is called William. You then discover that the reason you have is head is because you are dropping him off at a several-thousand-floor-skyscraper so that he can be attached to an android and start his new life as a janitor in this building, all so he can achieve class mobility and get out of the slums of Nivalis.

Another example is you are sent to deliver a package to a Mr Anderson, only to find that the building you are delivering it to is filled with Androids who are all called Mr Anderson and were built by the original Mr Anderson to work 24/7 without any breaks. Furthermore, the dialogue and comedic timing from Rania and each of the Mr Andersons you speak to is excellent and performed to perfection.

These are only two small anecdotes from the dozens of people you meet and deliver to throughout the 10-hour campaign, with even more stories to discover around Nivalis and I am sure each of them will be just as good.

Choices To Make And Connections To Form

Crucially, the deliveries you make aren’t always travelling from A to B. Before you travel to where you need to go, you might be given a choice on what to do, such as reset the Mr Anderson’s mentioned above and have them continue to work or leave them to their own devices after they find out that there is a world outside the workplace they are confined to.

That is a very small choice, but there are much bigger and more important ones deeper into the story that will have repercussions towards future events and certain situations will be completely wiped out if you choose to go down a specific route. But, I won’t mention them because they are best experienced with no spoilers.

As you make these decisions and progress through the campaign of Cloudpunk, the heart of the experience Ion Lands has created begins to show with how you form a connection to the characters you see repeatedly and those that are by your side throughout the entire game. Rania’s pet dog Camus has now been uploaded to your ship’s A.I. as an Automata and is your delivery partner, perfectly bantering with Rania and also dropping hints at the life both of them had before they were forced to flee to Nivalis.

Another great character is Control, your dispatch operator from Cloudpunk who you form a genuine bond with and is like no other character in the game, due to him being the only one that sympathisers with and connects with Rania, rather than most people in the city who have been swallowed up by poverty, capitalism, and misfortune. His story is a strong part of the conclusion of the game and it reminded me of some of the most emotional moments from Pyre.

It is the combination of the choices you make and the connections you make with the characters that really elevate Cloudpunk as an experience. Its sci-fi world and the people that inhabit it are its strongest assets and the game knows it, never wasting any moment. It reminds me a lot of Blade Runner, a sci-fi dystopia that lets you get a taste of the life there but leaves so much hidden or undiscovered that it only heightens the compelling nature of the product.

Nivalis also fits that description due to its unique neon-pixelated look, with character models and buildings being blocky and rigid, whilst the lights and neon highways help gloss over the simplistic look, creating a bold yet beautiful visual style.

The Day To Day Of The Job

When it comes to the gameplay of Cloudpunk, things definitely can get a little repetitive. Almost all of the game involves you driving to a location to pick up a package, parking your HOVA, getting out on foot, walking to the package, walking back to your HOVA, and then driving to the drop-off point.

There are pickups around the different cities, landing spots, and abandoned sites, such as Punch Cards, which lead to a special quest, and items, which can be handed to characters to learn more about them. And, whilst these do give you add another facet to the gameplay, I definitely felt the tediousness of a delivery driver’s job about five to six hours in. Luckily, the story picks up just after this and offers enough twists and turns to keep you engaged and allow you to push pass the gameplay, which can become monotonous.

However, from a control standpoint driving the HOVA feels fluid and precise and managing things like fuel and repairs add another element to the driving, forcing you to not speed past other HOVAs or crash into them like a madman.

Performance-wise Cloudpunk isn’t perfect. The game can suffer from frame drops, particularly when travelling and you spawn into a new area after taking a checkpoint gate. There is also a bit too much loading for a game that has you travelling around this much.

It can feel a bit annoying when you have to take three loading screens to get to a specific district of Nivalis, all to deliver a package for a quest which isn’t particularly engaging. But, on the whole, this didn’t affect my experience too much and it never made me want to stop playing.

An Experience Supported By Its Excellent Sci-Fi World

Cloudpunk isn’t without its faults, but the excellent writing, fantastic voice acting, and gorgeous world help to alleviate those faults and create a memorable journey filled with haunting stories to discover.

Every story is worth discovering and experiencing just to get a taste of the world of Nivalis and the inner-workings of this dystopia.

Cloudpunk is available now on PS4.

Cloudpunk is a fantastic sci-fi dystopia, with some great writing and voice-acting which helps bring the stories of the people of Nivalis to life. Whilst the experience can get a bit repetitive the excellence elsewhere ensures it is worth experiencing.