As genre and subject matters for video games go, few are currently as prominent and overused as the endless runner and zombies. So it seems inevitable that the two would meet at some point, and in Corridor Z, the inevitable has come to PlayStation. Straight away it is clear the game is going to need a decent hook to hang its tattered husk from so that it doesn’t get a rolling of the eyes from consumers and critics alike. Corridor Z attempts to add some vitality to a decaying genre, but can it do enough to make the game rise up like the shambling hordes that pursue you? Or is this particular mix a bullet to the head? I promise I’m out of zombie puns for at least two paragraphs.

The thin (not that it has to be anything else) premise to Corridor Z revolves around survivors of a zombie apocalypse locked inside a school during an outbreak. You pick from rag-tag trio that include a high school jock, a cheerleader and a stranded military man before entering the darkened corridors. There’s also a side story that shows up as a collectable, and it’s a nice addition to an otherwise routine tread through deadsville. Having some context to the running is appreciated, however one note it might be, it’s more than any other endless runners have bothered with.The chosen character will need to sprint through the corridors of the high school as they are hounded by fast-moving Z’s that get progressively quicker and stronger the further you get.

Being an endless runner, you have to time your movement to avoid obstacles and pick up collectables and power ups. You also get to create obstacles in order to gain a little distance between yourself and their gnashing choppers. These are mainly limited to pulling down shelves, lockers and ventilation ducts, with swift responsive usage, they can be the difference between life and death. Then there are the pickups, which also help keep the undead at bay. For the most part it’s a selection of upgradeable guns that pack limited stopping power and scarce ammo initially, but over time become essential tools if you wish to make good distances. You also pick up rations to further aid your cause by paying for said upgrades and other useful items.

You view this with a forward-facing camera, giving you a good view of how close the zombies racing for your flesh are, This presents you with a different problem of course, you rarely see what’s coming up in front of you until it’s practically within view of your character. While the only peril behind you is the Z’s themselves, the front holds the peril of sharp turns around corners. Time it right and you veer round the bend and continue running, get it wrong and well, you’re done for, the meat in a zombie and concrete sandwich. Having the undead always within grabbing distance does make for some intense moments, especially as the pace quickens and the ways of keeping them back grow lean. It’s a different kind of tension to the usual runner game, so credit where credit is due, Corridor Z has added something to the genre.

The initial experience is a tad confusing. A short tutorial (it is mere seconds) leads straight into your first run, and it is hard to know what the hell is going on, so inevitably, you perish pretty quickly. It takes a few tries to begin to fully understand the rules of this runner, and while it’s nice to not be spoon-fed every detail, it does feel unnecessarily confounding. The controls are both on the Vita’s touchscreen and on the face buttons, and that makes for a slightly fiddly experience, as neither work brilliantly. Firing a gun, for example, by tapping the screen is quite literally a hit-and-miss affair. It almost seems like pot luck as to whether or not you hit the undead. You get given mini-objectives that you need to complete in order to survive a day. These range from running a certain total distance to procuring diary pages on your run. It’s standard runner fare, dressed up a bit for the setting, but this is what is needed to pad out what would otherwise be a series of monotonous runs. You need to complete around four or five of these mini-objectives before the day is officially classed as over. Along the way this will reward you with coins to spend on new outfits, starting bonuses and upgraded weaponry for the later, tougher runs. That of course works in tandem with the the mini-objectives to produce that gameplay loop that’s essential for endless runners. One more run, one more objective, one more upgrade. That’s what you need in order to make things tick, and that loop certainly appears here, if not in any spectacular fashion.

Short burst gameplay suits the Vita down to a tee, hence why games like Corridor Z, that get ported from mobile, work so well on Sony’s handheld. You’ve seen it all before on Vita, it just came dressed up in different clothing. The likes of Jetpack Joyride and LittleBigPlanet spin-off Run Sackboy! Run! were good examples of how to do an endless runner on Vita, but the telling difference between those games and Corridor Z is that this game is not a Free-2-Play title. It retains all the trappings of a F2P game, bar microtransactions mercifully, and that’s a little at odds with the system. You still get cooldown periods for characters before you can use them again, meaning you could feasibly run out of available play time and have to wait. It’s never that long as you can switch to another while waiting for the last one to become available once more, but it does feel pretty unnecessary in a paid game. You could argue that it helps pad the game out, but that’s not really needed when there is no paywall to hit. 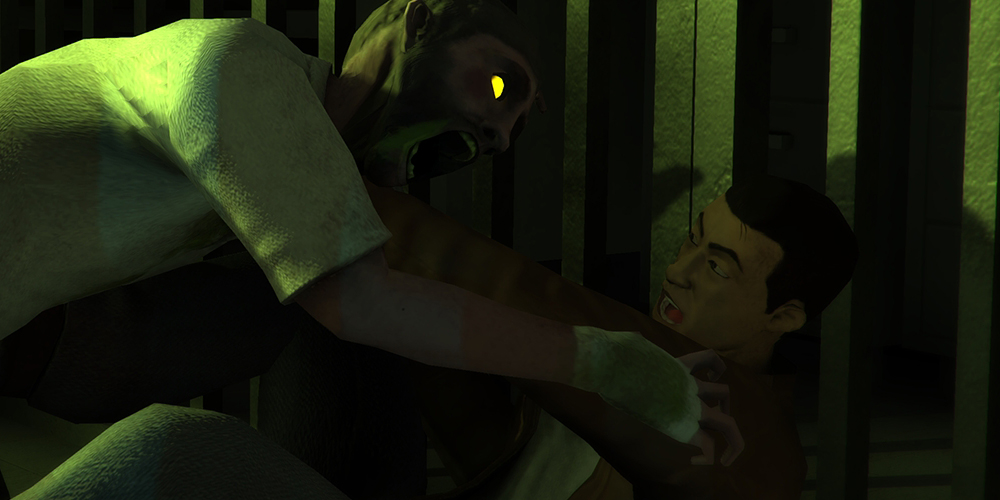 It’s a little perplexing. On the one hand you can cite it as a positive for an endless runner mobile port not to be riddled with microtransactions, yet on the other you could easily ask ‘what’s the point in it existing as a paid game?’ After all, the original mobile version is indeed the F2P model to begin with. This inner conflict makes much of what you’re doing seem futile and more than a little dull. Corridor Z is serviceable runner. Cliched perhaps, and lacking in anything that truly pops out enough (even the tense atmosphere brought on by being chased dissipates in time) to make it a wiser investment than any number of similar titles, but it isn’t offensively bad by any stretch. It does a decent job as a ‘dip in for five minutes’ kind of game, and at a fairly low price. Whether that price is needed, or indeed worth paying, entirely depends upon how desperate you are for a new fix in this genre. The answer to these questions is more than likely a shrug followed by a refrain of ‘not really that fussed’, and that makes for a telling statement.

Reviewer’s note: Corridor Z is also available on PS4, you get both versions upon purchase. Apart from looking a little better and having no touch controls, it is still the same game. Vita definitely suits the game better though.

An endless runner that at least dares to try some different ideas, Corridor Z still unfortunately remains very much stuck in the mud of its two overplayed tropes found in its chosen genre and theme. It is, however, still a fairly serviceable runner that’ll whittle away a few minutes a day for a short time.