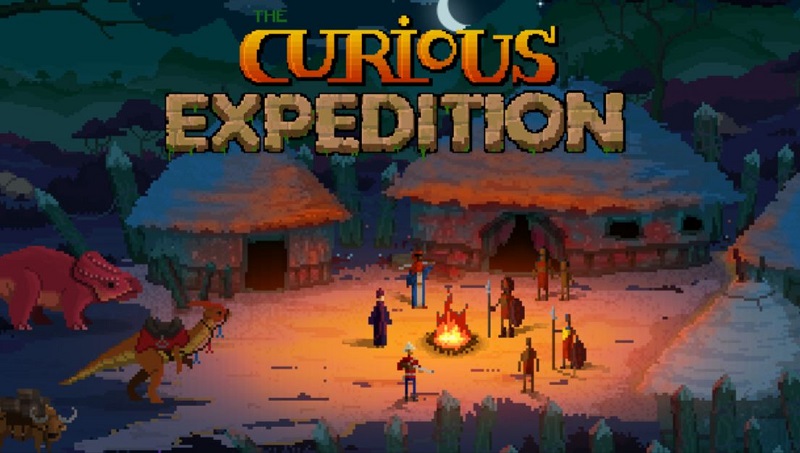 Curious Expedition is a wonderfully unusual little roguelike, that much is for sure. Whisking players back to the 19th century where so much of the world still remains unexplored, Curious Expedition tasks players with taking their pick from a selection of historical figures and setting off into the great beyond in the search of treasure, fame and glory. What’s key though, is that Curious Expedition’s distinctly lo-fi pixel-art aesthetic belies a game of incredible depth that though initially a little tough to get into, nonetheless soon turns out to be the sort of welcome time-consuming yarn that all of us need right now.

Picking from the likes of famous historical figures such as Marie Curie, Nikola Tesla, H.P Lovecraft and even Rasputin, Curious Expedition throws players out into a literal world of opportunity, as they seek out new cultures and infamy in their pursuit to be the greatest explorers known to man. However, don’t let Curious Expedition’s twee aesthetic fool you – this is a deceptively deep effort with sophistication for days (well, weeks and months really).

Viewed from a top down perspective, the goal in Curious Expedition is to pick a location on the map, head there, basically plunder as many riches as possible before discovering the Golden Pyramid in each area and then returning home to be showered in riches and praise. It sounds mercenary certainly, but there is a competitive element at play here as other explorers in other parts of the world are trying to do the same as well, all in the pursuit of fame and glory.

Luckily, you’ll always have a rough idea where the Golden Pyramid in each expedition lay thanks to a handy compass that points to a broad area where it can be found. That said, you can improve the accuracy of the compass by simply exploring more of the map, and it’s very much that sense of discovery that sits as the cornerstone to Curious Expedition’s compelling nature.

Exploration however, comes at a cost. At the top of the screen is a sanity bar which depletes as you move around the map but can be restored by resting at villages, outposts, towns or camps. Additionally, consuming food has the same restorative effect too, whereas other items in your inventory can be used in combat or for trade which I’ll get onto shortly. Should your sanity hit zero however, rather than causing instant failure, it results in members of your group losing their minds which can lead to them leaving your group entirely if you’re especially unlucky.

In every expedition you’ll want to target native villages first, as these bustling little hubs of civilisation are often hotbeds for trade, opportunities to rest and the ability to recruit wide-eyed villagers to take on the journey with you. Encountering villages also brings another of Curious Expedition’s key mechanics to the fore, namely the idea of your standing among the locals.

If you help out the native folk, trade with them and respect their customs and beliefs, your standing will increase – making your trek through their territories much easier as a result. If on the other hand, you steal their idols, insult their culture and generally act like a complete ass, your standing will swing in the other direction, causing the inhabitants of the land to act with hostility towards you and preventing you from resting and trading at their villages.

It’s here that a neatly engineered risk and reward dynamic comes into play too. When you stumble upon a shrine within an expedition area, these key locations are stuffed with shiny treasures that will increase your fame back home, but make you public enemy number one with the natives (hence my earlier comment about stealing idols and being a complete ass).

Interestingly, who choose as your explorer at the beginning can directly affect how things play out during each expedition too. Rasputin for instance, has a bonus to recruiting new followers to his cause, while Chinese folk hero Huang Fei Hong has a bonus to medicine. Again, it’s just one more way that Curious Expedition puts events in the hands of the player to control their own destiny.

That previously mentioned risk/reward dynamic is deepened yet further still by the fact that reliving a shrine of its treasure can also result in ancient curses being set off, such as plagues of locusts, rapid flooding and the classic Indiana Jones style volcanic outbreak.

The entire map is procedurally generated too, so you’ll never run into the same map layout twice. What does become slightly repetitive though are the different places you’ll encounter as you’ll certainly see some of the same tomb and abandoned camps repeat themselves over and over. Where the roguelike part comes into Curious Expedition’s design DNA, is that as you complete each expedition you are given a perk that you can take with you onto future expeditions, such as a reduced move cost when crossing hills or extra dice to use in combat.

As such, Curious Expedition always provides ample incentive for players to return to its globe trotting escapades. Also, once each expedition has been completed, you can elect to auction your loot for additional funds, or, you can offer patronage to the museum by gifting your hard won plunder. What also makes things more interesting is that before you set off on your expedition, you can be given special challenges that if fulfilled result in extra fame being dealt to you – such as completing an expedition in 80 day for example.

Encouragingly, each expedition can be completed relatively quickly too – making the game especially suited to quick five or ten minute sessions of play in a way that not too many games seem to be partial to these days.

Given that the thrust of Curious Expedition is exploration and making new discoveries, it makes complete sense that progression is tied directly into these concepts as well. Once you’ve discovered all the locations within a region, you’re given a single region point which can be used to improve the rank of one of the units under your control, resulting in a more effective unit who is also that much more loyal to you as a result. Basically, the more you explore the more you benefit – but these lands are stuffed with threats from hyenas and tigers to raptors and some enemies of a somewhat… mystical nature.

Combat is turn-based through the use of dice where the idea is to roll special combinations of dice in order to wound your foes, until you’ve run out of dice and it becomes your opponent’s turn. The number of dice you have available is entirely dependant upon the level and skill of the people on your team who are attacking. For example, rolling and keeping the mind and shield cards creates the Tactical Advantage skill which increases your defence stat.

It’s an odd little system, not least because it makes no attempt to hide its tabletop style origins, but beyond the RNG of it all, there is a surprising amount of strategy to be had. Much more than just the dice on the table, conflicts are often won by having a combination of the right sorts of soldiers mixed in with correct perks, gear and other such considerations. Of course, you can always evade conflicts altogether which, in most cases, should be the preferred option.

A wonderfully accessible take on exploration and discovery, Curious Expedition is one of those great roguelikes that you simply cannot put down. Sure, it might get repetitive at times, but ultimately this is one trek that everybody should take.

Despite its repetitive nature, Curious Expedition is nonetheless a highly accessible and thoughtfully constructed roguelike, where tactics, discovery, decision-making and luck all meld together beautifully into a charming pint-sized adventure.