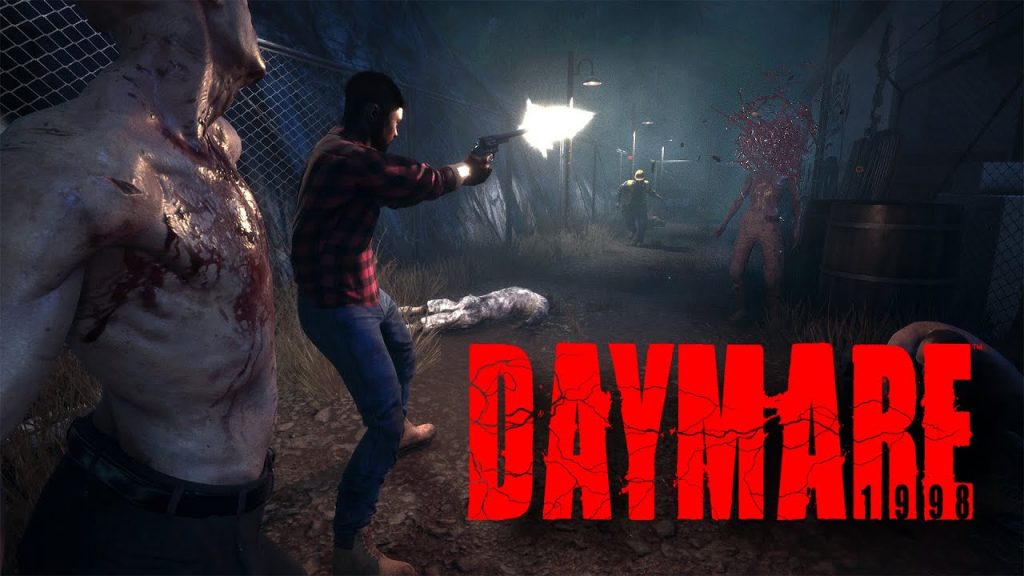 Daymare 1998 is designed as a love letter to classic survival horror titles. Developed by Invader Studios, Daymare 1998 takes a lot of cues from past titles but ends up implementing more of its own ideas rather than staying true to classic survival horror games. Though the game has its cheesy voice acting and some bad writing, you can’t really say it’s bad when it was probably designed to be that way.

The story of Daymare 1998 follows a chemical gas outbreak in a small town which has turned people into monsters. They act like zombies but they never bite you; instead they just throw up on you. A cleanup crew is sent to the lab to destroy any evidence of the gas, eliminate all employees, and secure a sample of the dangerous chemical.

Of course, things don’t go according to plan and all hell breaks loose. Daymare: 1998 follows the story of three characters as they try and survive the outbreak. Although there are different perspectives on the events from all three characters, I never really cared about the story of the two clean up operatives. The third character, Samual, is the most interesting of the three.

I won’t spoil what Samual’s motivations are, but his story elements intrigued me the most. Samual suffers from some serious hallucinations which he takes medication for. Throughout the game, Samual has these hallucinations where he would see some crazy things. Some enemies appear as hallucinations as well, forcing you to waste ammo on enemies that aren’t really there.

These hallucinations remind me of moments from F.E.A.R. where Alma will randomly appear and disappear. They aren’t as subtle as they are in F.E.A.R., as the screen turns a blood-red when it happens in Daymare, but these moments are pretty damn creepy when they happen. I just wish there were a lot more of them.

Inspiration Around Every Corner

Although Daymare: 1998 is a horror love letter, gameplay-wise it never feels that way. The camera is over the shoulder, which is more akin to modern titles rather than utilizing fixed camera angles, but that’s not to say that it doesn’t show its love, not just for survival horror games but video games and movies of the 90s.

When it comes to gameplay, though, Daymare: 1998 arrives three years too late. With titles like Resident Evil 2 and 3 Remake already released, Daymare feels very dated. Combat is competent enough and killing whatever these monsters are works just fine. But it looks and feels like it’s behind the times in 2020.

Facing off against the monsters can be fun and tense as they all move at different speeds. The slow ones don’t present much of a challenge but the quick-moving ones will get you sooner or later. The zombie monsters aren’t just the only enemies the chemical has spawned. I found myself facing off against a big fast bald monster who’s kind of terrifying when it charges at you from a dark hallway.

Another monster is an acid-spitting foe that I despised going up against because it takes way too much ammo to take down and also explode when they come near you potentially killing you in a single blow.

Another cheap blow the game delivers is putting monsters right around almost every corner. I can’t tell you how many times I got attacked and how much health I went through just because some random monster is hiding behind a corner that I go around. Another cheap trick is having corpses wake up a few seconds after you walked past them. Most of the time they don’t even make any noise and all of a sudden I get grabbed from the back and spit on with bile.

One of the biggest problems that I felt hindered the game is its inventory system. Item management is a hassle simply because there are so many unnecessary mechanics to deal with. Health items and ammo are things that are expected but Daymare: 1998 also adds stimulants to increase your defense, or give you better accuracy and faster reloading reflexes.

Most of these items I never used because every enemy outside of a handful throughout the game can easily be stopped with a shotgun blast. They took up space and are simply unnecessary in this type of game. Another stumble comes in the form of ammunition. When you pick up ammo, it comes in an ammo box, In order to use that said ammo, you have to have bullet clips. If you don’t have bullet clips, you can’t reload your weapon.

The massive problem this creates is that you constantly have to go into your inventory and combine your ammo box with a bullet clip just to have ammo to reload your weapon. You can create a shortcut to a second ammo clip to be able to reload faster, but you still have to go into the inventory to refill your ammo clips. You just won’t have to do it as often.

Another problem this creates is the various different ammo types you can collect for each weapon, taking up even more space in your inventory. Early on, I started asking myself if there was going to be some sort of inventory box to store items in. Thankfully, there is, but they are so few and far between I found myself dropping items or not picking items up just to avoid going out of my way to find an inventory box, which I should add are all hidden behind secret walls.

A Terrifying World To Explore

Easter eggs clutter the world. From random parody posters for movies like Scream and Terminator 2, all the way to signs and graffiti scattered across the game. Spray paint with text that reads “Snake Plissken escaped from here.” And even finding the infamous chemical mixture from the original Resident Evil to destroy Plant 42. The love and homage are definitely there. A lot of them are even tied to Trophies if you find them as well.

Another interesting aspect of Daymare is the use of a real-world PC to read some of the documents in the game. By going to a special website and searching for specific files the game mentions to you, you can read these files. It’s not a necessity to do, but I found it quite fun.

Daymare: 1998 isn’t the prettiest game either. I don’t know if it was done on purpose to resemble older games, but it looks like a mid-gen PS3 title. It’s also a very dark game. I had to turn up the brightness and contrast quite a bit.

Sound design, on the other hand, is quite good. The monsters moan and groan as you would expect and the tense yet atmospheric music adds a lot to the creepy locations you get to visit.

Daymare: 1998 Is a decent game that just released a little too late. It’s a great alternative to the Resident Evil Remakes which seem to be the dominating titles of the genre right now. Some of the design decisions probably should have stayed in the pre-production phase of development, but overall it’s a decent title with plenty of atmosphere.

Daymare: 1998 is a great alternative to the Resident Evil Remakes. Though it feels a little dated by today's standards, it nonetheless ends up holding its own with some great atmosphere and exploration. It's just a shame a lot of its mechanics are unnecessary and quite honestly questionable.