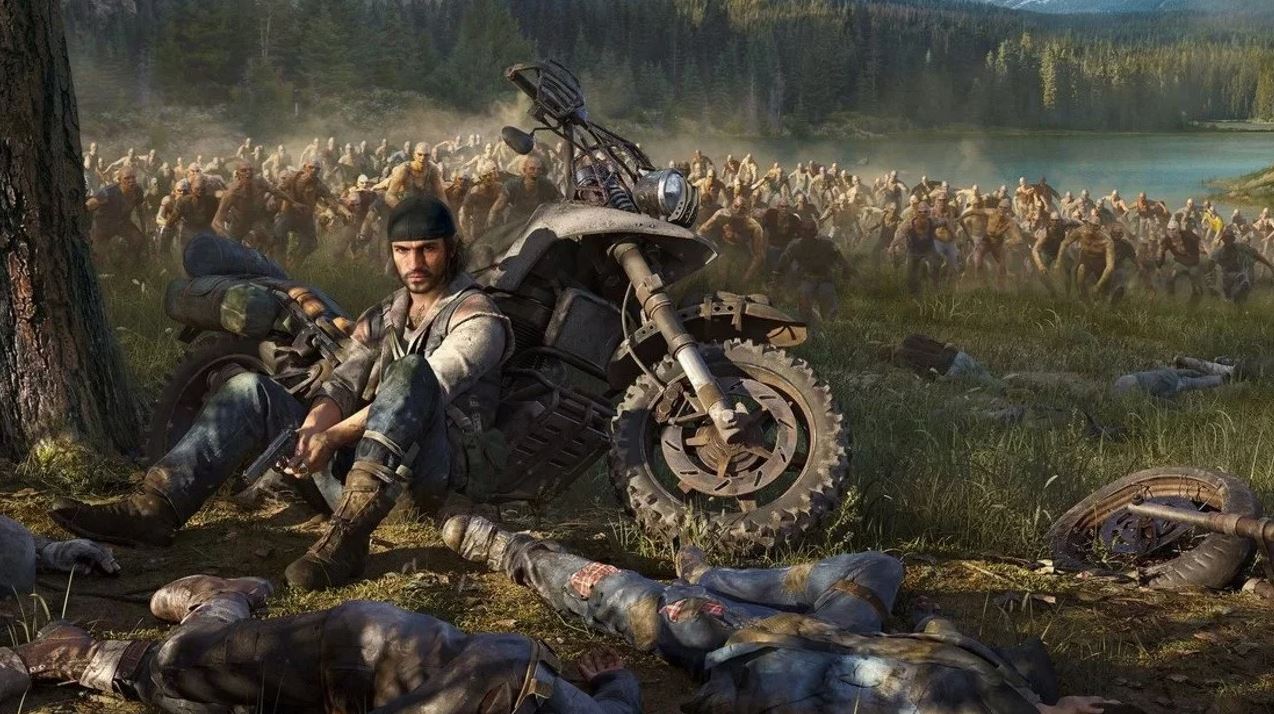 As if gnawed by one of its Freakers into a twisted, crimson-dripping facsimile of the Days Gone we saw at E3 2016, the game that we have in our hands now bears scant resemblance to that spectacle filled, zombie epic that we were first exposed to all that time ago – or at least, that’s how it seems in the early going. The truth of the matter however, is that Days Gone does an unexpectedly commendable job of pacing the reveal of what is arguably one of its signature attractions, rather than overexposing it and making players numb long before the game reaches its conclusion.

The upshot of this however, is that Days Gone takes a while to properly get going and it relies on the fact that you haven’t exhausted your fill of traditionally engineered, open world design beats – a somewhat tall order perhaps given the rapid fire recent releases of Assassin’s Creed Odyssey and Red Dead Redemption 2 – the newly installed twin goliaths of the genre.

Days Gone is a gargantuan, combat-stuffed undertaking that has characters you actually care about

If we were dealing in broad, reductive strokes, describing Days Gone as Sons of Anarchy meets 28 Weeks Later really wouldn’t be too far off the mark at all. As gruff, heavily inked outlaw biker Deacon St. John, players must roam the still gorgeous post-apocalyptic landscape of rural Oregon, killing Freakers, killing marauders and killing cultists with a view to make it to the apparent safety of the fabled north. So yeah, there’s a whole lot of killing to be done in Days Gone.

And the killing feels hugely satisfying too. Whether it’s the squelch of a custom-made, saw-bat tearing through the guts of your shrieking foe or the meaty, fleshy tear of a knife stealth attack to the side of the head, Sony Bend clearly know how to make close quarters combat feel darn good. Sony Bend have also ably engineered violence at a further remove too, with gunplay that is suitably palpable across a wide range of different firearms that all feel good to use and even better to blast bad dudes away with.

Though there is a substantial amount of putting folks in the ground in Days Gone, it was a little surprising to discover that the game also has a deeply emotional core too, and one which is ably anchored by decently written characters that are in turn matched by great performances from their actors. While Days Gone might seem like a typical post-apocalyptic jaunt around Zombie Murder Land, much of the character and humanity comes from the characters simply wanting to claw back something of what came before, of the Days Gone.

Nowhere is this sentiment better ensconced than in Days Gone central protagonist Deacon St. John. Motion captured and voiced with conviction by Sam Witwer (he of Darth Maul fame, primarily), Witwer lends a nervous fury to St. John that in turn is underscored by a grim determination to locate his wife, Sarah, and protect his old riding buddy, Boozer, from falling into his old ways. It’s a superb performance that ranks up there as one of the best motion captured performances in a game to date and one that really comes into its own when the heart-wrenching moments start piling up.

Though the story lags when Deacon or his close pals are not together in the frame, for the most part it acts as a more than compelling vehicle to keep players invested in Days Gone open-world playground of violent delights. Speaking of which, Days Gone is an absolutely *massive* affair, that easily clocks in at close to 100 hours in length. If you’re looking for bang for your buck, Days Gone delivers and then some.

The fact that the open world in Days Gone is so big acts both as a boon and also to the detriment of the game depending on where you are in terms of genre burnout. As mentioned at the top of this review, the release of Days Gone comes hot on the heels of Red Dead Redemption 2 and Assassin’s Creed Odyssey – two absolutely massive and genre defining efforts which competed for GOTY honors late last year.

Not only does Days Gone lack the RPG stylings of the latter, but so too does it omit the painstaking attention to detail of the former too – essentially putting Days Gone in an unfavorable position when compared to either title. Perhaps more significant is the fact Days Gone leans very heavily on the traditional pillars of open-world design; seemingly trite collectibles litter the world, side-missions crop up everywhere and checklists of stuff to be done lurk menacingly in the corner of the map screen.

As such, if you’re completely burned out on the genre than Days Gone will struggle to do much for you – especially in the early going when the game takes a little while to find its feet. Beyond its almost religious adherence to the contemporary open-world template, it also encompasses other, more familiar elements that are synonymous with that formula too.

Crafting is a big part of Days Gone and unfolds pretty much as you’d expect. Scrap can be foraged from cars (though be wary of alarms for obvious reasons), and a range of other consumables such as kerosene, rags, bottles and other stuff can be used to fashion everything from bandages and health boosting pills through to a selection of distractions, explosives and traps. The act of crafting is handled deftly too – an intuitive radial UI allows you to craft items very quickly and the on move with little effort.

Uniquely enabled by the massive, iconic chopper style bikes that have long been part and parcel with the marketing of Days Gone, riding and drifting through the gorgeous Oregonian countryside proves to be an evergreen thrill; the two-wheeled mechanical wonders boasting a beautiful sense of weight and momentum as you swing them around corners and heft them up and over towering hills. These bikes require fuel and maintenance too, adding an additional level of consideration to matters as you scope out petrol stations to collect precious gas, while scrap and camps can both be used to keep your bike in tip-top shape.

For those who are willing to persevere with Days Gone ultimately mammoth undertaking however, and have the requisite long-term stamina to do so, there is much to like – the combat is satisfying, the characters and story are largely well-written. However, it’s really in the Freakers which serve as Days Gone almost omnipresent antagonists that developer Sony Bend do some of their best work.

There’s more to the Freakers than meets the eye

As removed from the typical, lumbering undead as they possibly can be, the Freakers in Days Gone are much more akin to ‘Ragers’ as seen in the 28 Days and 28 Weeks Later movies. A horribly realized bunch – all shaky muscle spasms, guttural screams and seemingly inexhaustible sprints, the Freakers actually represent a wide group of life forms that have been mutated by the disease, and as such, offer far more variety and nuance than you might infer at first glance.

Stronger at the night than during the day, Swarmers are the standard and most common variation of the Freakers that you’ll meet. Twitchy and driven by acute senses of sight, sound and smell, they tear towards Deacon with seemingly reckless abandon, eager to rend him limb from limb. There is a level of understated nuance to their aggression however, as many Freakers often employ a very subtle dodge at the last second, akin to a boxer rolling their shoulder to avoid an incoming punch as they avoid potential kill-shots destined for their skull.

Newts are the smallest and least troublesome of the Freakers. Essentially children that have survived the mutation, Newts scamper around and won’t attack unless they feel threatened, or if they boast significant numbers to embolden them to do so. Either way, they have little in the way of health and can be vanquished with relatively little effort. Much more dangerous however, are the Screamers whose shrieks can attract bands of wandering Swarmers, and the monstrous Breakers; hulking mutated humans who soak up tons of damage and are able to deal it in return.

Elsewhere, mutated wolves and bears are another threat which must be contended with. Even at trucking along at speed on your bike you can quite literally be torn off your chopper when you least expect it by either one of these beasts, while even uncorrupted creatures, such as regular wolves and jaguars also pose a constant problem, too.

The biggest threat by far that Days Gone has to offer are the Hordes that have for many been an effective selling point for the game ever since it was revealed back in 2016. A sprawling, undulating throng of piercing screams, torn flesh and gnashing teeth, Hordes are an irresistible force of violence that sweep across the landscape, murdering everything in its path.

Usually numbering in the mid to high hundreds, and most often heard before you actually see them, Hordes require clever tactics, the establishment of escape routes and devastatingly advanced weaponry in order to be dealt with properly. From a spectacle point of view, when a Horde is glimpsed in full flow they are very much a sight to behold – either casually marching back to their nest like a column some sort of disciplined fighting unit, or spilling over the environment as they rush towards their prey en masse with violent intentions.

Though often beautiful, a smattering of issues marginally undercut the experience

Days Gone is a beautiful, retina-stroking effort for the most part. The Farewell wilderness and the lands which stretch beyond are gorgeously realized with picturesque rural sprawls punctuated by holiday homes and the newly encroaching destroyed beauty that the apocalypse has wrought upon it. Likewise, the character models are insanely detailed too and wonderfully communicate every nuance of the performance capture associated with them.

There are however, a few facets of Days Gone that could certainly do with improvement or omission altogether. The dreaded insta-fail stealth missions make a frustrating, if abbreviated showing in Days Gone, evoking the worst of Assassin’s Creed before that series went through its Origins enlightenment phase. Days Gone really doesn’t need them – at all.

Elsewhere, a handful of bugs and minor technical issues serve to frustrate. I’ve had my bike disappear through the floor on one occasion (resolved by a reload), enemies jump into the sky thanks to some nutty physics (which was funny), objects fall through the floor and the audio fall out of sync during the odd cut scene (which was less funny). Of course, such issues are outliers and do little to meaningfully tarnish the experience, but their mere presence serves to vex nonetheless.

Days Gone then, is not quite what we thought it was going to be when we first saw it. With its metamorphosis into a solidly enjoyable, traditional open-world action adventure with real heart now complete, it runs the risk of inviting comparison with the genre greats that it will not survive. It’s not a 10/10 game certainly, but still, for those whose stomachs permit another open-world meal of this magnitude, Days Gone proves to be quite the delectable, fulfilling banquet indeed.

Though a touch derivative and brought low on occasion by the odd technical issue, Days Gone is a sprawling and handsomely made open-world adventure that contains a surprising amount of heart and ample amounts of violence to match.