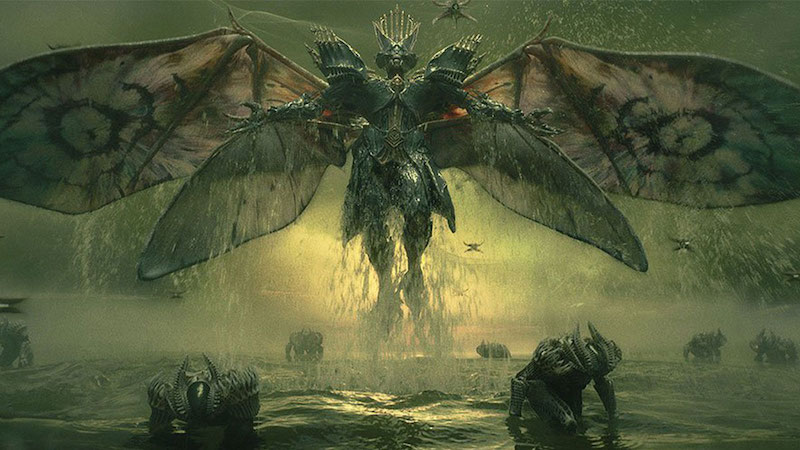 Destiny 2: The Witch Queen Review (PS5) – With every new expansion in Destiny, Bungie implements a new campaign, gear and weapons, and something else to change the status quo.

While past expansions introduced new subclasses, like Stasis in Beyond Light, The Witch Queen introduced more technical changes.

Weapon crafting, new Void 3.0 subclass changes, and Light wielding Hive have changed the game in surprising ways. Along with a campaign and seasonal content that dive into the lore of Destiny like never before, The Witch Queen is an expansion overflowing with content.

Eyes up, Guardians – everything is different.

More Than A Coat Of Paint

Not all changes The Witch Queen brings are part of the paid expansion. Some of the most impactful ones come free to all players and, on the surface, may seem like minor tweaks.

These alterations to the game include light-bearing enemies, a Legendary difficulty option, and a slew of changes to the PVP/PVE hybrid Gambit mode. While many of these changes can’t be seen, they can be felt.

And none more than the change to the Void subclass.

When Bungie introduced us to the fourth subclass of Stasis last year in Beyond Light, they also implemented a new way to customize and interact with our Guardian’s abilities.

Aspects and Fragments allowed each player to focus their Stasis subclass into something of their own in a more fine-tuned way than our original subclasses.

With the success of the Stasis format, Bungie’s set out to make each of the remaining subclasses feel just as in-depth. This update started with Void 3.0, which launched with The Witch Queen. 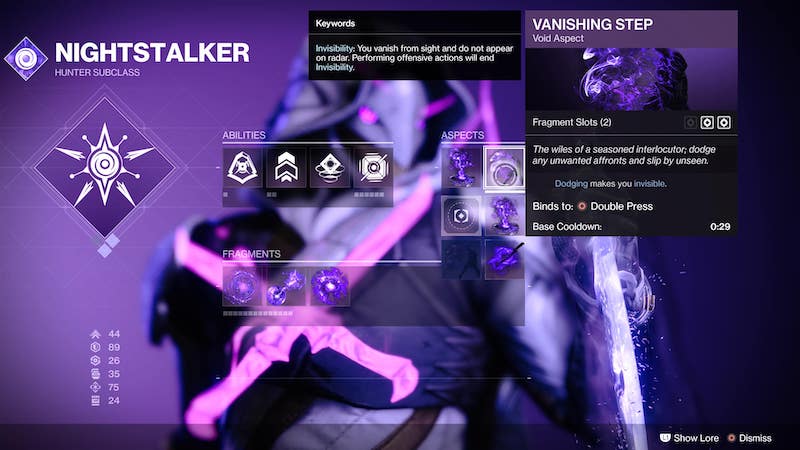 Like Stasis, Void 3.0 utilizes Fragments and Aspects, most of which were reworked from the previous Void subclass.

Veteran players who already had their Void subclasses unlocked before the launch of The Witch Queen will have access to many of the Aspects and Fragments automatically, with the remaining ones being purchasable from Ikora in the Tower.

New players, however, will need to unlock them before acquiring them. While the means of unlocking may vary, it allows for new modifiers to continually be added to the game, endlessly evolving each subclass.

Knowing how Aspects and Fragment differ, as well as what each one does specifically, will help you hone your Guardian into something of your own. In general, these are the differences between the two modifiers.

These can vary from gaining grenade energy back from melee final blows to a range of buffs to a Guardians Devour (Warlock), Overshield (Titan), or Invisibility (Hunter).

Mixing and matching these Aspects and Fragments, along with choosing a specific Void subclass super ability, allows for Guardians to truly customize how their character plays. This will only increase when Arc and Solor 3.0 are introduced to all players later this year.

Allowing us to customize our Guardians with Void 3.0 is only half of how Bungie is deepening the RPG elements with The Witch Queen. This expands past looking inward at our characters and into weapon crafting.

At the start of the campaign, we are called on by Ikroa and Eris Morn to head back to Mars to investigate a new artifact found.

It turns out that the disturbance is a forge of sorts called the Relic, which introduces a way to craft and customize weapons with perks of your choosing. 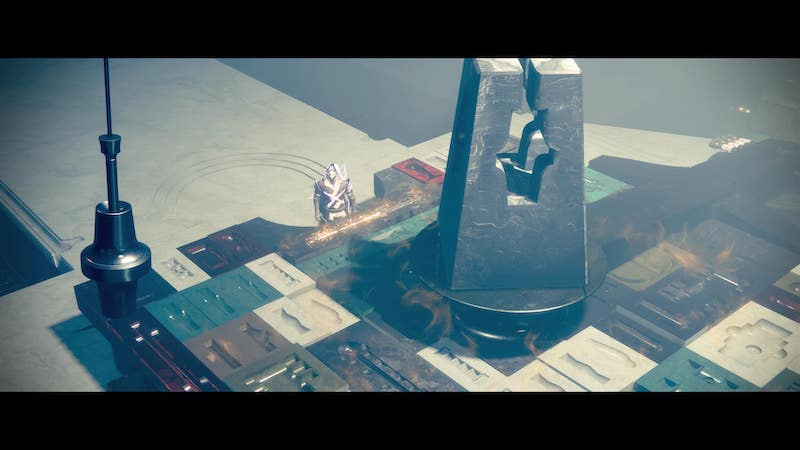 Weapon crafting is a complicated process, although a rewarding one. Grinding for the best-rolled weapons has been a significant part of the Destiny experience, and weapon crafting now even more.

To craft the perfect weapon you must first obtain the weapon in question as a random world drop, but it has to drop with Deepsight Resonance. Essentially this is a level progression bar that fills up by using the weapon.

Once leveled, you can craft the weapon. However, not all the perks will be available until the newly crafted weapon is leveled up and reshaped at the forge.

This new addition of crafting is the best type of grind for Destiny. Many steps require the player to put in a lot of effort and materials, but the reward is a weapon specifically designed for you. While you can now craft your perfect gun, Destiny also used the Relic to introduce their new weapon, The Glaive. 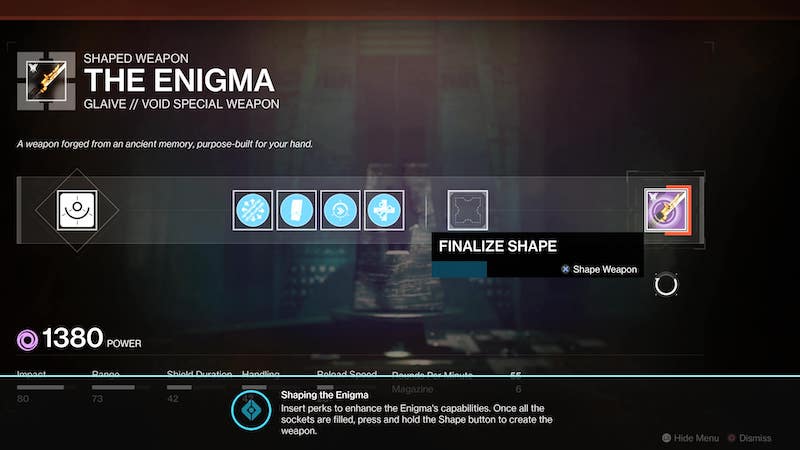 The Witch Queen has us make our first Glaive to introduce you to weapon crafting. It is an all-in-one first-person melee weapon that has Guardians get up close and personal with their enemies as we eliminate them.

This shift from the standard third-person makes the Glaive one of the most fun weapons in Destiny right now, and one that has me excited to run into a large group of enemies.

The Glaive is more than a mere stabby stick. As mentioned above, I would be excited to take out all the adds in the room with this weapon. Although with some stronger enemies, you don’t want to be that up close and personal while fighting.

Fear not, the Glaive is also a projectile weapon. Using energy ammo, the Glaive can shoot blasts from the tip using R2. This allows Guardians to be an all-in-one wrecking machine while their fireteam members watch in awe.

And in those moments you find yourself too close to that powerful enemy, you can hold L2 for the Glaive to emit a shield so you can survive and crush that Hive Ghost.

Bringing the Hive Into The Light

The Hive have always been our dark reflection, and in The Witch Queen, they are more than ever. It’s nothing new for our enemies to use the Light in the form of Void shields or Solar weapons, but Savathûn and the Hive took it to 11.

Lucent Hive, and Savathûn herself, now have Ghosts. The same Ghosts that made us Guardians back in the Cosmodrome. And Hive have never felt more threatening.

Bungie has been criticized for reusing old enemy types by changing their look and calling them something new. While sometimes true, the Lucent Hive are far more than a reskin.

They use Supers, revive, and even think like Guardians. Multiple times throughout the campaign, I found myself playing more similar to how I play against other Guardians in the Crucible rather than a standard AI opponent. 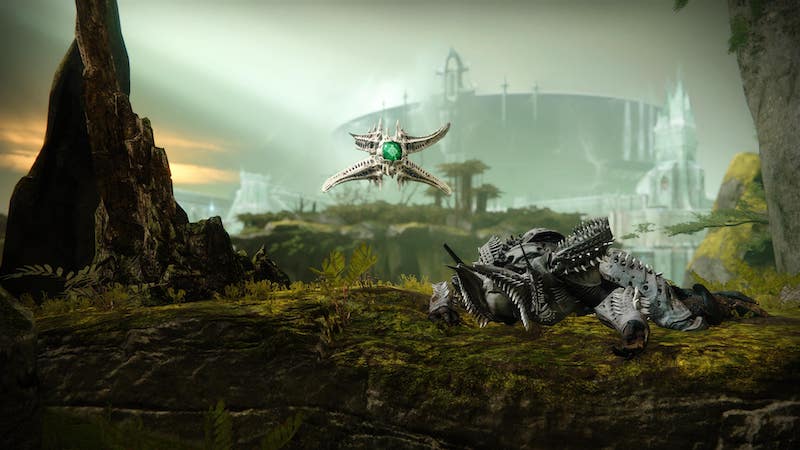 Saving my Nightstalker tether for when the Hive popped super so that I could suppress them and take it away, or knowing what to expect when I heard the familiar hum of a Blade Barrage were just some of the ways that Bungie tricked my brain.

Because of this, every encounter with them had a heightened sense of fear that Destiny’s PVE has never really given me.

Fear, and surprise in many cases, adds to the satisfaction of taking these enemies out. But be wary, since these Hive are Lightbearing, they can come back if their Ghost isn’t taken out in time.

Running up on the corpse of the recently fallen foe will get you close enough to its Ghost to grab it and crush it in your hands, one of the most satisfying sounds in Destiny. 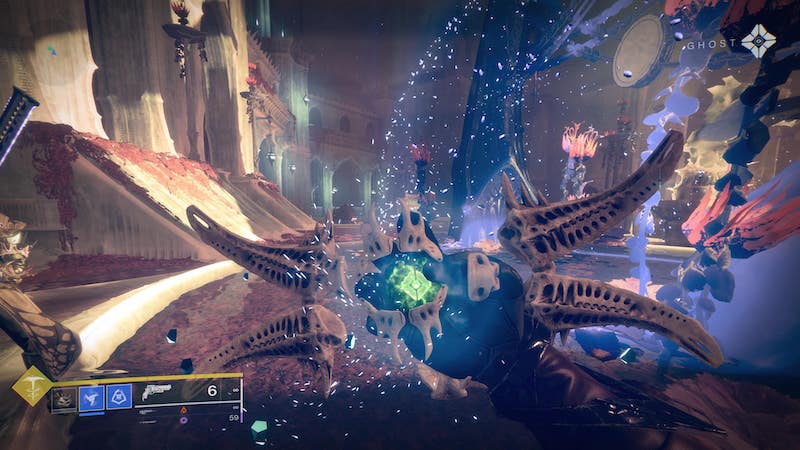 Bring The Lore To Life

When Bungie launched The Taken King in 2015, many considered it the turning point in Destiny. All aspects of the game got better; the gameplay, quality of the content, story, and overall reception.

This was the expansion that allowed players to fully commit to the shared-world shooter and dive deep into the history and universe Bungie created.

A significant factor was The Books of Sorrow, which is the history of the Hive and their gods. The origin of three siblings, Oryx, Xivu Arath, and Savathûn. 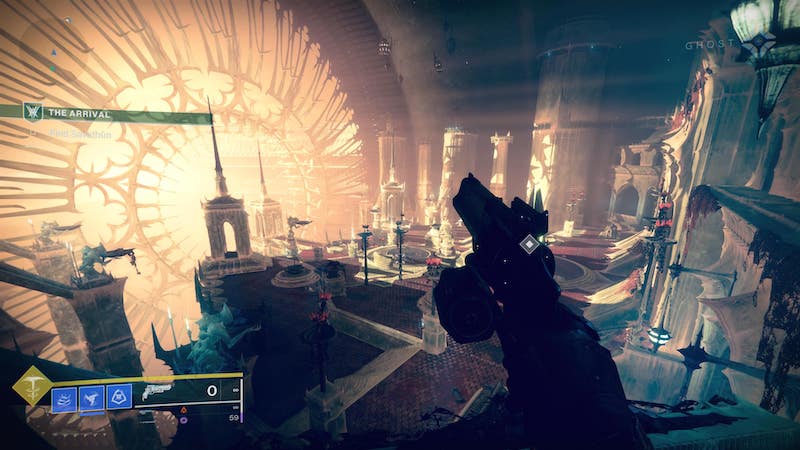 While the lore in The Taken King was amazing on its own, a lot of it went unread, as it was locked behind Grimiore on Bungie’s website. The Witch Queen fixed this by making these stories the campaign’s focal point.

From the Hive home-world of Fundament to how the Hive were created, The Witch Queen delivers a satisfying story to both hardcore Destiny veterans and newly added players.

As we learned in The Taken King, to defeat a Hive god, we must defeat them inside of their Throne World, the makeshift dimension they retreat to when killed in our reality.

It’s here they are truly vulnerable, so this is where we spend most of our time during the campaign of The Witch Queen.

In a bleached version of her brother Oryx’s, Savathûn’s Throne World is bathed in the Light she has stolen from the Traveler, allowing us to explore a radiant destination that gives off a distorted Disney-like appearance. 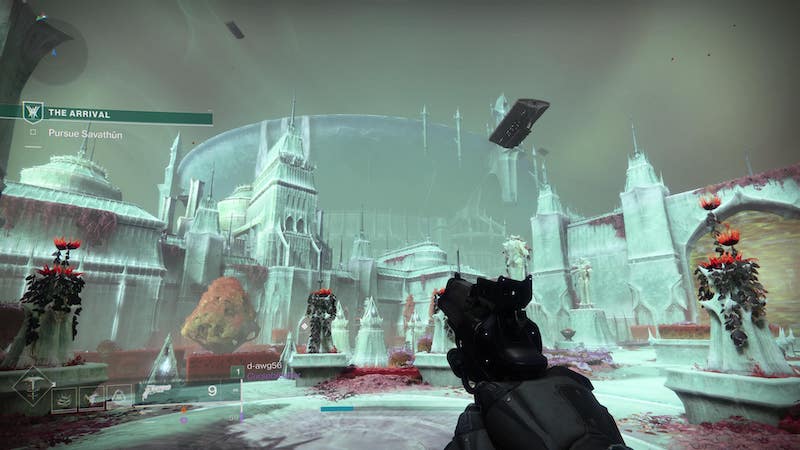 Surrounding the colorless Throne World castle is the swampland, a creepy and unique area that serves as our safe haven outside of Savathûn’s gaze.

The location as a whole is not only visually stunning and unique, but is one of, if not the, biggest locations I’ve ever experienced in the game.

Public events, Patrols, Lost Sectors, and secrets are scattered all throughout the Throne World. While this isn’t anything new for Destiny’s patrol areas, the sheer size and maze-like qualities of the Throne World make just running around and exploring something to look forward to.

Never has Bungie crafted a more perfect sandbox to play in.

A New Season Has Risen

Seasons in Destiny are often a complicated subject. Not because of the quality or subject of the three-month-long story, but because it’s a separate entity from the newest expansion.

During Beyond Light’s Season of the Chosen, we were introduced to Caital, the Empress leader of a large faction of the Cabal. We gained her respect and loyalty through combat throughout the season, and she became a reluctant ally.

Although this was a mid-year story, its fruits come to bear in Season of the Risen because of the events that start The Witch Queen.

From the first mission of the Witch Queen the story diverges into two paths; helping Ikora discover the truth behind Savathûn in the campaign of The Witch Queen and Season of the Risen where we aid Zavalla in smoothing out relations with Caital.

These stories, while separate and sold as such, intertwine to give us a full story never before seen in Destiny.

While past seasons helped players log on in a week to week to add value and purpose to weeks of Destiny. Season of the Risen invokes a sense that The Witch Queen story will continue thought the next three months if not the entire year. 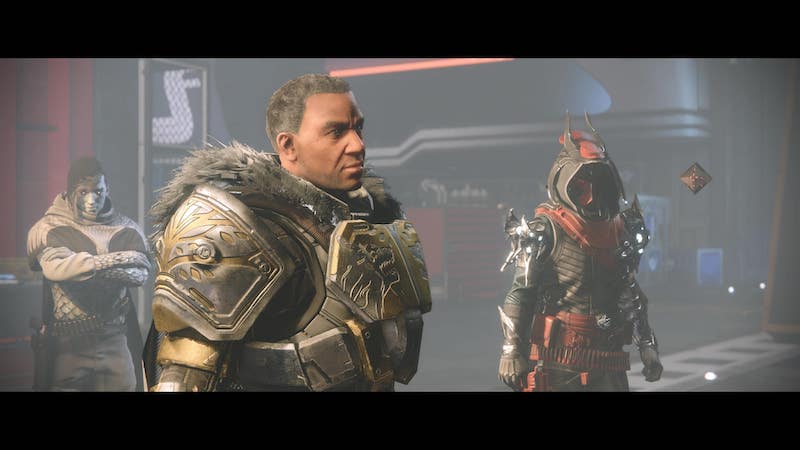 Trying to stay on topic was one of the hardest things I’ve had to do during this review. Multiple times I caught myself rambling and having to hone myself back in because there are just so many new and great things to talk about.

Destiny 2: The Witch Queen is the best expansion to Destiny 2, and maybe Destiny as a whole. The Taken King has been a benchmark in how many players gauge the new additions to this shared-world shooter, but the king is gone.

The highest compliment I can give any game is when I have to force myself to put the controller down to put my thoughts in a review. Destiny 2: The Witch Queen is that game. Somehow Bungie took a game that I play daily, for hours a week, and made me want to play it more. It's always good getting new content with seasons and past expansions, and I have loved all Destiny 2 additions. However, The Witch Queen feels like we have entered a new age. The Witch Queen has proven that no one is better than Bungie at what they do. The Witch Queen takes every aspect of Destiny and improves on it, and then some. While Destiny is always getting better, The Witch Queen is the best piece of Destiny content ever created.