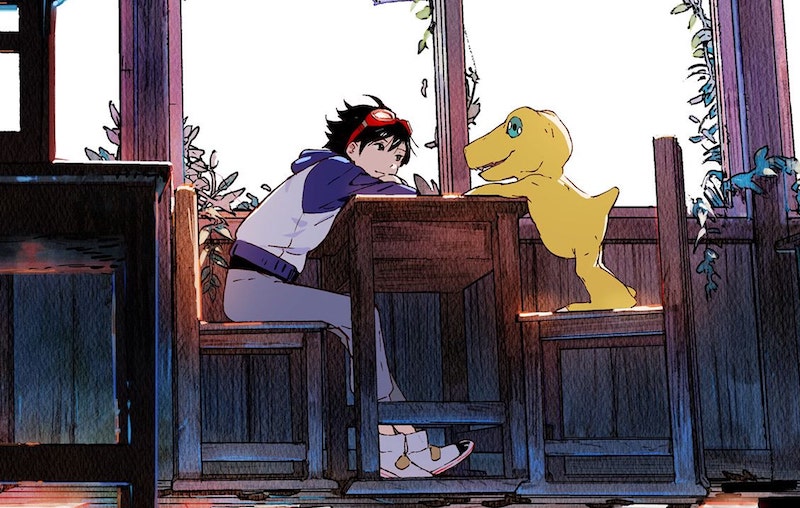 Digimon Survive Review (PS4) – Ever since I was a child, I have wanted to become a DigiDestined. Digimon Survive delivers on this feeling. Landing in an unknown world, meeting a monster you instantly have a connection with, and finding your way home.

For fans of the show, this may sound like a rehash of the anime, but Digimon Survive can stand on its own. From gameplay to story, this is a unique iteration of a franchise I love, and while it took some getting used to, something I fell in love with.

The Learning Curve Of Visual Novels

I won’t lie; when I first jumped into Digimon Survive, I wasn’t sure what to expect. While Digimon Survive is visually stunning, the lack of gameplay was jarring for me. Admittedly I’m not accustomed to Visual Novels or Tactical Role-Playing games. Because of this, the format of Digimon Survive took some time to grow on me, and thankfully it has.

The moment you boot up the game, you are met with amazing visuals that put you inside of the anime. From fully animated cutscenes to talking animation, not a frame of this game is low quality.

This helps a great deal in keeping you engaged at the beginning of the game before you enter the Digital World and are introduced to the combat system. 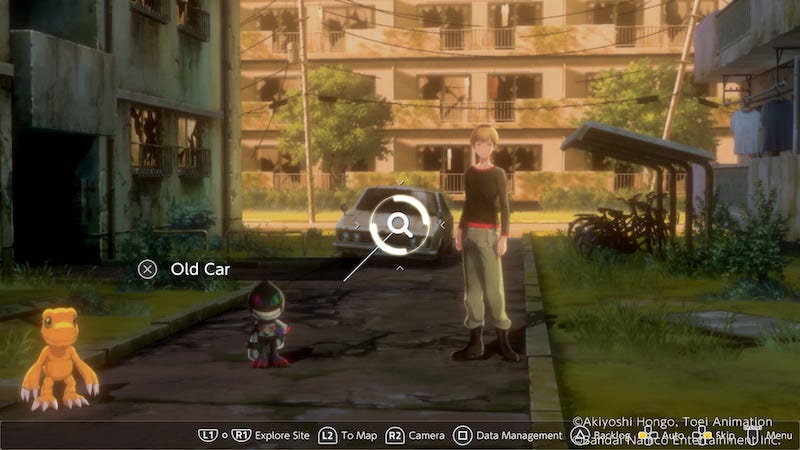 You will spend most of the game talking to friends and fellow Digimon, nurturing relationships with everyone. Increasing affinity with friends and their Digimon will help in battles and effect how the characters see you in the game.

As you progress through, you will encounter phases that allow the player to explore, advance the story, or grow relationships. Like in many other games such as Persona, you will have phases to increase your relationships before the story progresses.

In the relationship phases, you will be allowed only so many interactions with characters before you get cut off and the story continues. This forces the players to choose who they want to be close to and how much.

The closer you become, the closer your Digital companions also become. For me, this was the most challenging part of the game. 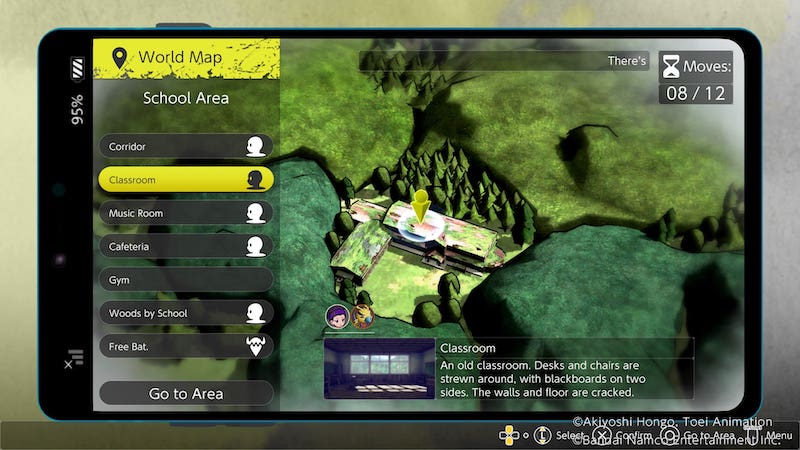 Talking to everyone was somewhat tedious initially, but I quickly started looking forward to my time with the characters. These rest moments are how you get to know everyone around you and when you can explore to find in-battle items. However, the exploration is limited.

Exploring Digimon Survive is being presented with a scene, looking around and interacting with everything, then taking out your phone to decode jumbled-up data for items and sometimes surprise Digimon attacks. Still, your phone’s capability does not stop there.

A large part of the game is spent using the phone, which doubles as your map, Digimon logs, item management and locator, and your Digivice. From it, you can access new areas, permanently Digivolve team members you added to your party, or even opt into free battles.

In these free battles, you can talk to attacking Digimon, and if you answer three questions correctly, you have the opportunity to have them join your team or give you an item.

I found myself jumping into these battles less to train my team and more to acquire Digimon I liked.

A personal quest of mine is to have a whole team of the original anime. As a result, I found myself jumping into battle after battle, trying to learn each Digimon’s preferred answers.

If answered incorrectly, the Digimon will get mad and become enraged. Even if you answer questions right, however, there is a chance they still won’t join your team.

Luckily there is an auto-battle option for cases where the Digimon you seek wasn’t the one you encountered or if you answered the question incorrectly. I frequently utilized the auto battle until I learned the correct answers for each Digimon.

Acquiring Digimon isn’t the only reason to battle. Leveling up your Digimon is also advised to forge ahead in the story and break up some of the long conversation portions of the game.

Inside of combat, each Digimon has its own set of attacks, an amount of area they can move, and types that are either strong or weak to opposing types. The majority of it is surprisingly straightforward. However, the complexity comes from the SP bar. 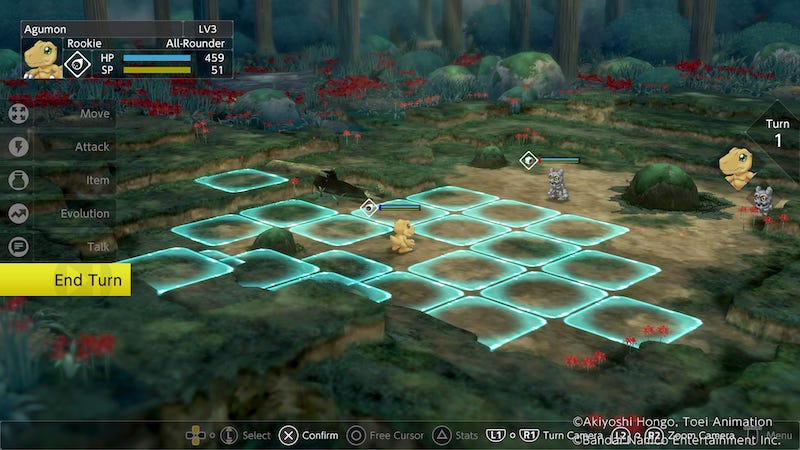 Each Digimon has a limited number of SP that will decrease through the battle after using larger, more powerful attacks.

In the cases of the Digimon tied to the story, they will lose SP if they Digivolve in battle. Once at zero that Digimon will De-Digivolve back to its previous form.

This added layer of systems forces the player to choose the best opportunity to Digivolve. In some cases, it may be for defense, in others for a greater area to move, but most of the time, it is for higher attack power.

While you can permanently evolve additional Digimon that you acquire with items, the partner story Digimon will reach new Digivolutions through the main campaign.

A Digi-Destined Story First And Foremost

I hope you enjoy a story game because Digimon Survive is an emotional, gripping, action-packed adventure with real stakes.

While the combat takes up the majority of the gameplay, the story is the true heart of Digimon Survives, and it doesn’t shy away from it.

The game is not short and, like in anime, doesn’t shy away from building relationships slowly with character development rather than just speedily advancing the plot.

From the moment you meet your partner Agumon, you are tasked with discovering why you are in the strange land and who these creatures are. 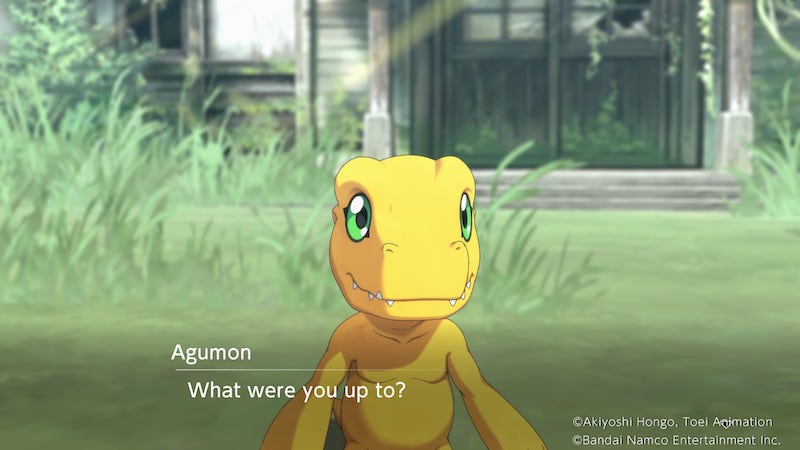 For fans of Digimon Adventure, like me, this game is a dream come true, and the game plays on this.

From the stories and plots of the original show, I found myself taking action and forming opinions of characters based on what I had already experienced.

Matching the characters of Digimon Survive with what I thought their show counterparts were, something many fans are also likely to do.

However times throughout the game, there were twists I didn’t see coming or instances of no Digivolution when I felt there should be.

While this could seem to be a negative, the changes are genuinely refreshing. Seeing something I thought I knew so well still surprise me is a great feeling.

The unexpected twists and the opportunity for a different ending have me ready to return to the Digital World.

Digimon Survive is out now on PS4.

Digimon Survive is an emotional, gripping, action-filled adventure that kept me invested from the moment I entered the Digital World. While the gameplay isn't vast, the combat is deep, and both compliment the Visual Novel style of the game. Digimon Survive may not be for everyone looking for a more direct influence on the story outside of dialogue options, but it delivers on what it promised. An amazing Digimon adventure for a whole new generation.