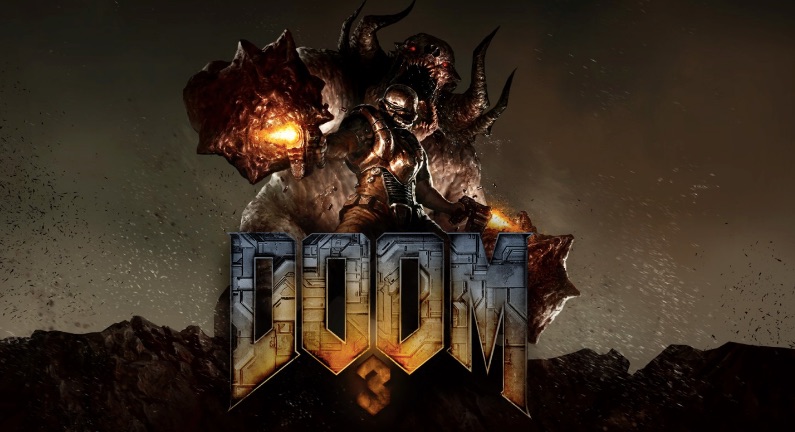 Often referred to as the black sheep of the DOOM family, DOOM 3 sadly doesn’t get quite as much recognition as it deserves. Effectively a remake of the original DOOM, when DOOM 3 landed ten years after the release of DOOM II in 2004, it bowled many over with its then state of the art visuals and cinematic flair. Yet, those same DOOM fans still felt empty, as if DOOM 3 wasn’t really meant for them but rather a whole new audience of FPS gamers that was just beginning to emerge.

And they were right. Sort of.

From the off DOOM 3 immediately feels like a different kettle of fish from its 90s predecessors. A much more cinematic affair, DOOM spends a great deal of time early on introducing the player to their environment and the (still alive!) human denizens that exist within it, as the player freely navigates the environment, talks to NPCs and interacts with various computer consoles – and all of it without firing a single bullet in the first fifteen minutes of play. Amusingly, this is in stark contrast to the original DOOM where three levels could be whipped and a small country’s worth of demons could be murdered in the same period of time.

And even when the action does get going, DOOM 3 doesn’t let up on its narrative either, with the player able to collect all manner of audio logs and text files that provide the backstory to the whole scenario, while a range of (admittedly well done) cutscenes provide ample amounts of suspense, horror and gore to keep contemporary events framed in a dramatic fashion. Oh, and you get to see Doomguy’s face here too, which depending on your mileage is either sacrilege (think Stallone’s Dredd) or a revelation worthy of a vigorous shoulder shrugging.

When the shooting does kick off it’s obvious that despite its numerous technological advantages over the earlier games in the series, that DOOM 3’s gunplay feels a bit, well, limp. Bereft of the forceful satisfaction one gets from a perfectly placed shotgun blast blowing a rampaging imp to pieces, or the thunderous rattle of the iconic Chaingun going about its murderous vocation, enemies in DOOM 3 just sort of get shot and fall to pieces, rather than getting blown to pieces. It’s quite an odd sensation, and one that makes the act of shooting these enemies somewhat less palpable and enjoyable than before.

Equally, DOOM 3 is noticeably slower than both its predecessor and DOOM 2016 too. Gone is that speedy, gliding sensation that the DOOM games typically provide – making you feel as if you could dodge anything at a split-second’s notice, and instead traversal feels much more perfunctory and dare I say it – familiar when compared to the sorts of other non-DOOM FPS efforts that PS4 gamers are regularly exposed to.

Another big step away that DOOM 3 takes from the legendary series is the level design. Eschewing the non-linear, colour keycard driven layouts of the other titles in the series to some degree, DOOM 3 instead pursues a much more linear path of progression, forcing the player down corridors and through tunnels as they attempt to reach the end of each area before moving onto the next.

That said however, while DOOM 3 does arguably lack the design freedom of its predecessors, it does still permit the player a fair amount of freedom to explore wherever they like – it’s just that by comparison the single keycard barriers and smaller, more boxy environments both conspire to make DOOM 3 feel much less open than its franchise brethren.

It isn’t long though before DOOM 3’s modus operandi reveals itself however and it’s this – DOOM 3 is actually a low-key well-executed and deeply atmospheric shooter that relies on darkness, shadows and jump scares in a way that no game in the series has done before, or since. The fact that you are equipped with a battery burning torch is proof of this, as when the lights go out (which is frequently), you’ll have to switch on your trusty flashlight to break through the gloom.

Neatly, in DOOM 3 the folks at id Software take full advantage of this scenario too, placing enemies in dark corners – with only their piercing red eyes giving them away in the pitch black, while Imps smash through vents and hulking demons crash through doors; all in an effort to unsettle and scare the player. And some fifteen years after its original release, DOOM 3 still manages to bring the scares and the frights with grotesquely calculated verve, not least on account of the fact that lighting and shadow work remains top notch, even when seen today.

The shift to full 3D environments and character models also means that classic DOOM’s iconic enemies are reimagined, and for the most part those ‘new’ designs are truly terrifying. From the jagged and scarred visage of the Imp (itself a now towering seven foot monstrosity that can crawl along surfaces), to the grotesque walking corpses in various states of decay and the hulking charging demons that truly look like an apparition from the depths of nightmare, DOOM 3 does a grand job of re-imagining the Doomguy’s erstwhile foes with newfound terrifying detail and flair.

Ported by Panic Button, those same bunch of port wizards who somehow managed to brilliantly squeeze full fat DOOM 2016, DOOM Eternal and Wolfenstein II: The New Colossus onto the tech-strapped Nintendo Switch, DOOM 3 looks the best it ever has on PS4. Boasting a constant and unbreakable 60 frames per second in addition to the aforementioned stellar shadow and effects work, it bears remembering that DOOM 3 came out during the PS2 generation and yet, looks like the sort of title that is a whole generation ahead of its time technically speaking. PS4 Pro owners also get a nice bonus in the shape of full native 4K support, too.

Content-wise too, DOOM 3 on PS4 is pretty well endowed to say the least. Though there is no multiplayer mode (this was implemented much later for PC gamers post release back in the day and generally wasn’t regarded too highly), DOOM 3 includes all of the official single player content that was ever released for the game including the Resurrection of Evil and Lost Mission expansion packs. In short, you’re getting ample DOOM 3 bang for your buck to say the least, so value isn’t really a concern here.

Though I know that DOOM 3 isn’t really a patch on the original DOOM (or its stellar 2016 reimagining), I also know that it’s very different beast from those games too – trading in fast-paced frenetic ultraviolence, for slower, more carefully considered horror, jumps and scares. While that shift will disgruntle many, it seems that gamers in 2019 might just be more accepting of DOOM 3’s more nuanced, atmospheric shenanigans than folks were back in 2004. Give it a try – you might be surprised.

Though not in the same qualitative orbit as its illustrious predecessor or more modern reboot, DOOM 3 nonetheless carves out a niche for itself as a highly atmospheric and tense FPS, the likes of which id Software has not graced the series with again since 2004. Though history has perhaps remembered DOOM 3 harshly, contemporary gamers will likely find much to enjoy in its darkly portentous atmospherics and frequent scares.