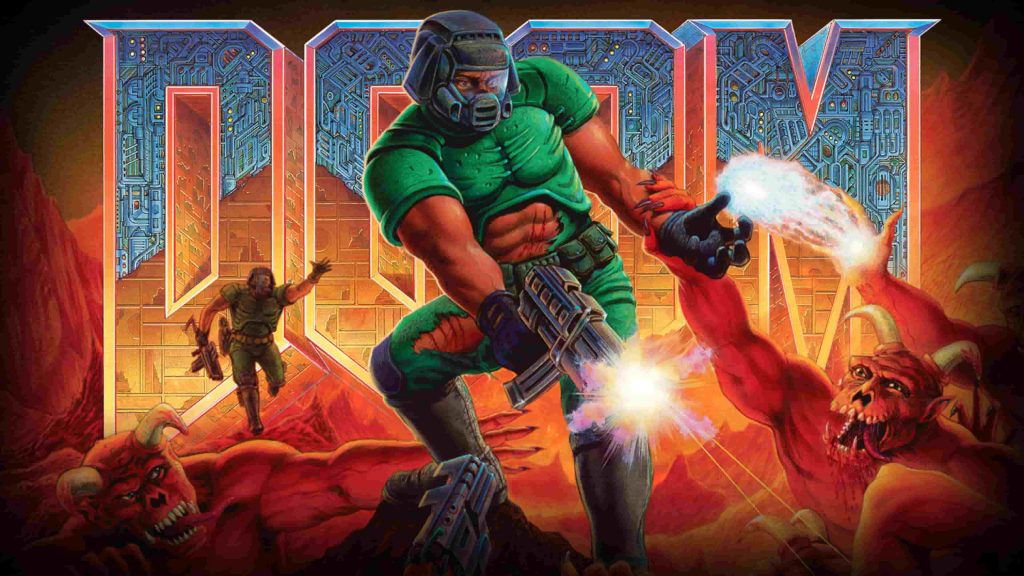 If you ask me (not that you did), every single platform made should have a port of DOOM Classic on it. Yes, everything from watches to microwaves have been had one port or another of id Software’s genre defining classic, but it’s really the menagerie of home consoles and mobile devices that need the port more than most – not least because it inarguably reminds people what a real FPS looks and plays like when not subjected to the whims of overly linear design and a nauseating amount of cutscenes.

DOOM Classic Is Every Bit As Good As You Remember

For the two of you who have never played DOOM before, the premise is deliciously simple. You are Doomguy, a space marine that must stop the invasion of Hell via a series of open portals on a Martian base, and the way you win is by literally killing everything with increasingly more powerful weaponry before moving onto the next area and doing the same.

And what weapons they are too. From the humble handgun all the way through to the room clearing BFG, every single gun in DOOM (especially the combat shotgun) feels as good to fire now in 2019 as it did in 1993. Matching the satisfaction of employing these weapons is the very different types of monsters you’ll be using them against, with the numerous demonic soldiers, imps, Barons of Hell and Cacodemons all providing different challenges that require varying strategies to overcome.

After what seems like an eternity of being exposed to slowly paced, po-faced military shooters (DOOM 2016 and Bulletstorm notwithstanding), the frantic hyper-speed of DOOM’s full sprint movement is extremely eye-opening. Indeed, if you thought it was just the shotguns, rocket launchers and chainsaws in DOOM that made you a force to be reckoned with, you’d be wrong – as instead that lightning quick speed that DOOM affords the player allows you to effortless glide across surfaces, flank and ambush enemies at lightning speed. In short, DOOM still feels great.

One of the biggest feathers in the Classic DOOM’s design cap which many folks tend to forget is just how non-linear it is. Ultimately, while you are supposed to kill everything and move on, the actual objective is just to simply reach the end of the level – collecting the various color-coded keycards to open up the matching doors in order to get there.

However, how you actually go about doing that is up to you as DOOM lets you tackle its levels however you like – there’s no artificial blocking off of areas you’ve been in previously and no funnelling you down a particular path. It’s surprising how, even in this day and age, just how freeing that feels.

There’s more to do than just blasting baddies too, as another aspect of DOOM’s trailblazing design which has stood the test of time is its secrets. While every level is generously stuffed with monsters to kill and weapons to collect, so too is each one absolutely rammed to the hilt with ingenious secrets that test your brain as much as they do your trigger finger and when discovered, provide a bespoke sense of euphoric satisfaction to say the least.

As to the quality of this port, Bethesda have clearly not done a half job here. Content-wise you not only get the full DOOM experience, but you also get the bonus fourth episode featured in Ultimate DOOM, and the PS4 version of Classic DOOM also supports local co-op multiplayer and deathmatch game modes for up to four players – a very welcome inclusion indeed.

In terms of performance, DOOM Classic runs as well as it as ever has, with the increase in resolution creating a much sharper presentation than has been possible in previous console versions of the game. However, the presence of a slight border seems utterly unnecessary when taking into account the power that current-gen consoles provide. The music too makes the leap unblemished to PS4, as do the controls which map perfectly to the Dualshock 4 and are a pleasure to use.

Of course there will be some aspects of DOOM Classic that will grate and which haven’t aged quite so well. The multiplayer, while a great addition, is local only and the dated game engine means that those folks looking for a jump or crouch button, or even the ability to look up and down will be disappointed. But look, this is Classic DOOM, and Bethesda has brought to us in as fine a form as it has ever been in, and if you’re a fan of the FPS genre who hasn’t played it yet, or you’re an oldie like me that wants to relive the halcyon days of the genre, then there is pretty much no better way to do it than this.

DOOM Classic is out now on PS4.

Though some aspects of DOOM Classic are crusty by today's standards, there's no denying that DOOM Classic is an absolutely ultra-pure distillation of the FPS genre and this PS4 port ranks as the best console port ever made. Get on this.